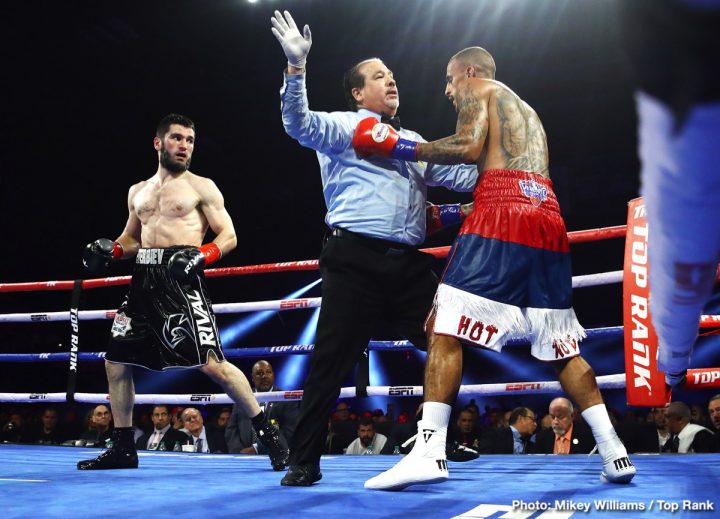 The inside fighting ability of Beterbiev was extraordinary. He got the better of Kalajdzic the entire fighting, working him over on the inside with short, powerful punches to the head. When Kalajdzic attempted to hold, Beterbiev would work a hand free and nail him with multiple rapid fire left hooks one after another. These were powerful shots that Beterbiev was throwing at close range. He didn’t need to get leverage on the shots for him to generate massive power. Kalajdzic was getting worked over by Beterbiev the entire fight each time he would get in close.

Beterbiev, 34, hurt Kalajdzic, and had him out on his feet looking defenseless in the fifth round when referee Dan Stell stepped in and stopped the contest. The official time of the stoppage was at 0:13 of round five. Beterbiev knocked Kalajdzic, 27, down late in the third round after trapping him against the ropes. Kalajdzic almost fell through the ropes. When the action resumed, Beterbiev nailed Kalajdzic with two heavy right hands that staggered him as the round ended. Kalajdzic looked hurt enough for the fight to be arguably stopped, but the referee let the contest continue. Kalajdzic staggered back to his career. It was obvious at the time that Kalajdzic wasn’t going to last too much longer.

In the fourth round, Kalajdzic suddenly came to live when he was trapped against the ropes by Beterbiev. Kalajdzic nailed Beterbiev with a quick of flurry with hard shots on the inside that momentarily slowed his progress early in the round. However, Beterbiev backed up for a second, and then resumed taking the fight to Kalajdzic on the inside. Before the start of the 4th round, the ringside doctor met with Kalajdzic to look him over to make sure that he was in good enough shape to continue fighting. Kalajdzic had been dropped in the third round by Beterbiev, and looked close to being stopped as the round ended. Kalajdzic walked over to the ringside doctor on unsteady legs at the end of the round.

Kalajdzic tried to keep the action on the outside, but Beterbiev run forward quickly to close the distance, and force the fight to take place at close range. The taller, longer-armed 6’2″ Kalajdzic lacked the inside fighting ability to contend with Beterbiev when he was in close. Although Kalajdzic landed some good shots at times, his power was mostly smothered by Beterbiev staying on the inside. Beterbiev was able to throw with a lot of power when he was at close range. Kalajdzic was getting pummeled by Beterbiev the entire fight when the Russian fighter was on the inside. The problem that Kalajdzic had was he couldn’t keep the action on the outside to negate Beterbiev’s offense. When Kalajdzic did get space between them, Beterbiev would charge forward like a bull, and be on top of him to punch it out at close range. Holding and grappling didn’t work for Kalajdzic, as Beterbiev would work an arm free and tag him him with hard shots to the head and body.

Beterbiev showed that he’s easily the best inside fighter in the division. It’s not surprising that Andre Ward, a fighter known for being a good inside fighter, retired without facing Beterbiev. Ward would have had a lot of problems in trying to deal with Beterbiev’s inside game. The power, the upper body strength, and the ability of Beterbiev to get so much on his shots at close range would have been a nightmare for Ward had he chose to fight him instead of retiring.

There was a big crowd of 10,105 that showed up to see the Beterbiev vs. Kalajdzic card at the Stockton Arena last night. That was an impressive showing given that Beterbiev is from Russia, and lives now in Canada. It might have been better for Top Rank to have staged the fight in Washington state or Oregon.

Beterbiev wants to unify the light heavyweight division against 175-pound champions Dmitry Bivol, Sergey Kovalev and Oleksandr Gvozdyk. Beterbiev’s promoter Bob Arum of Top Rank was asked last night if he’d be interested in matching Beterbiev against Kovalev or Bivol, but he seemed more interested in putting him in with World Boxing Council champion Gvozdyk, who he says might be the best fighters in the light heavyweight division today.

The way that Bivol and Beterbiev have been looking lately, Gvozdyk would have major problems against either of them. They’re not old like Gvozdyk’s recent opponent 41-year-old Adonis Stevenson, and they’re a lot more aggressive. Gvozdyk might actually be the most flawed of the current champions, but you can understand why Arum would want him to be the guy that faces Beterbiev rather than the highly popular Kovalev, who he promotes, and the non-Top Rank promoted Bivol.

”At least he don’t have to worry about the judges, right? Beterbiev’s promoter Bob Arum said to Dontae’s Boxing Nation about the many knockouts on Top Rank’s card last Saturday night at the Stockton Arena in Stockton, California. ”It takes it out of the hands of the judges.”

There were a lot of knockouts on last Saturday night’s Top Rank promoted card at the Stockton Arena, which had a few mismatches on them. In addition to the Beterbiev vs. Kalajdzic fight, IBF super flyweight champion Jerwin Ancajas scored an easy 7th round knockout over Ryuichi Funai in a one-sided fight from start to finish, and light heavyweight Felix Velara stopped Mario Aguilar in the fourth round. All three of those fights were mismatches, and not particularly competitive in the least.

”Well, what about [Oleksandr] Gvozdyk?” Arum said when asked if he would be interested in matching Beterbiev against WBO light heavyweight champion Sergey Kovalev or WBA champion Dmitry Bivol next. ”Gvozdyk maybe the best of all of them. Any of them, and don’t forget about Gilberto Ramirez. He’s now at 175. There’s a lot of talent at 175, and he figures with any of them. Well, they all fight for Top Rank. He’s [Beterbiev] out of commission for now, Beterbiev, because he has Ramadan for the month, and then he gets into training. So the earliest he can come back is probably October,” Arum said.

WBC light heavyweight champion Oleksandr Gvozdyk (17-0, 14 KOs) is coming off of a fifth round knockout victory over Doudou Ngumbu (38-0, 14 KOs) two months ago on March 30th. That was a soft opponent for Gvozdyk, and he looked good in that fight. However, Gvozdyk was losing to 41-year-old former WBC champion Adonis Stevenson when he stopped him in the 11th. The fight ended tragically with Stevenson collapsing afterwards, and requiring brain surgery. If Stevenson had been younger, he likely would have beaten Gvozdyk. Beterbiev is fighting on a higher level than Gvozdyk right now. With Beterbiev’s inside fighting ability, Gvozdyk would be helpless, because he’s not a good inside fighter. Arum likely won’t let Beterbiev get anywhere near Kovalev, because he brings in good ratings on ESPN.

If Beterbiev destroys Kovalev, Arum would be cutting off one of his revenue streams. Bivol isn’t promoted by Top Rank, so that’s not a fight that will likely happen between him and Beterbiev. Former WBO super middleweight champion Gilberto ‘Zurdo’ Ramirez is someone that Arum wants to match against Kovalev. Arum likely won’t let Ramirez face Beterbiev, because that’s a bad match-up for Ramirez, who likes to fight on the inside. Ramirez is nowhere near the level of Beterbiev in terms of his ability to punch and fight in close. That would likely be a mismatch in favor or Beterbiev. For that reason, Arum is probably keep Gilberto Ramirez far away from Beterbiev. Arum probably won’t let Beterbiev fight Gvozdyk either, because that would be cutting off one of his revenue streams as well. He’ll talk about wanting to make the fight, but he likely won’t make it. Having more champions at 175 is better than consolidating the belts with one champion promoted by Top Rank holding all the straps.

“I worked very hard for this fight. I went 100 percent in the gym. Maybe one day I’ll show my boxing skills,” Beterbiev said. “I want unification fights. It doesn’t matter who it is. I am happy to be working with Top Rank and ESPN.” 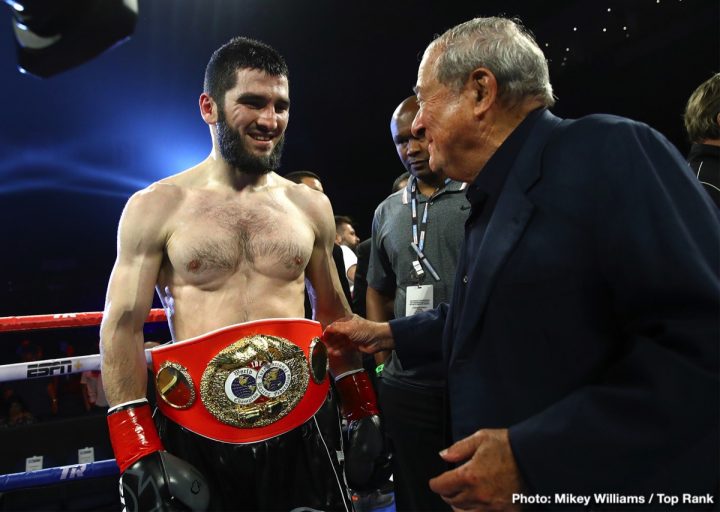 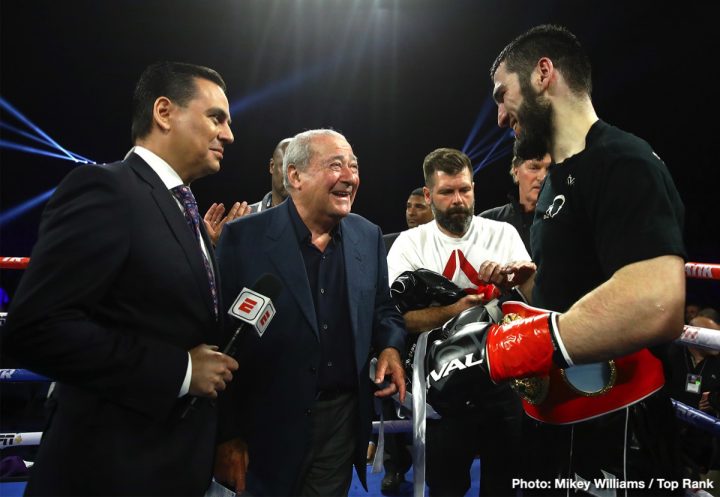 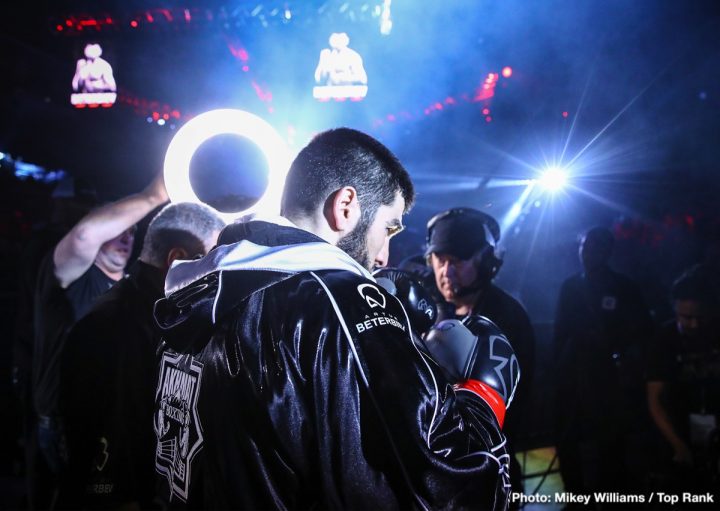 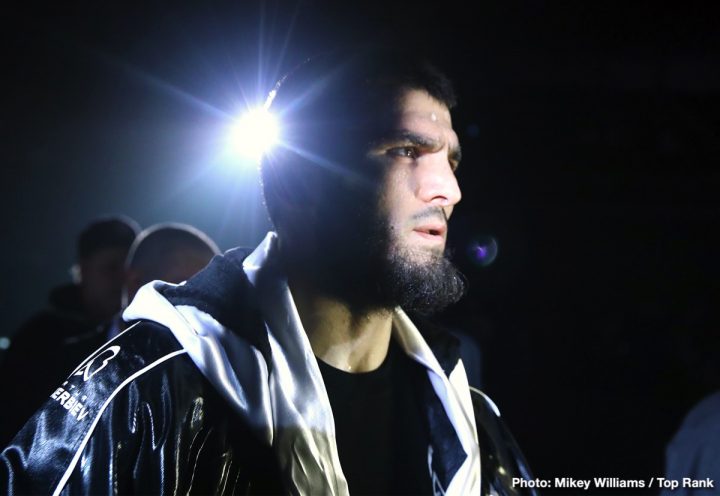 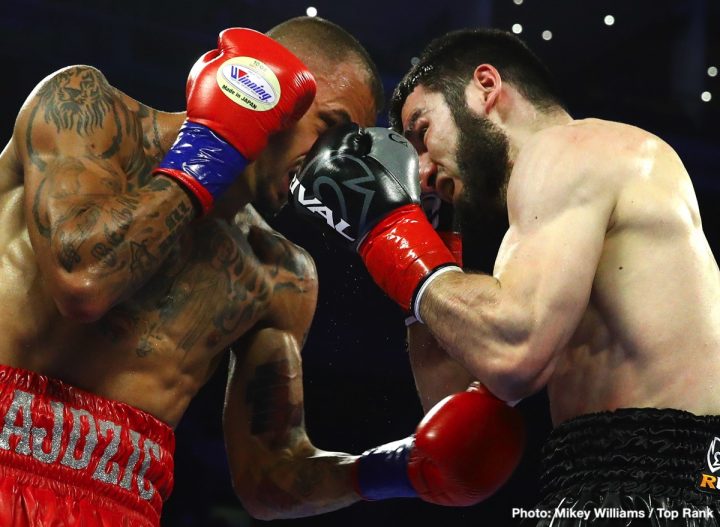 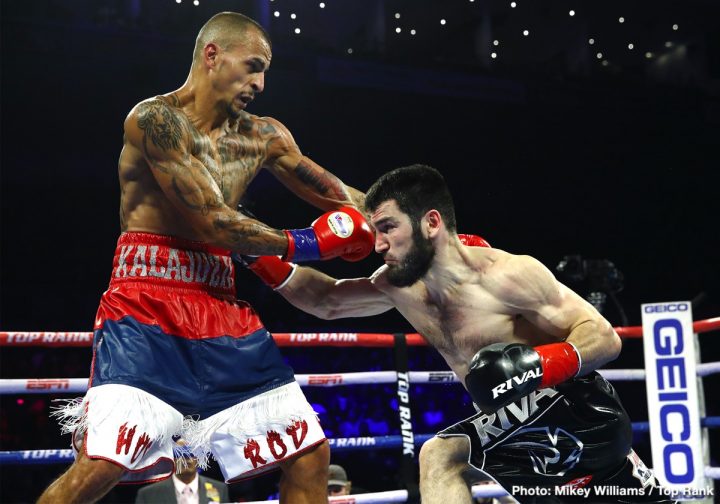 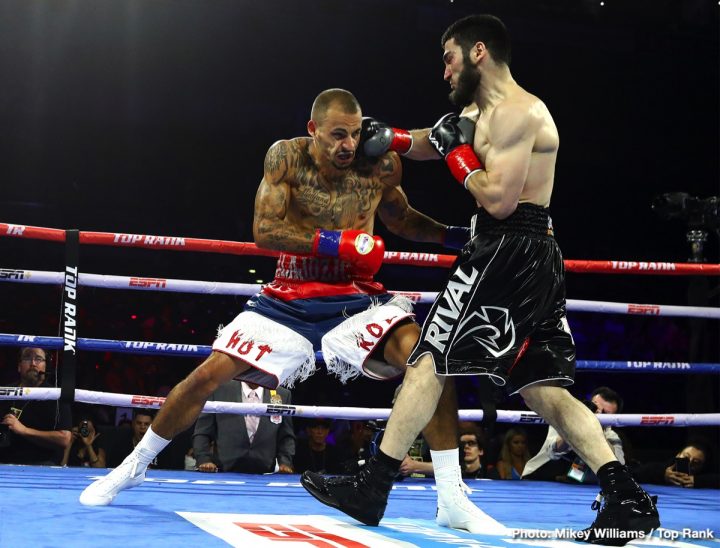 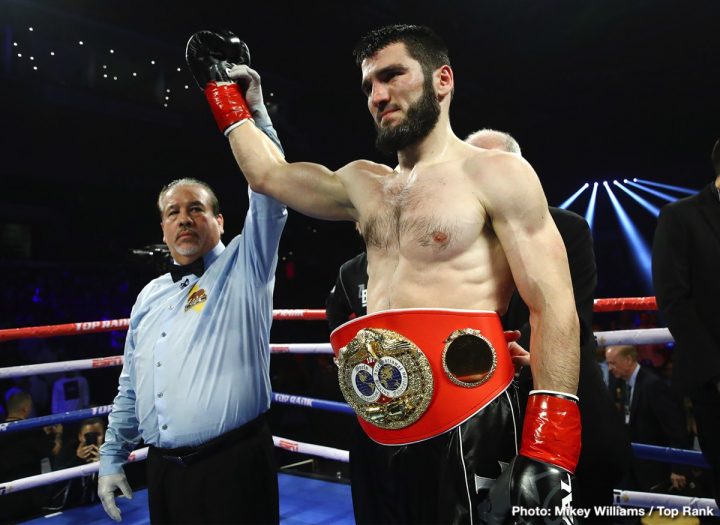 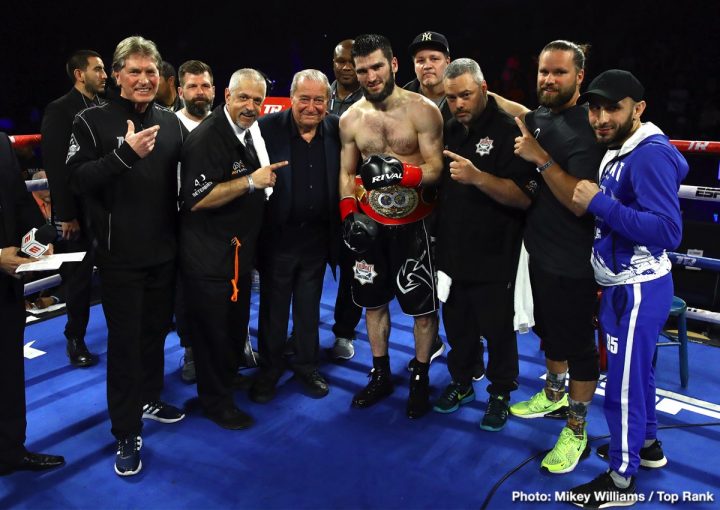 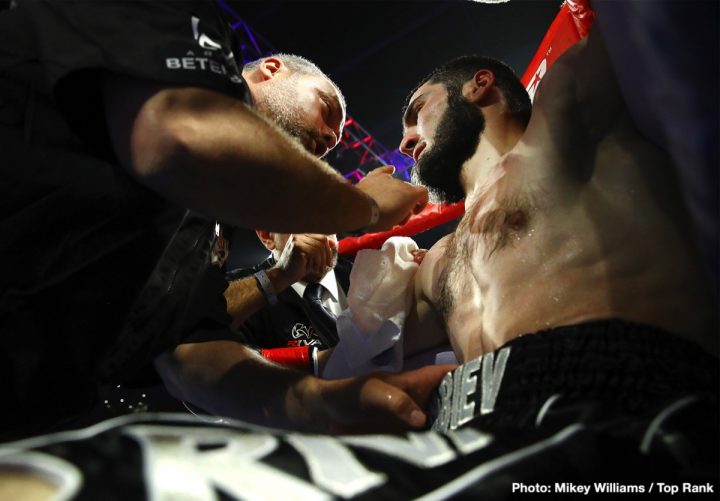 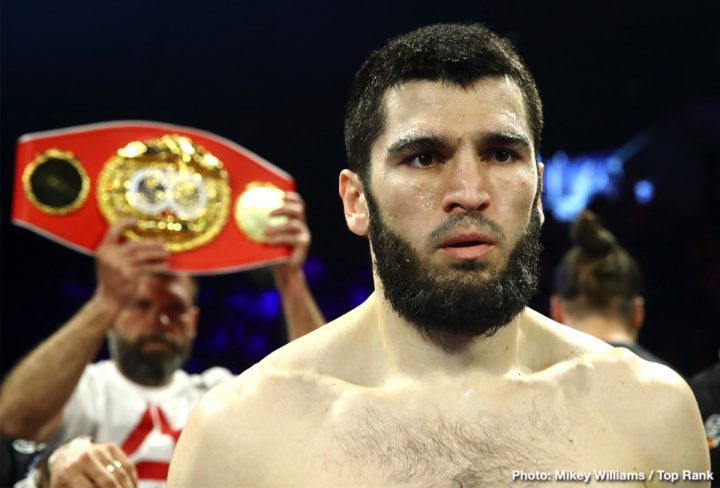 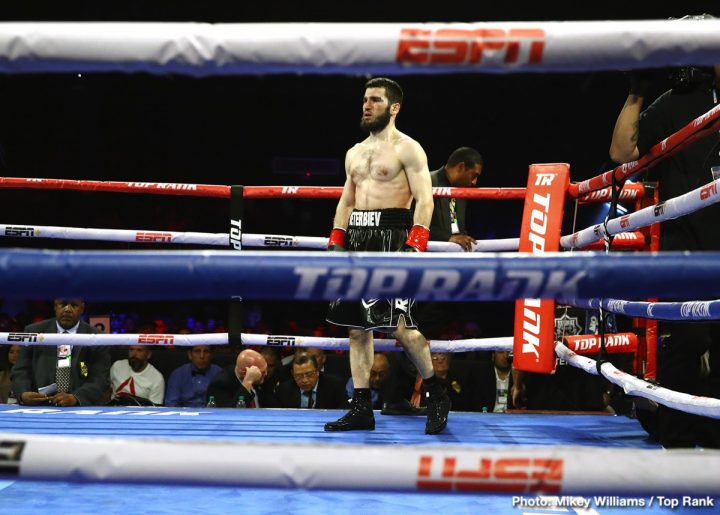 
« Jacobs: I did enough to beat Canelo