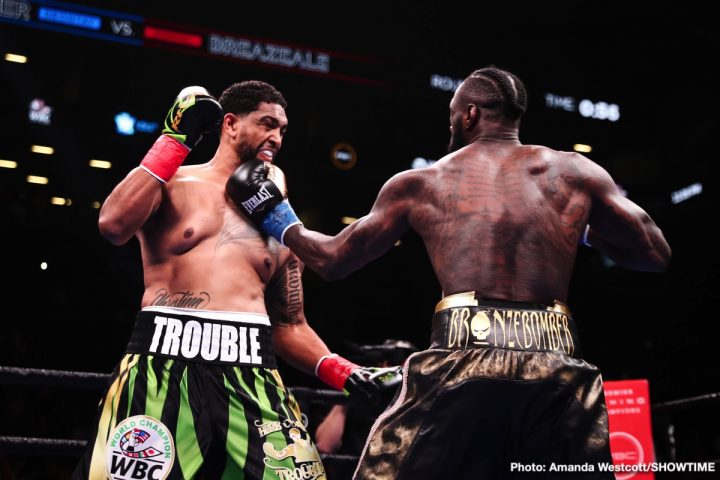 Breazeale (20-2, 18 KOs) failed to last one round under the heavy artillery that Wilder was hitting him with last Saturday night at the Barclays Center in Brooklyn, New York. To be precise, Wilder hit Breazeale hard just two times in the fight with big right hands. Both times, Breazeale, 33, was badly hurt. The one-punch power that Wilder exhibited in the fight last night was something to behold.

For the boxing fans that don’t remember, it took Joshua seven rounds to knockout Breazeale in 2016, and he was hitting him repeatedly with his best right hands with no effect. The difference in power between Wilder and Joshua is extreme. Joshua might be a little too muscle-bound to possess the power that we saw from Wilder last Saturday night.

Here’s what Fury had to say about Wilder on his Instagram in giving him credit for his win over Dominic:

“Well done to Deontay Wilder in knocking out Dominic Breazeale. I got that prediction quite correct. Anyone that wants to go toe-to-toe with Deontay Wilder with have the same fate as Dominic Breazeale, and the rest of his other 40 victims. Anthony Joshua, you’ll get it as well. The same thing will happen to Dillian Whyte. You’ll get it as well. The Bronze Bomber is the most feared, the most destructive puncher in the heavyweight division. It’s just a pity that he lost to the Gypsy King. Anyone that stands in front of Deontay Wilder is going to get knocked out. Deontay Wilder is the second baddest man on the planet behind the Gypsy King AKA Tyson Fury, the #1 heavyweight in the world. Nobody can beat me. I can’t be touched.”

The fans wanted to see a rematch between Wilder and Fury, but Top Rank, the new promoters for Tyson, chose to match him against Tom Schwarz. Fury went along with the idea. Some boxing fans believe Fury doesn’t fancy the idea of getting back into the ring with Wilder after the way he was knocked down in the 12th round by him.

Wilder got back to his winning ways with his stoppage win over Breazeale. It was a good win for the 6’7″ Deontay. He had been held to a draw in his previous fight against the slippery, eel-like Fury last December, and he clearly was happy to have a more aggressive opponent standing in front of him that was interested in fighting him rather than spoiling for 12 round. The right hand that Wilder hit Breazeale with for the knockout would have stopped anyone in the division.

For the record, Fury didn’t beat Wilder last December in Los Angeles, California. The fight was ruled a 12 round draw after knocked Fury out in the 12th round. The referee gave the unconscious Fury a count. He was in the same situation as Breazeale was in. You can argue the fight should have been stopped on the spot once Fury was put down and was lying there out cold. Wilder and his trainer don’t blame Fury for not wanting to fight him again. They agree with Fury’s decision to take some easy tune-ups to test out whether he’s still there physically following his knockout. If Fury’s punch resistance is gone, which is a possibility, it’s better that he’s in there with weaker guys like Tom Schwarz rather than a fighter with one-punch power like Deontay.

Whyte was almost knocked out by Joseph Parker last year in their fight in London, England. The only round in the fight where Parker aggressively was in the 12th and he had Whyte ready to be knocked out. It’s hard to imagine Whyte making it passed the first round against Wilder. It’s quite possible he would suffer the same fate as Breazeale. Whyte has a weight problem as well. All that extra fat that he carries around would make him an easy target for Wilder to land his right hands.

“There’s been a lot of animosity and a lot of words that were said and it just came out of me tonight,” Wilder said about Breazeale.

Congrats @bronzebomber but your the second baddest man on the planet behind me.👍🏻

Before the knockout, Wilder had hurt Breazeale with a right hand to the head at the Barclays Center. Breazeale showed great recuperative powers, as he regained his senses after covering up. Wilder left himself open for a right hand counter from Breazeale. The shot hurt Wilder. He clearly thought that Breazeale was done. It was the same situation for Wilder that we saw from him in his fight against Luis Ortiz in March 2018. When Wilder had Ortiz trapped against the ropes in the seventh round, he thought he was going to finish the talented Cuban fighter. Out of nowhere, Ortiz landed a left to the head that hurt Wilder. Breazeale did the same thing last night. Wilder’s went to jelly for a split second, and he backed up. Breazeale clearly thought he had him, because he came forward throwing shots and looking confident. After the two of them clinched, Wilder finished the job by nailing Breazeale with a right hand to the head that dropped him. Breazeale showed a lot of heart in trying to get up from the knockdown, but the referee Harvey Dock stopped the fight at 2:17 of the round.

Joshua would obviously have some kind of strategy to try and negate Wilder’s power. He would stay on the outside like he did against Parker, which would be a huge mistake, or stay in close to keep Deontay from getting leverage on his shots. For Joshua to get close, he would get hit flush with right hands. Since he couldn’t take 40-year-old Wladimir Klitschko’s right hands, it’s difficult to picture Joshua being able to take Wilder’s right hand power shots for any length of time.

When I hit him with the right hand the first time, his body language changed,” Wilder said about Breazeale.

Breazeale wasn’t as aggressive after being hurt by the initial big right hand that Wilder tagged him with in the first round. Moments later, Breazeale came back strong in hurting Wilder with a right hand. There was a brief moment in the fight where it looked like Breazeale was on the verge of making history by knocking out Wilder. It wasn’t meant to be. Breazeale left himself open for a right hand from Wilder, and he was knocked out.