Hearn: Joshua vs. Wilder must happen next 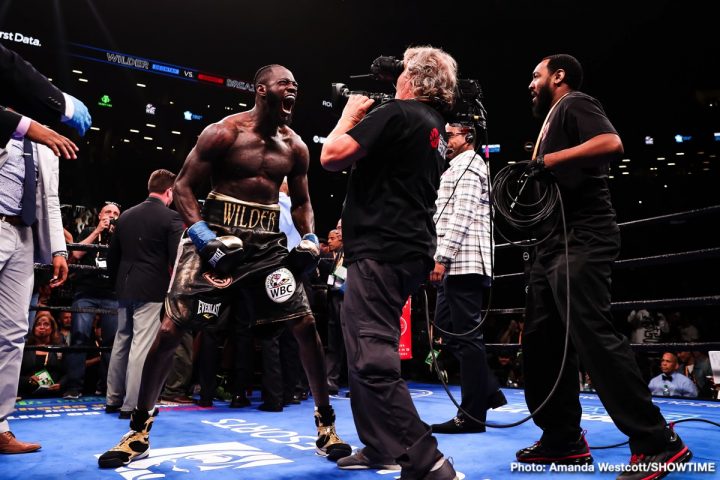 By Charles Brun: Matchroom boss Eddie Hearn insists that the unification fight between heavyweight champions Anthony Joshua and Deontay Wilder must happen next, provided that AJ wins his fight against Andy Ruiz Jr. on June 1. Wilder successfully defended his WBC heavyweight title last Saturday night in knocking out Dominic Breazeale in the first round at the Barclays Center in Brooklyn, New York,

Hearn says that Wilder (41-0-1, 40 KOs) did his part in beating Breazeale (21-2, 18 KOs), and Joshua has to do his business by beating Ruiz Jr. (32-1, 21 KOs) on June 1 live on DAZN and Sky Sports Box Office at Madison Square Garden in New York. Wilder knocked Breazeale out with a peach of a right hand in the first round last night. The boxing fans will be still be talking about that knockout months from now. It puts Joshua in a bad place unfortunately, because now he has loads of pressure on him to try and top what Wilder did when he faces Ruiz Jr. next month. Joshua is going to be taking a big risk if he tries to hurry a knockout against Ruiz. Joshua’s stamina is poor due to all the muscles he carries, and his punch resistance isn’t extraordinary either.

Joshua’s promoter Hearn says he wants the Wilder fight, but not likely enough for him to agree to give American knockout artist the 50% cut of the revenue that he’s been asking for all along. The fight can easily be done, but with and Joshua being unwilling to give Wilder an even split. Their insistence in taking the lion’s share of the revenue will likely continue to prevent the match from getting made. Hearn’s approach to the negotiations with Wilder has been confusing. Despite Wilder telling Hearn repeatedly that he wants a 50-50 deal, the promoter has come each time with less than what he’s asked for. At the same time, Hearn has played to the public by complaining about Wilder not agreeing to the fight.

Wilder’s first round knockout victory over Breazeale has set the bar high for Joshua to try and top in his fight against the American Ruiz Jr. Joshua hits hard, but he’s not the type that knocks guys out early in his fights unless it’s a journeyman level fighter. Joshua pushes his shots rather than explodes with them. That’s one of the flaws that Joshua has. He has too much muscle for him to throw with the speed that guys like Wilder possess. If Joshua tries to score a fast knockout of Ruiz, he might get clipped by the American, who has faster hands than him, and almost equal power. It would be a mistake for Joshua to foolishly try and score a fast knockout of a guy like Ruiz. Joshua should fight the way he always does by being methodical.

“That was an impressive win for Deontay – he’s exciting to watch,” Hearn said to skysports.com. “He has taken care of business, now AJ needs to do the same against Ruiz Jr at Madison Square Garden on June 1. The fight with AJ and Wilder is the biggest fight in the sport and all being well in two weeks’ time it must happen next – no excuses, this is the fight that will change the sport globally.”

The common belief is the Wilder vs. Joshua fight won’t be happening next, no matter how good AJ looks in beating the 260+ pound Ruiz Jr. on June 1. Hearn likely won’t offer Wilder the 50-50 split that he’s asking for to face Joshua. As such, Wilder will be most likely be fighting Luis “King Kong” Ortiz in a rematch later this year. Joshua will wind up facing either his IBF mandatory Kubrat Pulev or Matchroom fighter Oleksandr Usyk. Hearn is chomping at the bit to put the cruiserweight champion Usyk in with Joshua.

Since Hearn isn’t going to offer Wilder a 50-50 deal, the Joshua-Wilder won’t happen next or even in the fight after. Hearn feels that Joshua holding three of the four titles at heavyweight means he should get the bigger purse split. The problem with that belief is world titles only mean something when you win them from talented fighters. Joshua captured his world titles at heavyweight beating these guys:

Those aren’t good enough fighters for Joshua’s titles to mean anything. Wladimir was a talented fighter earlier in his career, but by the time he fought Joshua, he was 40-years-old, coming off of a two-year layoff and a loss to Tyson Fury. The fact that Wladimir didn’t even feel it was necessary to take a tune-up after two years out of the ring before fighting Joshua, was a red flag that this was just a cash out fight for the Ukrainian fighter in the eyes of a lot of boxing fans. If Joshua had beaten talented fighters in their prime to capture all his heavyweight titles, it would mean something for him to hold more belts than Wilder, but that didn’t happen. Wilder arguably beat a better fighter in Bermane Stiverne than the guys Joshua defeated to win his belts.

The sooner Hearn and Joshua decide to meet Wilder’s asking price the faster the fight will get done. It appears that Hearn is hoping that he can wear Wilder down by offering him less than what he’s asking for. As Albert Einstein once said, “Insanity is doing the same thing over and over again, but expecting different results.” Hearn would be better off in breaking the routine of offering Wilder smaller splits, and give him what he wants. Of course, we don’t know whether it’s Eddie that is the one that’s behind all of the offers. If it’s his father Barry Hearn that is making the call on the purse splits, then Eddie doesn’t have the final say. The question is will Barry, an old school promoter, give in to what Wilder’s demand is for the fight or will he choose to continue to match him against guys that will enable Joshua to get the lion’s share of the revenue?

“It’s a legacy fight and AJ wants it so bad. Two big, fast, dangerous and fearless world heavyweight world champions that can turn the lights out with a blink of the eye – it’s a must,” Hearn said about wanting to put the unification fight together between Joshua and Wilder.

Hearn could call Wilder’s bluff by offering him the 50-50 split that he’s asking for. However, that would be a risky move on Hearn’s part if he weren’t serious about the offer, considering that if Wilder agreed to it, he would look bad if he didn’t make the fight with him.