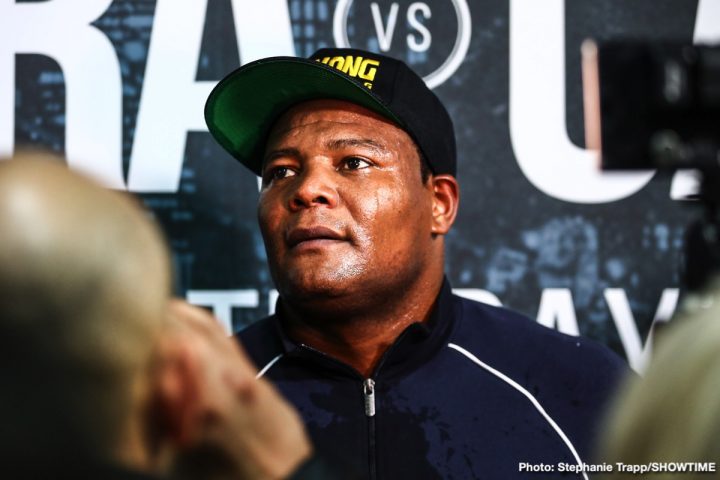 By Barry Holbrook: WBC heavyweight champion Deontay Wilder is heading towards a rematch against Luis ‘King Kong’ Ortiz in September on Premier Boxing Champions at the Staples Center in Los Angeles, California, according to the LA Times.

This news puts a damper on the much hoped for unification fight between IBF/WBA/WBO heavyweight champion Anthony Joshua and Wilder for November or December. Joshua and his promoter Eddie Hearn are hoping that a fight with the unbeaten Wilder (41-0-1, 40 KOs) can get made for later this year, but it doesn’t appears that’s going to happen.

It shouldn’t be a surprise to boxing fans that the talented Cuban Ortiz, 40, will be the next opponent for Wilder, as his name had already been leaked as his next challenger. The plan is for Wilder to face Ortiz (31-1, 26 KOs) followed by unbeaten Adam Kownacki (19-0, 15 KOs). After those two fights, a rematch between Wilder and lineal heavyweight champion Tyson Fury (27-0-1, 19 KOs) is expected to take place. So, what we’re looking at is Wilder fighting these three fighters in this order:

After those three fights, then Joshua could be next in line for Wilder depending on whether the World Boxing Council are ready to order him to defend against the mandatory challenger by that time. Matchroom promoter Eddie Hearn is trying to position one of his fighters Dillian Whyte in what he hopes will be eliminator against Oscar Rivas on July 20. If the WBC choose not to agree to that fight being an eliminator, then Whyte will need to fight someone else. Hearn thinks that Fury will fight Whyte in an eliminator. That’s not likely to happen, because Fury sees himself beyond eliminators due to his popularity and and the fact that he’s the lineal heavyweight champion, which he’s really playing up.

Wilder vs. Ortiz rematch not in high demand

There aren’t a lot of boxing fans calling for a rematch between Wilder and Ortiz. Wilder made it clear that he was the better fighter than Ortiz a year ago, stopping him in the 10th round on March 3 at the Barclays Center in Brooklyn, New York. Ortiz fought admirably, hurting Wilder in the seventh round, and coming shockingly close to knocking him out. However, Ortiz emptied his tank entirely in the seventh round, and was fighting on fumes from that point on. Wilder boxed Ortiz in the eighth round, and then hurt him in the last minute of the ninth. In the 10th, Wilder finished Ortiz off with a hail of power shots that left the Cuban on the canvas badly hurt.

Wilder’s recent performance against Dominic Breazeale on May 18th has increased his popularity to the extent that boxing fans will want to see him against anyone. They won’t care if Wilder fights Ortiz again, because they want to see him fight, period. Ortiz has won his last three fights in beating Razvan Cojanu, Travis Kauffman and Christian Hammer. Ortiz looked good in that fight. He continues to be avoided by a lot of fighters, including Joshua. AJ had a chance to fight Ortiz, but he wasn’t willing to meet his asking price to get him to fill in for Jarrell ‘Big Baby’ Miller on June 1. Joshua’s U.S debut would be so much bigger if he were facing Ortiz instead of Andy Ruiz Jr. There aren’t a lot of casual boxing fans that are eager to see Joshua and Ruiz Jr. to fight, but Hearn thinks there is.

Joshua and Hearn have both been working overtime using Wilder’s name to build up interest in Saturday’s fight against Ruiz Jr. Wilder can badly undercut Joshua’s name dropping efforts by announcing his rematch with Ortiz before this Saturday. If Wilder does that, then Hearn and Joshua will need to focus all their attention on the Ruiz Jr. fight, which hasn’t attracted a lot of interest from fans. Of course, Joshua and his promoter Hearn can talk up a fight with Tyson Fury, but that won’t gain nearly as much traction with American boxing fans as them name dropping Wilder’s name.

Fury isn’t well known in the U.S yet, because he only had that one fight against Wilder last December, and he didn’t do too well in getting dropped twice. Fury is now scheduled to fight obscure heavyweight Tom Schwarz. Fury’s new promoters are taking the safe approach to try and build him up as a star in the U.S by putting him in against poor opposition. It won’t work, but they’re going to try anyway. In Joshua’s case, he’s wasting his time talking about Fury, because the U.S fans don’t know who he is. Joshua is speaking to a small select group of hardcore boxing in the U.S when he name drops Fury’s name, and you can argue that they’re not big fans of his. Fury is not even close to being popular in the U.S, and he probably never will.