Deontay Wilder on Dominic Breazeale: “His life is on the line for this fight” 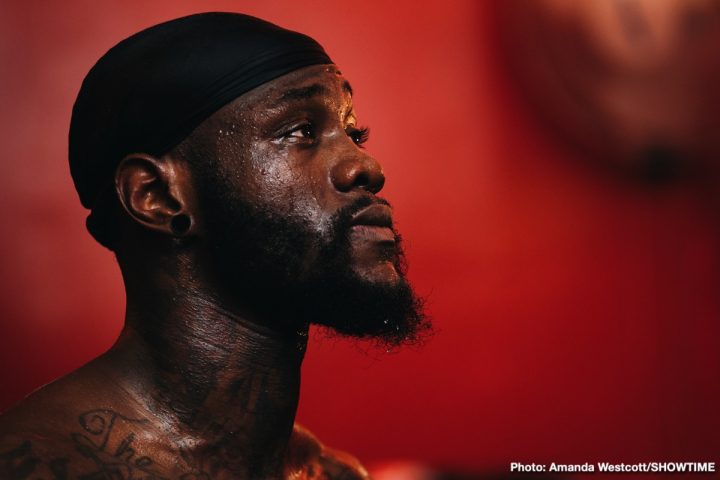 By Tim Royner: Deontay Wilder says his opponent mandatory challenger Dominic Breazeale will have his life on the line this Saturday night when he faces him on Showtime at the Barclays Center in Brooklyn, New York. The unbeaten Wilder (40-0-1, 39 KOs) will be defending his WBC heavyweight title, and looking to extend his time as the champion to nine defenses.

Wilder says he wants a “body” on his record, meaning a fighter that passes away inside the ring while fighting him. At least two of Wilder’s opponents [Sergey Liakhovich and Artur Szpilka] have looked in bad shape after he knocked them out, but thankfully he’s not been able to hurt any of them to the extent that they died while fighting him. Not surprisingly, Breazeale (20-1, 18 KOs) isn’t too overjoyed at hearing Wilder talk like this about their fight on Saturday night on Premier Boxing Champions on Showtime, but he’s returning fire by saying that he’s going to be the one scoring a knockout.

“His life is on the line for this fight. And I do mean his life. I’m still trying to get a body on my record. This is the only sport where you can kill a man and get paid for it at the same time. It’s legal. Why not use my right to do so?” Wilder said via Michael Benson.

The only challenger to escape being knocked out by Wilder during his four-year title run is Tyson Fury, who he fought to a 12 round draw last December in Los Angeles, California. For all intents and purposes, Wilder, 33, had Fury knocked out in the twelfth round after depositing him on the canvas as a one-two combination, but the referee Jack Reiss used an old school approach to the knockdown by giving a count. Fury had both eyes closed didn’t stir for four or five seconds. Many referees halt the fights on the spot when a fighter as badly hurt as Fury was, but the fight was allowed to continue after he got up off the canvas in just barely beating the 10 count. Wider maintains that Fury was given a long count by the referee. Fury looked badly hurt while he was on the canvas. It’s surprising that the referee chose to let the fight continue on the way he did. Fury hasn’t fought since. His new co-promoters at Top Rank decided they didn’t want to put him back in with Deontay right away. They found a weak-punching heavyweight in Tom Schwarz to match Fury against for a tune-up level fight on June 15 in Las Vegas, Nevada. You can bet that Top Rank will be monitoring Fury’s condition closely during the Schwarz fight to make sure there’s not signs of lingering problems from his vicious knockdown in the 12th round of his previous fight against Wilder.

Deontay Wilder on the Dominic Breazeale fight: “His life is on the line for this fight and I do mean his life.” Later adds “I’m still trying to get me a body on my record.” #WilderBreazeale pic.twitter.com/k7kg3xZpaV

Some fans unhappy with Wilder’s comments

There are a high number of angry boxing fans who are upset with Wilder talking about wanting to try and get a “body” to add to his record before he eventually walks away from the sport. The fans think it’s disgraceful for Wilder to talk in this manner. However, Wilder’s over the top remarks about Breazeale’s like being on the line for the fight has succeeded in drumming up interest in the fight that might not have been there. Although Breazeale fought for the U.S in the 2012 Olympics, the casual fans have never heard of him. He’s not popular. The hardcore fans in America knock Breazeale from his seventh round knockout loss to Anthony Joshua in 2016, and his wins over Fred Kassi, Amir Mansour, Carlos Negron, Eric Molina and Izuagbe Ugonoh. Those are Breazeale’s fights in the U.S that have attracted the most attention. He’s looked both good and bad in those matches.

It’s not big news that Wilder is predicting a knockout of the 6’7″ Breazeale. After all, Joshua already accomplished that fete in 2016, and the 6’5″ Ugonoh (18-1, 15 KOs) came close to knocking him out in their fight in February 2017. Ugonoh knocked Breazeale down hard in the fourth round, but he wasn’t able to keep him down. Breazeale got back up and stopped the exhausted Ugonoh in the fifth round. If Wilder stops Breazeale, he won’t get a massive amount of credit due to Joshua beating him by knockout three years ago in 2016. Joshua says he’s hoping that it takes Wilder longer to knockout Breazeale than what he did.

“Dominic Breazeale is going to get knocked out in dramatic fashion on Saturday,” Wilder said. “I can’t wait. He’s like a fly in my ear. I’m going to get him out of there in a fashion no one has ever seen.”

Wilder, 33, is playing his part as the villain to the hilt in talking about wanting to get rid of Breazeale. Wilder talking in bold terms will attract more attention from boxing fans worldwide than if he were to stay quiet. Obviously, it looks and sounds bad to have the WBC heavyweight champion Wilder talking about wanting to get a body on his record.

We’re likely going to see a highly motivated Breazeale on Saturday night when he gets inside the ring with Wilder. Whether that plays into Wilder’s hands or not is unknown. Breazeale would be better off boxing Wilder the way that Fury did if he wants to make it to the later rounds of the fight. The thing is, Wilder will still be dangerous in the championship rounds. He’s light for a heavyweight at 212 pounds, and it’s not difficult for him to move that weight around the ring compared to larger 250+ pound heavyweights like Breazeale. Wilder will likely be giving away over 40 pounds against Breazeale on Saturday night. Breazeale weighed 256 lbs. for his last fight against Carlos Negron on December 22, and he stopped him in the ninth round.

“Dominic Breazeale asked for this. I didn’t seek him out. He came for me,” Wilder said. This isn’t a gentleman’s sport. We have bad blood and it’ll be in the ring Saturday night.”

Breazeale is the WBC mandatory challenger. He chose to take the WBC route to fight Wilder obviously, because he’d already been knocked out by IBF/WBA/WBO champion Joshua in 2016. Breazeale at least has a shot at beating Wilder. The fans already saw that Breazeale was completely out of his league against Joshua. 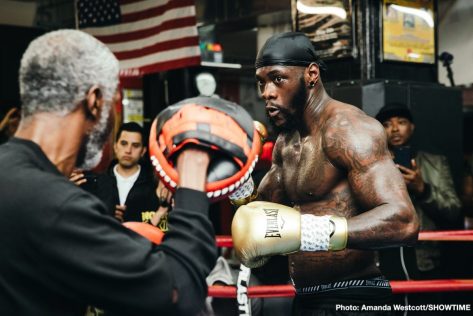 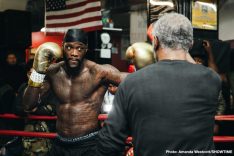 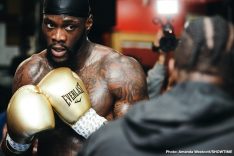 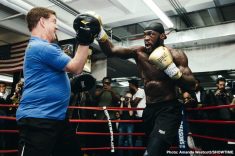 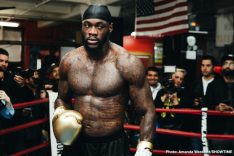 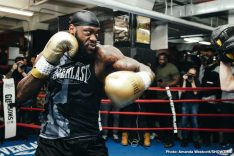 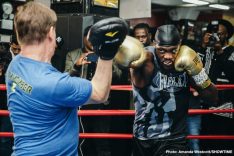 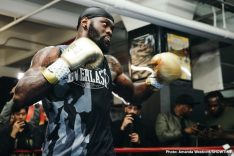 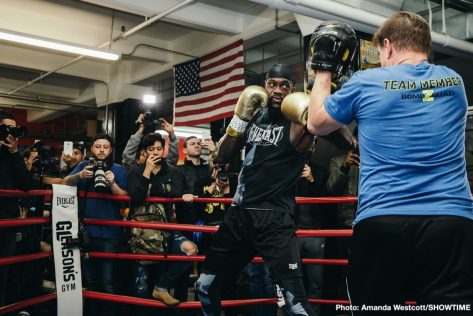 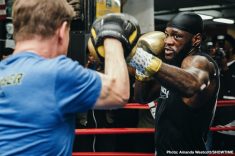 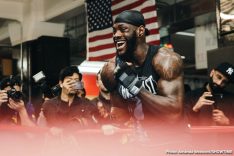 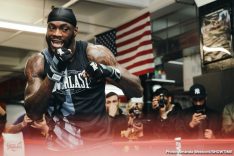 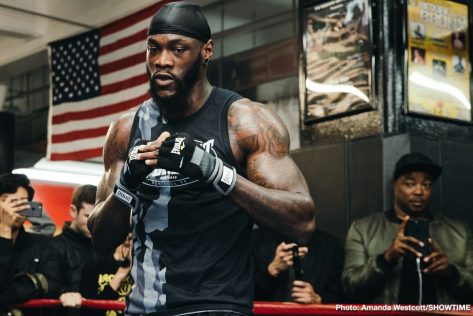 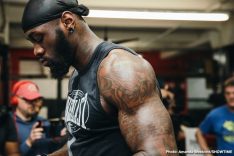 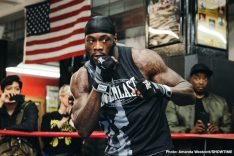 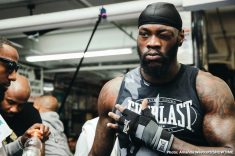 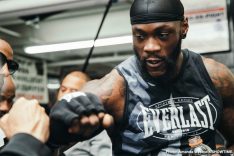 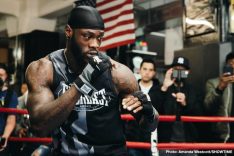 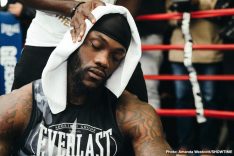 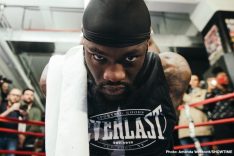 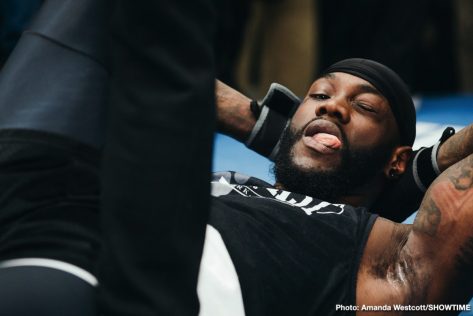