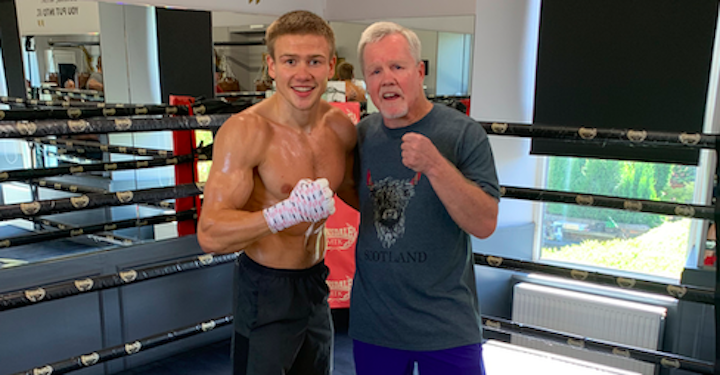 IBF Champion Ivan Baranchyk is motivated by fighting in Josh Taylor’s backyard in the WBSS super-lightweight semi-final on Saturday at The SSE Hydro in Glasgow, Scotland.

“I will win, one hundred percent,” said Baranchyk at Tuesday’s media workout ahead of this weekend’s World Boxing Super Series semi-finals. “Either I knock him out or I will put him down so many times that there is no doubt. Taylor has never run into a beast like me. This is going to be a new experience for him, something he’s never seen before. Let’s see how he handles it. I know how I will handle it.”

“I have a lot of respect for Josh Taylor,” ‘The Beast’ added. “I think this will be my toughest fight yet because both me and Josh are very tough fighters, really strong. But for me, it’s always better to knock the opponent out. Saturday night, there will be no need for the judges.”

The Belarusian residing in Miami, Oklahoma, said says he feels comfortable on foreign soil and he sees an opportunity to conquer new territory away from home in his first bout outside Belarus and the United States.

“I am not used to being the bad guy,” he said. “In the States, I have a big following, a big crowd. So this is the first time I’m really going to be the outsider, coming to a hostile environment. But I don’t mind coming to Glasgow for my first defence. It’s not tough for me. I’m comfortable, I’m excited and there is no problem with being here.”

“I’ve never fought in an arena where everybody wants me to lose! But I love that. It motivates me. I might not be popular, or famous here in Scotland. But I want to be famous here. I want the Scots to become my fans, and to have fans all over the world.”

And Baranchyk’s trainer Freddie Roach told has the plan to make it happen.

“I came up with a very good game plan and we are going for the knockout,” he said. “I have watched Taylor every night and day, and I am looking for the bad habits and there is quite a few.”

Josh Taylor, however, told it is written he will take Baranchyk’s IBF title.

“I am ready to become world champion on Saturday,” said Taylor. “This is my dream. I have dreamed about this for so long and for years I’ve wrote on bits of paper – ‘Josh Taylor, World Champion.’

“I am really excited and happy that the big shot is almost here. I am delighted to be doing Scotland proud.”

Ivan Baranchyk promises to beat up Josh Taylor in Glasgow

IBF World champion Ivan Baranchyk (19-0, 12 KOs) has landed in Glasgow with a strong message to WBC Silver champ Josh Taylor (14-0, 12 KOs) ahead of their WBSS super-lightweight semi-final May 18 at The SSE Hydro in Glasgow, Scotland.

The ‘Beast’ is unleashed in Scotland’s largest city, and the Belarusian strongly believes he will be the one to put a stain on the opponent’s record in a battle of unbeatens.

“I am very confident of winning,” said Baranchyk. “I am going to beat Taylor by beating him again and again and then beating him some more!”

Baranchyk made his way into the semi-final stages of the quest for the Ali Trophy when he halted Sweden’s Anthony Yigit in seven rounds to claim the vacant IBF 140lb title. And he vows the same treatment of Scotland’s ‘Tartan Tornado’ to proceed to the final.

“I know that Taylor is a talented fighter and that the fight is in his backyard, but I am looking forward to putting on a spectacular performance and defending my title. The boxing fans in Glasgow can expect me to beat up their hero!”

Baranchyk told he has been working on his defense and movement since the Yigit fight, and that he recently split with trainer Pedro Diaz to work with another renowned tutor, Freddie Roach out of the famed Wild Card Gym.

“Boxing is life for me and I work hard every day. I am always working,” said ‘The Beast’.

The hard-hitting 26-year-old pictures himself with the Ali Trophy, but the focus is on the task in Glasgow.

“Who can beat me?” he said and answered the question himself: “I will do what I need to do to get that trophy. But, for now, all of my attention is on defeating Taylor on May 18.”

For a year the Miami-based Belarusian has trained under the wings of one of the most decorated coaches in recent history. Pedro Diaz was impressively part of the coaching staff for five Olympic Games – four with Cuba and one with the Dominican Republic – before moving to the professional ranks where he has worked with several world champions.

When ‘The Beast’ Baranchyk advanced to the semi-final and took home the vacant IBF title, he showed his devastating power against Sweden’s Anthony Yigit and forced the ring doctor’s stoppage in the seventh round in New Orleans, USA. And Taylor impressed in his quarter-final and utterly dominated the bout and stopped USA’S Ryan Martin in the seventh round to pave the way for a sensational match-up between ‘The Tornado’ and ‘The Beast’.

Pedro, how were the preparation for May 18 vs Taylor?

“The preparations were really excellent. Baranchyk is a very dedicated athlete and he is going through a very good camp with good sparring partners. Baranchyk loves what he does. He is never late, he never misses a training, he never parties. He always gives 100% in training and he wants to train harder and is constantly pushing himself. Some boxers are tired when the weekend comes, but not Baranchyk, he is unstoppable. His only focus is his training and his future.”

What do you think of Taylor as a boxer?

“Taylor is a great boxer, he is one of the best in the division, and he has a good team around him, but we are very confident and people will see why he is called ‘The Beast’.”

Why do you think Baranchyk has the upper hand to defend his title and go to the Ali Trophy final?

“We feel confident because of the dedication we see in the training. Baranchyk feels comfortable. We have different strategies, so there is always a plan b. What we can say is that we are not going for the KO, we always aim to win all 12 rounds, and we know Baranchyk can keep every round a very high pace.”

Do you think he will go all the way and take home the trophy?

“Like I said, we feel very confident because of what we see every day in the gym. He is a true warrior and has everything to become a superstar.”

Tickets for the hotly-anticipated semi-finals will soon go on sale. Fans are encouraged to sign-up for Ticket Alerts to receive an email reminder when tickets can be purchased.

Fans in the U.S. and Canada can watch the Ali Trophy semi-finals LIVE, exclusively on DAZN