Demetrius Andrade vs Maciej Sulecki on June 29 in Rhode Island 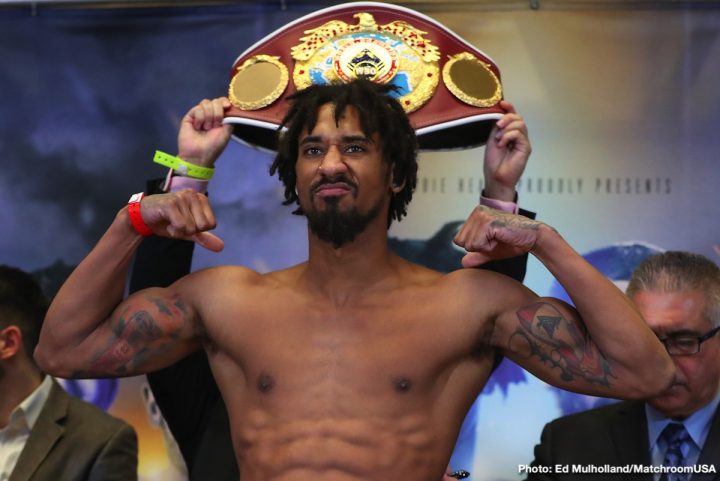 Demetrius Andrade will defend his WBO World Middleweight title against Maciej Sulecki on Saturday June 29 at the Dunkin Donuts Center in Rhode Island, Providence live on DAZN in the US and on Sky Sports in the UK.

Andrade (27-0 17 KOs) defends his title for the second time in his first ever hometown show having seen off the challenge of Artur Akavov with a final round stoppage in New York in January, having become a two-weight World ruler in October in Boston, landing the vacant strap with a wide points win over rugged South African Walter Kautondokwa.

Sulecki (28-1 11 KOs) enters the bout on the back of a thrilling encounter with Gabriel Rosado in Philadelphia in March, edging out the local favorite in a back-and-forth classic for the WBO International title. The Pole, ranked number three with the WBO, fights for a World title for the first time in his career, but has already served notice of his threat level having taken IBF king Daniel Jacobs the distance when they met in April 2018.

Andrade announced the fight at the T-Mobile Arena in Las Vegas as Jacobs and Canelo Alvarez meet in a unification blockbuster live on DAZN – and the 31 year old knows that dispatching Sulecki on his home turf is the last obstacle for an undisputed fight against tonight’s winner.

“After tonight, there will be one guy with three of the belts, and I’ve got the fourth,” said Andrade. “Both guys (Alvarez and Jacobs) have been very vocal about wanting to unify after this fight, so let’s make it happen.

“We all feel that we are the best in the division, and there is only one way to find that out. I wish both Canelo and Danny well tonight, but they better know I’m there watching with a purpose.

“Sulecki is one of the top guys in the division, and his only loss is to Danny, in a fight where he gave Danny problems. You can’t overlook this guy. He has earned this shot, and I am expecting him to bring it. That being said, I am the best 160-pounder in the sport, and I plan on showing every single aspect of that come June 29. This is my time.”

“Last Thursday I turned 30, so to fight for a World title is the best birthday gift for me,” said Sulecki. “I am in the most important moment of my career. I believe I can win and all the best is ahead of me. I think next five years can be the best in my boxing life so I must grasp it.”

“Demetrius is in the most golden position ever,” said promoter Eddie Hearn. “You are the final piece of the jigsaw puzzle for the undisputed title. So just keep winning. Sulecki will give him a chance to look good, in my opinion. He needs a fighter that comes to fight.

“Hopefully, we can fill up the Dunkin Donuts Center and make it a big deal, and he can start getting some credibility and profile and say, ‘I’m not just a B-side. I’m the link to the undisputed title.’”

Tickets for the homecoming WBO World Middleweight title defense of Demetrius Andrade are on presale NOW as he puts his belt on the line against Maciej Sulecki at the Dunkin’ Donuts Center in Providence, Rhode Island on Saturday June 29, live on DAZN in the US and on Sky Sports in the UK.

Andrade (27-0 17 KOs) makes the second defense of his crown in his first ever fight in his Providence backyard, with the two-weight World king landing the belt in Boston with an emphatic points win over Walter Kautondokwa in October and then stopping Artur Akavov in the final round of their January clash in New York.

The former WBO Junior-Middleweight ruler holds a powerful position in the star-studded 160lbs division as one of two World champions after Canelo Alvarez defeated Daniel Jacobs to add his IBF crown to the WBA and WBC belts he owns – meaning ‘Boo Boo’ is hunting an undisputed fight with the Mexican superstar.

Sulecki (28-1 11 KOs) will want to gatecrash those plans and the all-action Pole promises to deliver a war on June 29. The 30 year old challenger comes into the bout on the back of a thrilling clash with Gabriel Rosado in March, pocketing the WBO International belt after flooring the hometown favorite in the second and eighth rounds but then hitting the deck twice himself in the ninth.

The pair will come face-to-face at a press conference at the Dunkin’ Donuts Center next Wednesday and fans can get their hands on tickets NOW – with tickets starting at just $28 (including fees).

Fans can visit: ticketmaster.com/ and enter the code MBUSA to access presale tickets.

Tickets go on general sale at 10am on Wednesday May 22.