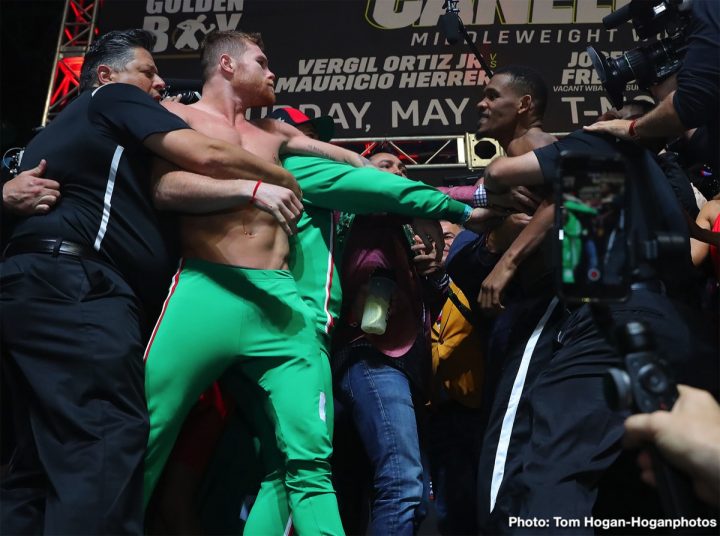 By Sean Jones: Saul Canelo Alvarez and Daniel Jacobs both weighed in earlier Saturday morning at 8:00 a.m., as per the contract for their unification match, but surprisingly neither of them disclosed what their weight was. The contract rehydration clause limited both fighters to 170 pounds. Anything about that weight would have resulted in a stiff $100,000 per pound penalty.

The fact that both fighters have failed to disclose their weight has led some boxing fans to believe that a secret deal was made between Canelo’s promoters at Golden Boy and Jacobs’ promoter Eddie Hearn to cancel the requirement. It would make sense for Golden Boy to have canceled it more so than Team Jacobs, because Canelo looked emaciated at the weigh-in last Friday, and one could tell that he would be the guy that would be hurt more by being prevented to rehydrate fully overnight. Golden Boy Promotions might not have realized that the rehydration clause that they put in the contract, which was them trying to help their fighter, might backfire on him instead.

”It’s #boxing so there’s always funny business. Both sides refuse to disclose either man’s weight at the Saturday morning #CaneloJacobs weight check. Both were required to be 170 or less at 8 am PT or face financial penalties. They both weighed, the fight is on but no weights,” said Dan Rafael of ESPN.

Last Friday night, Golden Boy Promotions CEO Oscar De La Hoya denied putting the rehydration clause in the contract for the Canelo vs. Jacobs fight. De La Hoya said it was the IBF’s ruling, and that was standard for their fights. However Jacobs says that the IBF only has the 10 lb. rehydration rule for regular title defenses for their champions, but not for unification fights. Tonight’s Canelo-Jacobs match is a unification match. Canelo will have his WBA/WBC middleweight strap up for grabs, while Jacobs will be putting up his International Boxing Federation belt.

A lot of fans might not be aware that there was a 10 lb. weight clause restriction for Canelo’s last fight against WBA World super middleweight champion Rocky Fielding on December 15 last year at Madison Square Garden in New York. Neither fighter could be over 178 pounds after rehydrating overnight after making weight on the Friday before the fight. Given that Fielding is 6’1”, and a full super middleweight, it obviously hurt him to have to keep his weight within 178 lbs.

Today’s secondary weigh-in for the Canelo vs. Jacobs fight was a continuation for the weight restrictions that we’ve seen from Alvarez’s side.

These are the following fights where Canelo fought his opponents at catch-weights in the past six years:

The problem with the rehydration clause is that it prevents Canelo from getting full credit if he wins tonight. Canelo may not realize it but he’s not going to get credit from knowledgeable boxing fans for beating Jacobs if they suspect that he wasn’t 100% due to him being weakened by the 170 lb rehydration clause.

When Canelo was fighting on HBO, his rehydrated fight night weight wasn’t disclosed by the network commentators. His opponent’s weight was revealed, but not his. This led to a lot of speculation that Canelo was rehydrating a massive amount of weight and would come into the ring much heavier looking than some of his opponents. Canelo looked huge compared to his opponents when he fought the likes of Amir Khan, Gennady Golovkin and Alfredo Angulo.

If Both Canelo and Jacobs weighed in over the 170 lb. weight limit this morning, then it’s fine as long as the two sides had a confidentiality agreement.

Today’s secondary weight check wasn’t going to change anything. Since it wasn’t required by the IBF, WBA and WBC, neither fighter would have lost their title if they had come in heavier than 170 lbs. Moreover, with Canelo’s purse for the fight being $35 million and Jacobs’ purse being $12.5 million, they could well afford paying $100,000 to $500,000 extra if they came in over the 170 lb. weight limit. Jacobs said he was going to be no higher than 174 pounds for the fight. That’s not a lot of extra money that he or his trainer Hearn would have had to pay out if he chose to rehydrate fully overnight rather than waiting until after the secondary weigh-in.

It makes more sense for Jacobs to have blown off keeping his weight within the 170 lb rehydration limit, because he’s the bigger guy and he’s the B-side fighter and will be at full strength tonight without being handicapped by the strength draining secondary weigh-in. It’s believed that Jacobs MUST not only beat Canelo, but dominate him in such a fashion that the judges can’t take away his victory from him like they arguably did to Gennady Golovkin in his two fights with Alvarez at the T-Mobile Arena in Las Vegas, Nevada. Jacobs could have complied by the weight rules, but then found himself so weak that he wouldn’t do well. Often when fighters are weight drained, it shows itself in the second half of the fight, which is when Jacob’s needs to be at his best. Canelo tends to gas out after six rounds, and that’s when Jacobs would be able to turn it up to snatch the victory. But if he was hurt by the weight restrictions for the secondary weigh-in, then he might not be able to come on in the later rounds to dominate the tired out Canelo.

Hopefully the weight clauses don’t continue to be a part of Canelo’s fights marching into the future. It’s kind of pathetic after awhile for Canelo to continue to use them. He’s also 30 now. When does it stop? Will he use rehydration clauses to try and game the system to extend his career into his 40s? At some point you’ve got to be able to win without the use of gimmicks to tilt the scales to your side.