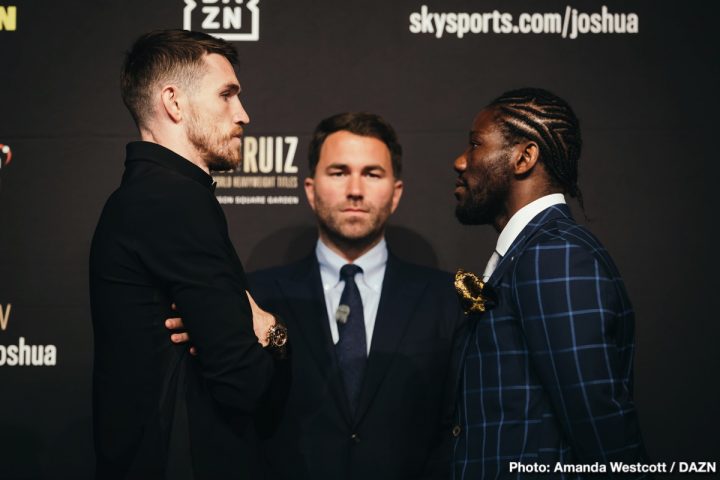 By Charles Brun: Callum Smith wants to do a job on his much smaller challenger Hassan N’Dam this Saturday night to ensure that he keeps alive his hopes of a big money fight against Saul Canelo Alvarez. Smith (25-0, 18 KOs) is defending his WBA Super World super middleweight title against the 35-year-old former WBA 160-pound champion N’Dam (37-3, 21 KOs), who has been picked out from the middleweight division specifically for this fight. Smith’s promoter wants Smith to win and look good.

Smith vs. N’Dam is the co-feature bout on the undercard of the heavyweight fight between IBF/WBA/WBO champion Anthony Joshua vs. Andy Ruiz Jr. on DAZN and Sky Box Office at Madison Square Garden in New York. The fight card will start streaming on DAZN at 9:00 p.m. ET/6:00 p.m. PT this Saturday night on June 1.

Smith wants Canelo to be his next opponent after he faces N’Dam on Saturday. That’s one of the reasons why Smith is hoping to get an impressive victory over N’Dam, so that he can make some noise in the U.S to get the boxing fans talking about him so that Golden Boy Promotions will make the fight between him and Canelo. There is a chance that Callum could get the fight with Canelo if former middleweight champion Gennady Golovkin suffers an injury or is beaten in his June 8th fight against unbeaten Steve Rolls (19-0, 10 KOs) on DAZN at Madison Square Garden in New York.

GGG doesn’t figure to lose to the 35-year-old Rolls, because he’s a fighter that has been well vetted, and he’s not someone that has shown the kind of talent that would give Golovkin any kid of problems. Even if Golovkin does beat Rolls, there’s a chance that he might not get the fight with Canelo if he asks for a bigger purse split than what Golden Boy is willing to give him.

Canelo vs. Smith an easy fight to make

Callum will likely come in at a much nicer price than Golovkin for a match against Canelo. The only downside of Canelo fighting Callum is the casual boxing fans in the U.S won’t know who he is, and won’t be as interested in subscribing to DAZN to see the fight. There wasn’t much interest from American fans in Canelo’s fight with Rocky Fielding last December. It would be worse if Canelo fights Callum, because the fans would need to subscribe to DAZN to see the match.

Canelo and his promoters at Golden Boy Promotions haven’t revealed who he’ll be fighting next in September. In his last fight, WBA/WBC middleweight champion Alvarez (52-1-2, 35 KOs) defeated IBF 160-pound champion Daniel Jacobs in a unification fight on May 4. The options for Canelo’s next fight in September are these three fighters: Gennady Golovkin, Callum Smith and Demetrius Anrdrade.

With the win over Jacobs, Canelo now holds three of the four belts at middleweight, including the WBA ‘regular’ super middleweight belt that he won in beating Rocky Fielding by a third round knockout last December at Madison Square Garden in New York. Canelo has talked about fighting more at super middleweight, and moving up to light heavyweight to challenge WBO 175-pound champion Sergey Kovalev. Given the 35-year-old Kovalev’s age and his hot and cold performances in the last three years, Canelo is going to need to move up as soon as possible to face the Russian fighter before he gets beaten again, because he’s already lost three times since 2016.

Callum’s chances of getting Canelo fight not good

Smith has only a slim chance of getting the fight with Canelo next September. There’s too much interest in a third fight between Canelo and former middleweight champion Gennady Golovkin. The 28-year-old Smith is a potential option for Canelo in the future, but not now. Canelo wants to finish unifying the middleweight division before he looks to move up in weight to guys at 168.

“The fact is, with Canelo, is that if I slip up on Saturday night, that fight doesn’t happen,” Smith said to ESPN.com. “That’s gone. So that’s what keeps me motivated, that I have to come here this Saturday and win to keep those massive fights alive. I’m fully focused on June 1. I’m in a very good place and I had a great training camp,” said Smith.

It’s not exactly a good sign that Smith is worrying about losing to a fighter in N’Dam’s class, because this is a guy that has been beaten in the past by Ryota Murata, David Lemieux and Peter Quillin. If Callum can’t beat the 35-year-old N’Dam, then he has no business being a world champion at 168, and he certainly doesn’t deserve a fight against Canelo Alvarez. The reality is, Smith doesn’t have a good name on his resume other than George Groves,” who he beat last September by a seventh round knockout win in the World boxing Super Series 168-pound final.

The victory for Callum looks good on paper, but not when realize that Groves was fighting with just one good arm. His left shoulder wasn’t the same after he had surgery on it. Groves was basically fighting Smith with just his right arm, and doing a pretty good job of it under the circumstances. There are a lot of fans that believe that Smith would have lost to Groves before he suffered a shoulder injury against Chris Eubank Jr. in the semifinal of the WBSS last year in February. This Saturday night on June 1, Smith will be making his first defense of the WBA belt he won off of Groves.

Smith’s promoter Eddie Hearn isn’t saying why Callum is being matched against N’Dam (37-3, 21 KOs) instead of a contender from the 168-pound weight, but it’s likely that he chose him, because the Cameroon fighter is known to the hardcore boxing fans in the U.S, who know of hi from seeing him lose to David Lemieux, Peter Quillin and Ryota Murata. Those are the three notable fights that N’Dam has been involved with that were seen by American boxing fans. Hearn might not realize that the American boxing fans only know of N’Dam from his losing efforts, and his controversial decision win over Murata in their first fight in May of 2017.

Smith has a lot of pressure on him

Smith is right about him needing to focus his attention on N’Dam, because if he takes his eyes of the prize, he’ll get beaten. N’Dam was recently beaten by Ryota Murata by a seventh round stoppage in October 2017. N’Dam came back from that loss to defeat former four time world title challenger Martin Murray last December by a 12 round majority decision.

Golovkin (38-1-1, 34 KOs) has to do his part against Steve Rolls on June 8th for him to have a chance of fighting Canelo next September. Canelo likely will want to fight GGG again if that’s the fight that the fans want to see him in. Golovkin just needs to beat Rolls, and look good in doing so to get the victory.

The 37-year-old Triple G recently signed a lucrative six-fight, nine-figure deal with DAZN. Golovkin’s first fight against Rolls is essentially a throwaway fight in which DAZN allowed the Kazakhstan fighter to take an easy opponent for him to get a tune-up due to him coming off of a loss to Canelo last September, and a nine month layoff. However, DAZN is going to get quality opponents from both Canelo and GGG in the future.

They’re not going to let Golovkin and Canelo fight bottom feeders or paper champions that don’t resonate with the fans. If Golovkin loses to Rolls, then Callum Smith will be in a great position to get the fight with Canelo in September. Smith’s promoter Eddie Hearn is quite excited at the prospects of him getting a fight against Canelo. That might be one of the reasons why Hearn matched Smith against N’Dam instead of a fighter from the super middleweight that could potentially give Callum problems.

Callum will still a terrible choice for Canelo to fight even if GGG loses to Rolls. Canelo would still be better off picking a well known American like Demetrius Andrade, or fighters from the super middleweight division like David Benavidez or Caleb Plant. Smith is with Hearn, and fights now on DAZN. As such, it’ll be easy for Hearn to match Callum against Canelo, who also fights on DAZN.

Smith has talked of wanting to move up to 175-pound division in the near future, but he’s not ready to make that move yet. That would be a really risky move on Callum’s part, because he would suddenly find himself mixing it up with the likes of Oleksandr Gvozdyk, Artur Beterbiev, Sergey Kovalev and Dmitry Bivol. Smith wouldn’t match up well against any of those fighters. If Smith does move up to 175, he might find his stay in that weight division short, painful and filled with failure. The 6’3″ Smith is better off staying at 168 where he has a size advantage over most of his opposition. You take away that size advantage for Smith by putting him in the 175-pound weight class, then all of a sudden he’s not doing so well.

“Hassan is a good fighter, very experienced, a former World Champion himself and only the better fighters have beat him,” Smith said. “I believe I am the best Super-Middleweight in the world and if that’s true I should beat Hassan, and beat him well, looking good doing it.”


« Joe Joyce vs. Bryant Jennings on July 13 in London, UK