Breazeale says Deontay Wilder might retire after he beats him 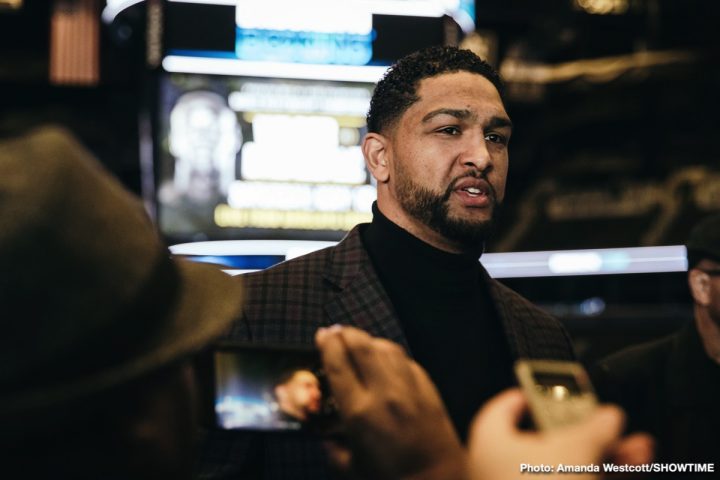 By Mike Smith: Deontay Wilder’s career could come to a screeching halt next Saturday night on May 18th if he loses to mandatory Dominic Breazeale in their fight on Premier Boxing Champions LIVE on Showtime at the Barclays Center, in Brooklyn, New York. Although Wilder (40-0-1, 39 KOs) is the favorite to win, the 6’7” Breazeale (21-1, 18 KOs) believes he’s got the punching power and the talent to defeat the 33-year-old Wilder on Saturday.

Breazeale thinks the 2008 U.S Olympic bronze medalist Wilder will react negatively to a loss to him, and wind up retiring from the sport rather than continuing on to try and rebuild his pro career. Wilder hasn’t lost a fight in 11 years since getting beaten in the semifinal of the 2008 Olympics by Italian fighter Clemente Russo by a 7-1 score. That was a long time ago, and it’s difficult to predict what Wilder’s reaction will be as a pro to a loss. As an amateur, Wilder took the loss to Russo well, and decided to turn pro. There was no reason for him to continue to fight in the amateur ranks, as he would have had to wait another four years for the next Olympics in 2012. It wasn’t worth if for Wilder to stick around the amateurs.

“Nobody no longer wants to see Deontay Wilder as WBC heavyweight champion,” Breazeale said to skysports.com. “I think he finds it humbling and I think it ends his career, it retires him. A guy like Wilder, the surrounding that he has, he’s not used to being down in the dumps and being a depressed individual. I think it cripples him, it sends him into some type of a depression and he never comes back to fight again.”

Breazeale is incorrect about his opinion that “nobody wants to see Deontay Wilder a WBC heavyweight champion.” That’s simply not true. IBF/WBA/WBO heavyweight champion Anthony Joshua, former unified champion Tyson Fury, Luis Ortiz, Adam Kownacki and Dillian Whyte all wish to face Wilder. Even if the 6’7” Wilder wasn’t the World Boxing Council heavyweight champion, those fighters would likely still wish to face him. Wilder is too well known at this point in his career for the top guys in the division not to want to fight him.

Will a KO loss to Breazeale send Wilder into retirement?

Wilder hasn’t been knocked out since he was in the amateurs by Russian fighter Evgeny Romanov, who stopped him in the third round in a Russian vs. United States dual meet in 2008. The much shorter Romanov, 6’0”, was able to get inside on Wilder, and hurt him with right hands, and eventually knock him down. The referee had to stop the fight because Romanov had Wilder wobbling around the ring. Romanov, 33, is now a pro and has won his first 12 fights without a loss with nine knockouts. It’ll be interesting to see if Romanov amounts to anything at the pro level. Romanov has good punching power, but he’s small at 6’0” 223 lbs, and it might not be the same situation for him now that he’s older and not using headgear in the amateurs..

As far as Wilder quitting, he didn’t quit after Romanov stopped him in 11 years ago, and it’s unlikely that he’ll hang up his gloves if he gets beaten by Breazeale. There’s too much money for Wilder to make by continuing his career.

Breazeale says Wilder lacks fundamental skills as a heavyweight, and he hasn’t improved his game since he turned pro in 2008. He’s still the same fighter he was was back then. Breazeale states that the only thing that Wilder brings to the table in his fights is his big right hand, but that’s nothing special. Breazeale points out that all the heavyweights have punching power that can get you out of there, and he believes he’s stronger than Wilder.

”I’m the more skilled, more athletic and bigger, stronger guy,” Breazeale said. ”I don’t see any fundamental skills. He’s been champion for about four years. He hasn’t grown. He hasn’t changed. Yes, he’s got a big right-hand but don’t we all in the heavyweight division? We all have knockout power.”

Wilder looked highly skilled in defeating Luis Ortiz, Bermane Stiverne, and pulling out a 12 round draw against Tyson Fury. Wilder would have lost those fights if he didn’t possess talent. It’s understandable why Breazeale would minimize Wilder’s ability so close to the fight. Any edge Breazeale can get could help him get the win, especially if he can plant a seed of doubt into the mind of Wilder by telling the media what a poor fighter he thinks he is. The problem is it’s not likely to work. Wilder is one of those type of fighters that has massive self confidence going for him, and he doesn’t mind boxing fans and the media doubting him. Wilder isn’t going to be afraid to throw punches on Saturday night because Breazeale, the fans are the media believe him to be a technically poor heavyweight. With a record of 40-0-1, Wilder has been doing something right. He can’t be as bad as Breazeale thinks he is if he’s still undefeated. It would be a mistake on Breazeale’s part to write off Wilder’s chances of winning the fight based on his technical skills or lack thereof. There’s obviously better skilled fighters in the heavyweight division today, but they don’t possess Wilder’s 6’7″ height, reach or right hand power. Tyson Fury has excellent skills, but he couldn’t stay on his feet when Wilder started landing his right hand bombs late in their fight last December.

Dominic wants to win in style to impress the fans worldwide with a knockout victory over Wilder. If Breazeale can score a knockout of Wilder, he would be making it clear to everyone that he’s the better fighter of the two. Breazeale wants there to be no doubt in the minds of anyone who the better fighter is of the two. The best way for Breazeale to accomplish that goal is to knockout Wilder on Saturday night when they square off at the Barclays Center in Brooklyn.

To get the knockout, Breazeale is going to need to put himself in harm’s way in the same manner that the hard hitting Evgeny Romanov stopped Wilder in 2008. Romanov took some big shots from Wilder in that fight in order to deliver his own powerful punches. Breazeale will need to be willing to take some of Wilder’s right hands for him to connect with his own powerful power shots.