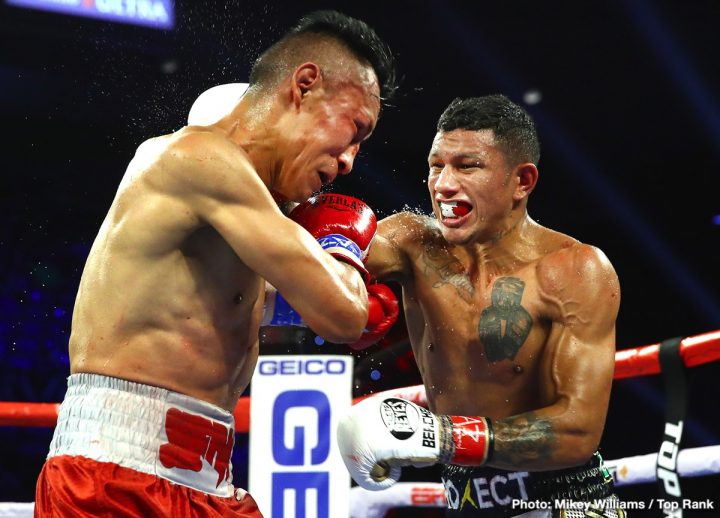 By Jeff Aranow: WBC super featherweight champion Miguel Berchelt took apart Francisco Vargas in stopping him in the sixth round last Saturday night in their rematch on ESPN, and now he’s looking to face winner of the May 25th fight between WBO 130-pound champion Masayuki Ito (25-1-1, 13 KOs) and Jamel Herring (19-2, 10 KOs).

Berchelt, 27, wants to unify the super featherweight division if possible. It might not be a doable goal for Berchelt, but he can at least look to face the winner of the Ito vs. Herring fight.

Berchelt 36-1, 32 KOs) defeated the 34-year-old former World Boxing Council super featherweight champion Vargas (25-2-2, 18 KOs) for the second time in the last two years last Saturday in forcing a stoppage after the sixth round at the Tucson Arena in Tucson, Arizona. Berchelt was landing too many shots for Vargas’ trainer to allow his fighter to continue into the sixth round. Vargas bravely stayed in there trying hard round after round to score a knockout, but it wasn’t any use. Berchelt’s combination punching was too much for him.

Vargas was landing a lot of beautiful shots that would have caused most super featherweights problems, but not Berchelt. He took Vargas’ best punches and answered back with his blistering combinations, and basically wore him down until his corner was forced to throw in the towel at 3:00 of round six. That’s when referee Jay Nady stopped the fight

Vargas gave no indication whether he’ll be retiring or not. He just said he would speak to his team to decide which direction to go in. 34 is old for a super featherweight, but Vargas can still punch. He might have stood a better chance if he’d gone after WBA ‘regular’ super featherweight champion Andrew Cancio, IBF champion Tevin Farmer or WBO belt hold Ito. Those are all guys that Vargas would have stood a much better chance of beating than facing Berchelt again. But with Vargas being with the same promoter as Berchelt, Top Rank Boxing, it made the fight with him an easy one to put together, even though it wasn’t a good career move to take the rematch.

“I am going to speak with my team, and we’ll see what happens in the future,” Vargas said.

If Top Rank can’t match Vargas against any of those champions, then he needs to think about moving down in weight, up in weight or possibly retiring. There’s no point in Vargas fighting Berchelt for a third time. The boxing public doesn’t want to see Berchelt and Vargas fight each other again. It was pointless to put the two back in with each other last Saturday night. They partially rebuilt Vargas by having him fight a couple of soft touches after his first loss to Berchelt in 2017 by putting him in with Rod Salka and Stephen Smith before matching him against Berchelt for a payday fight last Saturday, but it didn’t help Vargas’ career to take that fight again. It would have been better for Vargas if he’d been matched against one of the other champions at 130 rather than having burn up two years of his career fighting Berchelt twice, Salka and Smith.

“I want to prove that I’m the best 130-pounder in the world. In ]two weeks], it will be Jamel Herring taking on [WBO champion Masayuki] Ito. I want the winner of that fight because I don’t want to leave any doubt as to who the best super featherweight in the world is,” Berchelt said.

Berchelt won’t prove that he’s the best super featherweight in the world by beating the winner of Ito vs. Herring. Those aren’t talented fighters. Berchelt will show that he’s better than a couple of flawed fighters that have already been beaten before. Ito lost to Rikki Naito (21-2, 7 KOs) by a 10 round majority decision in February 2015. Naito is hardly a world beater. For his part, 2012 U.S Olympian Herring has recent losses to Ladarius Miller (19-1, 6 KOs) in 2017 and Denis Shafikov (40-4-2, 20 KOs) in 2016. The guy that Berchelt must fight to prove that he’s the best fighter in the super featherweight division is WBA Super World champion Gervonta ‘Tank’ Davis, and that’s someone that Top Rank likely won’t be able to match him up with anytime soon. Davis is with Mayweather Promotions, and they’re not going to put the young 24-year-old in with anyone advanced for at least two or three more years.

The good news is the 27-year-old Berchelt is young enough to wait on an eventual fight against Davis in the distant future. However, that doesn’t mean that Berchelt will get the fight with him. If Mayweather Promotions decide they don’t want to do business with Top Rank, then there won’t be a fight between Davis and Berchelt at any point in the future. It’s unclear how much longer Berchelt will want to stay at 130. If he moves up in weight to lightweight, then he’ll no longer have a chance to fight Davis unless he moves up too.

WBC super bantamweight champion Emanuel Navarrete (27-1, 23 KOs) defeated former World Boxing Organization champion Isaac Dogboe (20-2, 14 KO) for the second time in five months in stopping him in the 12th round. Dogboe revealed after the fight that he plans on moving up to featherweight, and that he would like to face Navarrete for a third time in that weight class if he’s interested in moving up.

Navarrete hasn’t said anything about wanting to move up to 126, but if he does, he likely won’t be looking to fight the 24-year-old Dogboe again. There’s no audience there for a third fight between them. It’s forlorn at this point for Navarrete and Dogboe to be fighting again. The boxing public needs to see these two fighters face other guys, because it’s patently obvious that Dogboe is just too small and too weak to handle the size and power of Navarrete.

Dogboe’s father threw in the towel in the 12th round when Navarrete was hitting him at will.

“It’s not over until the final bell. Hats off to Navarrete. He did a great job,” Dogboe said. “Making super bantamweight is getting too difficult. My next fight, I will be moving up to {126}. I will be much more comfortable there,” Dogboe said.


« Breazeale says Deontay Wilder might retire after he beats him