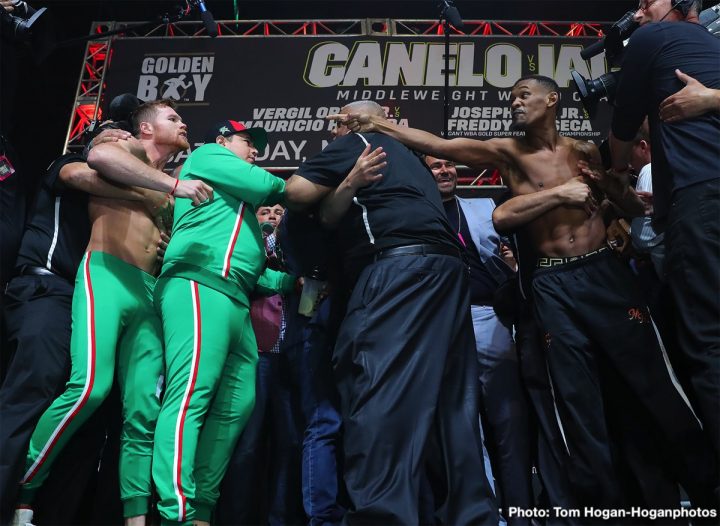 By Sean Jones: Chris Algieri is expecting a competitive fight between IBF middleweight champion Daniel Jacobs and WBA/WBC champion Saul Canelo Alvarez (51-1-2, 35 KOs) this Saturday night in Las Vegas, Nevada. Algieri is predicting that Jacobs is going to catch Canelo with one of his big power shots, and hurt him early in the fight.

Algieri states that if the 5’11 1/2″ Jacobs (35-2, 29 KOs) hurts Canelo with something, he’s going to look to finish him off to keep the judges from having a say in the final outcome on Saturday night

Algieri told Jacobs that he can the fight by a decision as long as he goes out there and does what he’s supposed to in each and every round of the fight. He doesn’t think the judges will take it away from Jacobs if he makes it conclusive.

IBF middleweight champion Jacobs and WBA/WBC champion Canelo (51-1-2, 35 KOs) will be fighting it out in a unification fight at the T-Mobile Arena in Las Vegas, Nevada.

“He’s not a big one punch power guys. He’s more of a combination puncher,” former WBO light welterweight champion Algieri said to Fighthub about Canelo. “He’s a good counter puncher. He’s got fast hands, and great defense. I think he gets guys out of there more from breaking them down, countering them, hurting the with shots they don’t see,” Algieri said about Alvarez.

It’s going to be interesting to see if Canelo can land a lot of shots on Jacobs to break him down to try and stop him. Canelo was able to knockout his last opponent Rocky Fielding in the third round, but that’s a fighter that isn’t known for having great punch resistance. Before Canelo fought him, Fielding was knocked out in the first round by Callum Smith. Canelo usually gets his knockouts later in his fights unless he’s facing someone smaller than him or with a poor chin like Amir Khan. Canelo stopped him in the sixth round in 2016.

NEWS:   Caleb Plant on Canelo Alvarez: 'This man is in trouble'

“Anyone can lose on any given night. There’s possibly an issue with the judges, and the powers that be,” Algieri said about Canelo getting question decisions by the judges. “I tell Danny this every time; if you go out there and do your job, and do it every round, they can’t take it from you. More importantly, if you knock him out, that’s it, the victory is secured. Danny’s not going out there for a knockout, but if he gets him hurt, he’s definitely going to go for it,” Algieri said.

Jacobs will need to be ready to empty his gas tank if he gets Canelo hurt. Gennady Golovkin hurt Canelo twice in the later rounds last September, and he didn’t go after him with a flurry of shots to try and get the the knockout the way he needed to. Golovkin isn’t the type of guy that throws flurries. That’s the problem that he had. When GGG hurt Canelo, he was hitting him one punch at a time to try and take him out, and that enabled the Golden Boy star to easily move his head out of the way of his follow up shots. Jacobs is a different type of fighter. If he gets someone hurt, like he did with Peter Quillin in their fight in 2015, he’s going to flurry on them with a storm of shots one after another until he scores a knockout. It’ll be a lot harder for Canelo to make it to the end of the round if Jacobs hurts him, because he knows how important it is for him to get the victory. Golovkin made the mistake of believing he could beat Canelo by a decision in their first fight, and he found out the hard way that’s not easy to beat him that way.

“I think Canelo is going to be very surprised with Danny’s power,” Algieri said. “He’s a surprisingly tricky puncher. He’s got the power, but he sneaks in punches that you don’t see that hurts guys, and I think he’s going to be able to hurt Canelo early, and then he’s going to have to utilize his boxing skills from there out. I think it’s going to be important to get Canelo to fight of his back foot, and pressure him and push, especially as the rounds go on,” said Algieri.

Jacobs has got to put pressure on Canelo to force him to fight a lot harder than he wants to. If Jacobs fights slowly, Canelo will be able to pace himself, and go the full 12 rounds without gassing out. Golovkin was able to tire Canelo out because he made him fight three minutes of each round with the pressure that he was putting on him. In their first fight, Canelo was exhausted after six rounds, and he caved in from the sixth round on. Golovkin didn’t get the decision, but he showed the boxing public that he was the better fighter in there. In the Canelo-Golovkin rematch, GGG gave ground and let Canelo put a lot of rounds in the bank early on. When Golovkin go after Canelo in the second part of the fight, he was too far behind on the scorecards to get victory without him scoring knockdowns.

“Canelo has a tendency, especially in the GGG fights, he kind of pulls off the gas a little bit towards the end of the fight,” Algieri said. ”Danny has got to pick up. He’s got an extra gear, and I think that being the difference with him in his big fights. I think mentally the Golovkin fight was harder for Danny. That was when Golovkin was undefeated. There was no chink in the man’s armor. He [Jacobs] was fighting a boogeyman basically. Danny had that on his mind all during training camp. This fight is different. Danny is a little more mentally confident going into this fight. This is a very, very tricky fight because of the style Canelo utilizes. He’s a good fighter, but so is Danny. Danny is going in there to pull out all the stops to get the victory. If Danny does what he’s supposed to do, and does what he can do, I don’t think there’s going to be any questions,” Algieri said.

If Jacobs comes on strong in the second half of the fight, he’ll win the majority of the rounds against a tired Canelo, and be in a good position to get the victory. Jacobs acknowledges that the early rounds will be important as well, because that’s when Canelo likes to build up huge leads by starting quickly. Canelo starts fast and usually wins four to five of the first six rounds, and that makes it easy for him to coast during the second half during the middle rounds. Canelo then comes on at the end to win one or two of the championship rounds to seal the victory or the draw. The 12th round could be crucial this Saturday, considering that Canelo ALWAYS goes all out to win the final round. Jacobs needs to make sure that he doesn’t give away the fight the way GGG did by not fighting tooth and nail in the 12 round, because Canelo will try and seal the victory at the end.

Algieri revealed that he sparred twice with Canelo earlier in his career when he was 20-years-old. He had two sparring sessions with him in 2011. What Algieri noticed about Canelo is that he wasn’t a huge puncher. He was more of a combination puncher, but with fast hands. Like a lot of guys that rely on their hand speed, they tend to go downhill in their early to mid-30s once they start losing their hand speed. Canelo still has his speed now, but he might see his career tank once he slows down and he can no longer count on his hand speed to win him fights. Canelo will be turning 29 on July 18.


« Teofimo Lopez Jr. vs. Masayoshi Nakatani on July 19 on ESPN+