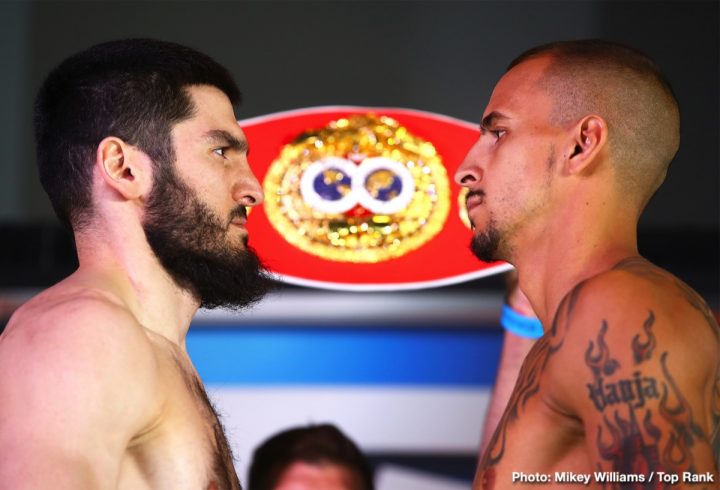 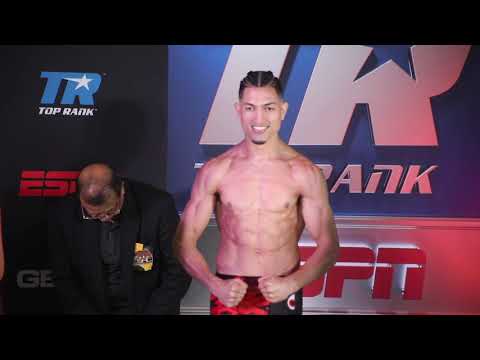 Kalajdzic, 27, weighed in at 173 lbs. Kalajdzic, 6’2″, will be enjoying a two and a half inch height and a three inch reach advantage over the 5’11 1/2″ Beterbiev, and that’s going to make it difficult for him to get close to him without eating one of his big shots. The size advantage that Kalajdzic has in this fight will give him a chance of winning, specially given Beterbiev’s problems in taking big punches. Jeff Page knocked Beterbiev down in their fight in December 2014. Beterbiev got back up and stopped Page in the second round.

Top Rank Boxing is putting their own show on Saturday night on ESPN and will be competing with the huge fight between WBA/WBC middleweight champion Saul Canelo Alvarez and IBF champion Daniel Jacobs that will be taking place on DAZN. It’s unclear how Beterbiev and Kalajdzic feel about having their important fight going up against such a highly popular fight like Canelo vs. Jacobs, but oh well. Top Rank knows what they’re doing, I guess. It’s perhaps not the wisest thing to do if Top Rank is trying to turn the 34-year-old Beterbiev into a star, because his fight with Kalajdzic might not be seen by a lot of boxing fans due to them tuning into the bigger contest between Canelo and Jacobs. It apparently wasn’t Top Rank’s intention to compete with the Canelo vs. Jacobs fight. They wanted to get the power punching talent Beterbiev a fight before Ramadan, and which begins on May 5 and ends on June 4th.

Beterbiev will be looking to keep his unbeaten record perfect on Saturday night against a fighter that gave Marcus Browne all he could handle in losing a controversial eight round split decision in April 2016. Kalajdzic knocked Browne down in the sixth round, and was fully in charge of the fight as it ended. That was a fight that made a name for Kalajdzic looked incredible in getting the better of Browne. It didn’t matter that Kalajdzic wasn’t given the win. The boxing public saw him as the winner of that fight.

“I would like to fight three or four times a year,” Beterbiev said fight fightnews.com. “I like to do this. We have the plan for each fight and it is not that there will be a knockout. Fans like knockouts and I like them, but we cannot try for it,” Beterbiev said.

Beterbiev’s last fight against the hard hitting Callum Johnson was a drama-filled one last October with both guys going down. Beterbiev was hurt badly in the second round of the fight, and he had to collect himself and start boxing to keep from getting clipped again. The talented two-time Russian Olympian Beterbiev may not have realized how hard of a puncher the British fighter Johnson was going into the contest. Beterbiev found out the hard way that he couldn’t afford to keep slugging with Johnson after he was dropped early by him. Beterbiev then made the necessary adjustments, and was able to take control over the fight and then stop him in the fourth round.

“That was not bad because I learned from it,” Beterbiev said. “That was a good test and it was hard and I stopped him.”

Beterbiev needs a win over Kalajdzic, 27, to keep in the hunt for unification fights against fellow Top Rank fighters WBC champion Oleksandr Gvozdyk and WBO champion Sergey Kovalev. WBA champion Dmitry Bivol likely isn’t someone that Top Rank will bother putting Beterbiev in with because he’s with different management. Beterbiev vs. Bivol would be an excellent fight, and perhaps even better than Beterbiev-Kovalev and Beterbiev-Gvozdyk.

Turning pro at 28, Beterbiev got a late start to his career due to all the time he spent in the amateur system in Russia. Beterbiev wanted to capture an Olympic gold medal, but he was foiled in losing controversial decisions to Zhang Xiaoping in 2008, and then Oleksandr Usyk in 2012 in the Olympics. In both fights, Beterbiev fought well enough to win, but he found out the hard way how difficult it is to win decisions in Olympic competition. Beterbiev has done a lot better as a pro, as he’s taken the judges out of play by knocking everyone out and not letting his fights be scored. That’s a wise thing to do. Beterbiev won the IBF title two years ago beating Enrico Koelling by a 12th round knockout in November 2017. Unfortunately for Beterbiev, he’s only fought once since then due to promotional problems. After close to a year out of the ring, Beterbiev successfully defended his IBF title last October in stopping Callum Johnson in the fourth round. Beterbiev has now been out of the ring for seven months since then, but he says he wants to fight three to four times a year. That would be a huge upgrade in activity if Beterbiev fight that fight often, but it’s hard to imagine that he’ll be able to do so. It’s not just staying healthy. Beterbiev’s promoters at Top Rank need to be able to find him opponents to fight.

Other weights on the card are as follows: