Adam Kownacki vs. Chris Arreola in the works or Aug.3 at Barclays Center, Brooklyn, NY 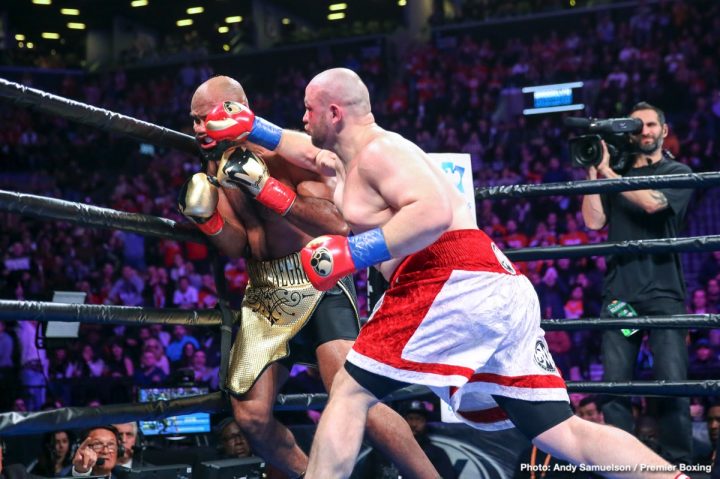 By Kenneth Friedman: Heavyweights Adam Kownacki and Chris Arreola have a fight in the works for August 3 on Premier Boxing Champions on Fox Sports at Barclays Center in Brooklyn, New York, according to Dan Rafael. This would be a tune-up fight for the highly ranked unbeaten #5 WBC Kownacki (19-0, 15 KOs) before he challenge WBC heavyweight champion Deontay ‘The Bronze Bomber’ Wilder in the first quarter of 2020.

The Kownacki vs. Arreola fight is being finalized to take place at the Barclays Center in Brooklyn. Kownacki has a large fan base in the New York, so it’s a good location for the fight.

Arreola with big advantage in experience

The 38-year-old Arreola is from Southern California. Arreola’s not a huge draw in the East Coast, but he’s well known among the older hardcore boxing fans that remember him from his fights against Vitali Kitschko, Bermane Stiverne, Chazz Witherspoon, Tomasz Adamek, Jameel McCline, Eric Molina, Seth Mitchell and Deontay Wilder. Arreola lost twice to Stiverne, and was beaten by Adamek by a controversial decision, Wilder and Klitschko. Arreola destroyed Molina by a first round knockout in 2012.

Former three time world title challenger Arreola (38-5-1, 33 KOs) will have a chance to score an upset and put himself in position for a fourth world title shot if he can beat the 30-year-old Kownacki on August 3. It’s not likely, but it’s possible. Arreola hits hard, and he’s got much more experience against high level fighters than Kownacki at this point in his career. Arreola is being brought in as the B-side opponent for the hard-hitting Kownacki. For Arreola, he’ll be in the position as the potential spoiler. It’ll be interesting to see if Arreola can pull off the upset to wreck Kownacki’s plans for a title shot against Deontay Wilder in early 2020.

The 38-year-old Arreola has won his last two fights since losing to Wilder by an eighth round stoppage in July 2016. Arreola was out of the ring for 2 1/2 years after his loss to Wilder. Since resuming his career in 2018, Arreola has defeated lower level fighters Maurenzo Smith and Jean Pierre Augustin. The wins for Arreola over those two weren’t enough to earn him a top 15 ranking with any of the four sanctioning bodies. That could change if Arreola defeats Kownacki on August 3.

A win over the Polish fighter will undoubtedly result in Arreola being given a top 15 ranking, if not a world title shot against Wilder. In a perfect world, Arreola will get a big money rematch if he beats Kownacki on August 3, but that’s probably not in the cards. Even if Arreola does beat Kownacki, his chances of a title shot against Wilder would be low, given that that he was soundly beaten by him just three years ago in 2016. There’s no demand for a second fight between Wilder and Arreola. To get a rematch with Wilder, Arreola would likely need to beat someone like Luis Ortiz. Arreola is now trained by Joe Goosen after having been trained by Henry Ramirez his entire career.

It’s important that Kownacki look good in beating Arreola in this fight. If Kownacki wants to make sure he gets the fight with WBC champion Deontay Wilder in early 2020, he’s got to make sure he looks impressive in beating Arreola. Kownacki struggled to beat former International Boxing Federation heavyweight champion Charles Martin by a close 10 round unanimous decision last September in Brooklyn. Kownacki won the fight by the scores 96-94, 96-94 and 96-94.

Kownacki has recent wins over Gerald Washington, Charles Martin, Iago Kiladze and Artur Szpilka. Those are the only notable wins on Kownacki’s 10-year resume as a pro. The rest of the guys that hes faced have been little known fighters.

With Arreola’s punching power and experience, you can’t rule out an upset win for him over Kownacki. If Arreola is able to take Kownacki’s heavy shots long enough to wear him down with his won big punches, we could see an upset in this fight.

IBF welterweight champion Errol Spence Jr. and WBC champion Shawn Porter were previously being talked about as being the main attraction for the August 3 card on Fox at the Barclays Center, but that fight is being moved to the summer/fall. It’s still unclear whether the Spence vs. Porter fight will take place at all.