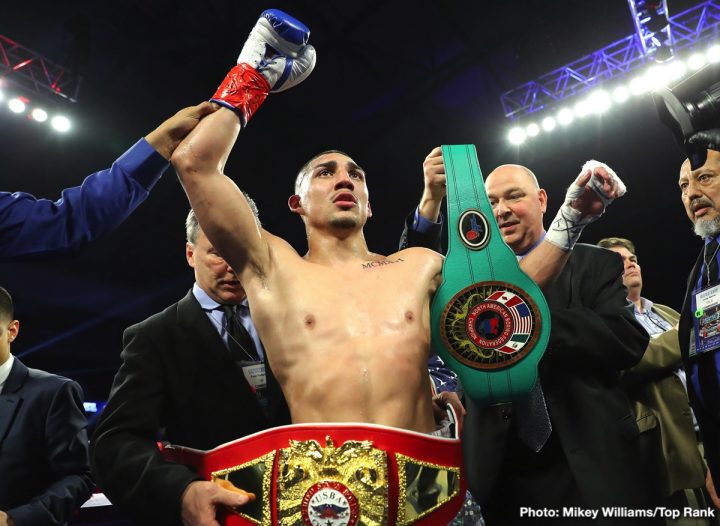 Lopez, 21, says he’s informed his promoters at Top Rank that he wants the fight against Lomachenko by January of 2020 at the latest. After that, Teofimo plans on moving up to light welterweight to go after the champions in that weight class. He doesn’t care who they are. He wants whoever holds the belts. Ideally, Lopez believes he can go as high as 147 right now, saying that he’s sparred with welterweights Shawn Porter and Yordenis Ugas in the past and he knows he can compete with them.

Lopez wanting the fight against IBF champion Commey in July will need Top Rank to agree to that. It’s well known that Lomachenko wants the unification fight against Commey. If Lopez tries to get in on that action by taking the Commey fight instead of Loma, there could be some friction between the 2-time Olympic gold medalist from Ukraine and his promoters at Top Rank. Lomachenko is in a hurry to try and unify the lightweight division for some reason. Lomachenko would be better off forgetting about unifying and focusing instead on going after the fights the boxing world wants to see him against. Lomachenko and Lopez would be a great fight now rather than wasting time on the two beefing about which of them should get the Commey fight.

“The reason I say we’re going to fight for the world titles this year is because I’m going to make it that way,” Teofimo Lopez said to DAZN. “Top Rank is saying they’re going to have me fight someone #3 or #10, but they’ve been having problems trying to find a fight for me.”

If Top Rank chooses to match Lomachenko against Commey, and then have him fight WBC lightweight Mikey Garcia, it’ll put Lopez in a position where he’ll need to make a decision whether to stay at lightweight a little longer than January or next year or move up to 140 like he’s talking about doing. It won’t be as easy for Lopez at light welterweight compared to the way it’s been in the lightweight division. Lopez is basically already a 140 pounder. He can make weight for the 135 lb division, but he’s massive at that weight after he rehydrates. Teofimo would need to fight guys his own size if he moves up to light welterweight, and he may discover that he can’t dominate guys like Regis Prograis, Josh Taylor, Jose Carlos Ramirez, Ivan Baranchyk, Kiryl Relikh and Maurice Hooker. Can Top Rank even get fights for Lopez against those fighters? That would be the next question. If Top Rank is only able to match Lopez against their own fighters within their stable, then his move up in weight will a waste of time. Lopez might need to skip the 140 lb division altogether and move to 147 so that he can fight WBO welterweight champion Terence Crawford for his belt. That would be a big step up for Lopez if he has to go all the way to 147 to get fights once he moves up in weight.

It’s not all that surprising that Top Rank Boxing is having problems getting elite level contenders to agree to fight Lopez. He’s looking hard to beat right now, and fighters and their contender don’t want any of that work.

“Tank is strong, but it isn’t going to win you fights you can’t hit anybody,” Teofimo said about Gervonta Davis. “Loma, he pitty pats, but he breaks you down little by little. Little small punches add up.”

Teofimo might be selling Gervonta short in saying he can’t hit anybody. If that were the case, Tank Davis wouldn’t be 21-0 with 19 knockouts, and he wouldn’t be the WBA Super World super featherweight champion. If Mayweather Promotions were willing to work with Top Rank, the boxing public could see a great fight between Gervonta and Teofimo. Unfortunately, that’s probably not going to happen, especially with Teofimo poised to move up to 140 at the end of the year.

“I’d say Tank,” Lopez said when asked who he wants to fight.

It would be a great fight to see Teofimo and Tank Davis fight each other, but that’s not likely going to happen anytime soon. The two are already one division apart, and Teofimo is about to move up another weight class to the 140 lb division. Gervonta isn’t going to move up two divisions just so that he can fight Lopez at 140, and put himself at a disadvantage in doing so.

“I got Crawford. Khan starts out fast [then loses]. Khan says he’s a different fighter than he was a couple of years ago. You can be a different fighter, but the chin don’t change. As long as Crawford is composed and has the right game plan, he’ll stop Khan. I feel if he goes the distance with Amir Khan, and I’m not taking anything away from Amir Khan, that kind of hurts Crawford in a way,” Lopez said.

Anything is possible with the Crawford-Khan fight. Lopez is picking fellow Top Rank fighter Crawford, but Khan could surprise a lot of boxing fans by using his speed, size and amateur pedigree to get the better of Crawford. Even though Crawford is ranked #2 on Ring Magazine’s pound-for-pound rating, he hasn’t ever beaten anyone that was the elite in their divisions. Crawford has been matched against fighters Julius Indongo, Thomas Dulorme, John Molina, Jeff Horn and Jose Benavidez Jr. Khan could beat Crawford, and the only the boxing fans could say he was a product of hype and soft match-making by Top Rank.

“Tatli, and then [Richard] Commey, and then defend it against Lomachenko or Pedraza, Mikey, any of those guys,” Teofimo said when asked who he plans on fighting in his next three fights. “I don’t know what Mikey is going to do in his next. In my next three fights after April 20th, I know I’m fighting again in July. Most likely it’s going to be against Commey. Hopefully we make that fight happen. I’ll defend the [IBF] title, and hopefully we unify against Lomachenko. If they’re [Top Rank] not making the fight happen, I told Top Rank the latest I’ll accept this is in January. After January, my body wants to go up. Who do I want to fight at 140? The world champions. If we’re going to become world champion at 135, we’re going to go right to the champions. What weight class is the highest? 147. I sparred with Shawn Porter and [Yordenis] Ugas, and I dug it in with them,” Lopez said.

Commey, 32, is a talented champion at lightweight. He’s considerably older than Lopez, and he’s got the power, size and experience to give him problems. It’s hard to imagine Top Rank letting Teofimo take the fight with Commey instead of Lomachenko. If Top Rank is going to match Lopez and Lomachenko against each other in 2019 or early 2020, then it really doesn’t matter if Lopez is the one that fights Commey in July rather than Lomachenko. If the two Top Rank fighters wind up facing each other, then the IBF belt that belongs to Commey will be up for grabs most likely when they face each other.

Teofimo, 21, has a tough fight on his hands against the 31-year-old Tatli on the undercard of Terence Crawford vs. Amir Khan on ESPN PPV at Madison Square Garden in New York. Teofimo wants to fight better opposition at lightweight, but he’s been given #10 WBC Tatli for his next fight. Whether that’s all Top Rank could find or if they’re preceding on the side of caution with the young New Yorker is unclear. It’s more likely the case that Top Rank doesn’t want to take any chances with Teofimo.

Top Rank has promoted Terence Crawford for years, and the best opponent they’ve found for him after all this time with Yuriorkis Gamboa. Crawford hasn’t fought any of the elite level fighters at 140 and 147. Another Top Rank fighter Gilberto Ramirez hasn’t fought the elite level fighters as well. It’s possible that Teofimo will be matched carefully like those guys, which means he won’t fight anyone risky like Mikey Garcia, Regis Prograis, Jose Ramirez, Josh Taylor or Ivan Baranchyk. Hopefully, Top Rank doesn’t match Lopez in the same way they’ve done with Gilberto and Crawford, because he looks like he’s capable of beating the elite. 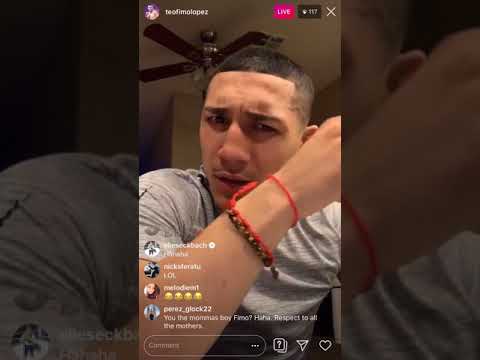 
« Khan says might NEVER fight Brook if he beats Crawford