Khan says might NEVER fight Brook if he beats Crawford 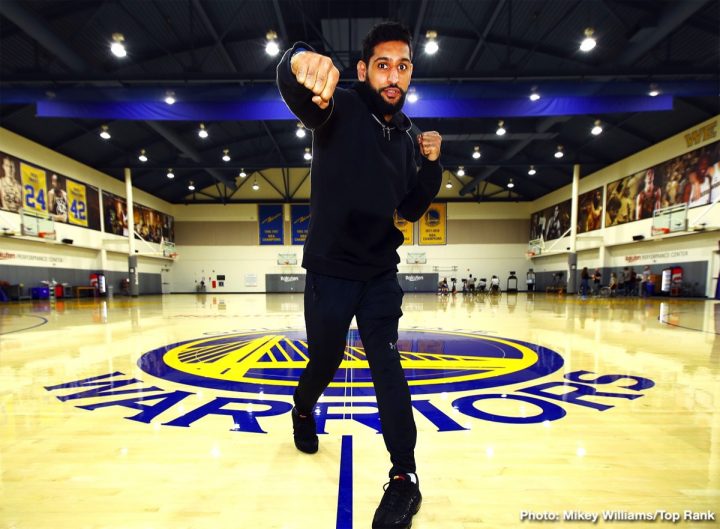 By Tim Royner: Amir Khan thinks that the Kell Brook fight could go down the drain for good if he defeats WBO welterweight champion Terence Crawford this month on April 20. A victory over Crawford (34-0, 25 KOs) would result in Khan (33-4, 20 KOs) needing to give the Top Rank fighter an immediate rematch.

If Khan wins the rematch with Crawford, he would then he looking to defend the WBO belt and/or fight the other world champions at welterweight in unification fights. The good news for Brook is Khan is highly unlikely to beat Crawford. Khan can talk about the fight with Brook being potentially down the drain, but it’s so unlikely to happen, him beating Crawford on April 20, that it’s best that he continue to plan on the Brook fight taking place later this year. No point in ruffling Brook’s feathers unnecessarily by making him get fearful of him not getting the fight that he’s been waiting on for the last two years of his career.

Brook (38-2, 26 KOs) has stalled out his own career in the last year fighting low level opposition, not fighting frequently, and looking poor. Brook, 32, hasn’t kept himself among the top in boxing due to him sitting and waiting on the Khan fight. In his last two fights, Brook has beaten junior middleweight fringe contenders Michael Zerafa and Sergey Rabchenko. He’s had offers from the champions at 154, Jarrett Hurd and Jermell Charlo, to fight them, but he’s failed to do so.

“If I beat Crawford, and I firmly believe I can, that probably kills the Brook fight,” Khan said to the dailymail.co.uk. “If Crawford does beat me the fight with Kell could still happen.”

Just where Brook will go if he can’t get the Khan fight is the big question. Brook calling himself a junior middleweight, but he doesn’t have the size to be fighting the bigger fighters in the division like Jarrett Hurd, Jermell Charlo, Tony Harrison and Jaime Munguia. If Brook can move back down to 147, he could face the likes of Manny Pacquiao, Shawn Porter, Danny Garcia, Terence Crawford, Keith Thurman and Errol Spence. Brook wouldn’t need Khan.

Brook obviously would be getting a bad deal if Khan loses badly to Crawford on April 20, but it doesn’t look like he has any other options besides him for a good payday. Brook’s promoter Eddie Hearn should be trying to set him up with the likes of WBA welterweight champion Keith “One Time” Thurman, WBC champion Shawn Porter, Danny Garcia or Manny Pacquiao while he waits for the Khan fight. Brook needs to stay busy. He’s doing the worst possible thing by poor opposition and just waiting on the Khan fight. It looks too much like a cash out in the eyes of the British boxing public. The casual U.S fans don’t follow Brook. Some of them might remember Brook from his losses to Gennady Golovkin and Errol Spence, but that’s about it.

Khan says the money that he’s making fighting Crawford, 31, is about the same as he would make if he fought Brook. But there’s a lot more to gain for Khan in beating Crawford, one of the top pound-for-pound fighters in boxing, compared to Brook, who has done zero with his career in the last five years. Brook lost to Gennady Golovkin and Errol Spence in consecutive fights in 2016 and 2017. Since those loses, Brook has been matched weakly by Hearn in putting him in with Zerafa and Rabchenko.

“I know I’d beat him easily. But the timing has to be right for me. Then I would take it if it made financial sense,” Khan said about the Brook fight. “There isn’t much difference in the money.”

Khan is right. There’s a lot more for him to gain in fighting Crawford than there is for Brook, who has done nothing since his controversial win over Shawn Porter in 2014. That was the high point in Brook’s 15-year pro career. After Brook won the IBF title from Porter in a questionable win, Brook took it easy with soft defenses against Jo Jo Dan, Kevin Bizier, and Frankie Gavin before stepping it up by moving up to middleweight to challenge former IBF/WBA/WBC middleweight champion Gennady Golovkin for his titles in September 2016.

Brook made that move following Khan’s failed attempt at capturing the WBC middleweight title from Saul Canelo Alvarez in May 2016. Khan was knocked cold by Canelo in the sixth round, but it was a good payday for him. Brook then got in on the act in moving up to middleweight to challenge GGG for his bests in the same year.

It turned out for the worse for Brook though, as he suffered a fractured left eye socket in the loss. The eye injury subsequently required surgery t repair. Instead of taking a tune-up fight in his next match, Brook defended his IBF belt against Spence in May 2017, and he suffered another eye injury in getting stopped in the 11th round.

Brook had to have surgery on that eye. Understandably, Brook was given a soft opponent in Rabchenko when he finally returned to the ring in March of last year. But what didn’t make sense is Brook then being matched by Hearn against Zerafa last December. It’s believed that Hearn thought he was going to be able to make the Khan-Brook fight in early 2019, so he had both fighters taking easy opponents.

Top Rank came along and threw a wrench in the works by offering Khan a ton of money to challenge Crawford for his WBO title on ESPN PPV. Khan liked the idea of fighting the pound-for-pound star, so he agreed to it. Whether Khan wins or loses, he’ll get a good payday for the Crawford fight, and he can still take the fight with Brook later on. The British boxing fans will likely be willing to purchase the Khan vs. Brook fight on Sky Box Office regardless of what happens in the Crawford-Khan fight this month.

Khan has some other fights that he can take even if he loses to Crawford. Khan can still make good money fighting Pacquiao, Thurman, and taking a rematch with Danny Garcia. Boxing fans would even like to see Khan and Lamont Peterson fight again. Peterson recently retired, but he would be a good option for Khan as well.