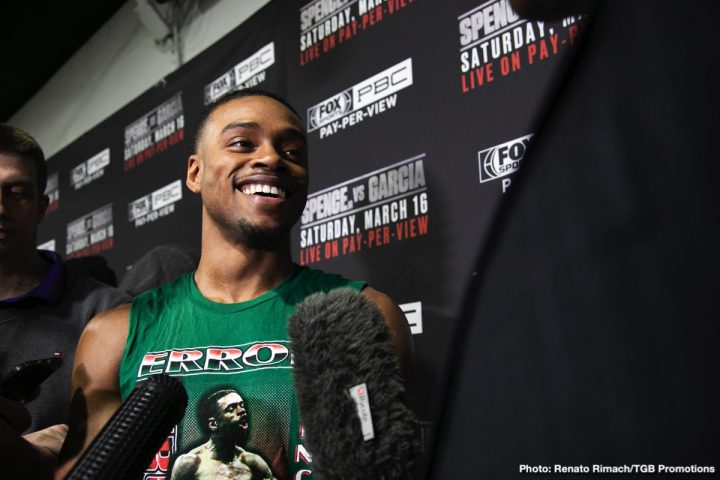 By Mike Smith: Errol Spence Jr. and Jermell Charlo fired back at Demetrius Andrade following his negative comments about both of them the other day. Andrade (27-0, 17 KOs) called out Spence to move two weight classes to challenge him for his WBO middleweight title.

Andrade also said to Fighthype that Spence is “one dimensional”, and “Not the special fighter that he thought he was” after he failed to knockout lightweight Mikey Garcia last month. Andrade predicted that Spence will lose to WBO welterweight champion Terence Crawford. As for Jermell Charlo, Andrade said he saw him losing to Tony Harrison last December

Spence said this in response to Andrade on Twitter:

“Who has Andrade fought? I didn’t even know he had a belt.”

Spence is right in questioning who has Andrade fought. He hasn’t fought any big names during his career. Andrade’s biggest fights came against these fighters:

Andrade, 31, captured the vacant WBO middleweight title last October in beating little known Walter Kautondokwa by a 12 round unanimous decision on DAZN at TD Garden in Boston, Mass. Since that win, has successfully defended his WBO belt once, defeating fringe contender Artur Akavov by a 12th round knockout last January. Andrade complains that the big names Saul Canelo Alvarez, Gennady Golovkin and Daniel Jacobs aren’t fighting him, and yet he’s not facing the right fighters to increase his popularity. Akavov is not the type of fighter that Andrade should be fighting to make him a bigger name in boxing.

With Errol, he’s kind of a one-dimensional guy right now. He’s relying on his power so much,” Andrade said to fighthype. “It’s kind of funny…you DON’T knock down Mikey Garcia. That tells me that he’s not the special fighter that we all thought he was. Errol Spence wants to fight somebody two weight classes under him. Tell him to come up to 160. I’ll put the belt on the line,” Andrade said in calling out Errol to come up to middleweight to challenge him for his WBO belt.

The fighter that Andrade SHOULD be calling out is interim WBC middleweight champion Jermall Charlo. Those two are in the same division, and they were supposed to fight in the past, but it didn’t happen. It would look a lot better if Andrade started pushing for a fight against Jermall than him picking a fight against Errol.

It does make Andrade look desperate that he’s calling out Spence instead of looking to call out fighters from his own weight class or higher. If Andrade called out one of the light heavyweight champions like Dmitry Bivol, Artur Beterbiev, Sergey Kovalev, Marcus Browne or Oleksandr Gvozdyk, he might have some success. If nothing else, it would look a lot better in the eyes of the boxing public in seeing Andrade call out bigger fighters rather than guys two weight classes below him.

It was Mikey Garcia that called out Spence for a fight. It’s not like Spence scoured the lightweight division in search of a small fighter to blast out. Mikey was the one that wanted the fight with Spence, so he accommodated him. At the time, Spence was trying to get WBC welterweight champion Shawn Porter to fight him in a unification fight. Mikey came out of nowhere in calling Spence out. with Mikey’s popularity, Spence wasn’t going to turn the fight own, especially once a lot of boxing fans started talking up the fight.

Here’s what Jermell Charlo said on his Twitter towards Andrade:

“Hahahaha…coward…This mfer trolling EJ (147). Seriously, he ain’t got s—. He’s better off retiring, because that little chump change he’s fighting for got him something desperate AF. Unfortunately, he signed with the wrong people. Y’all don’t remember that fool backed out the fight the week it before it was scheduled. My brother moved up. Still ain’t heard s— from him. F— dude. He wack in boxing and the streets. Might as well take the advice and move up again or retire and get a regular job. The people he got working for him did a horrible job with his career. I hope this video wash all his fans away. The little that he has. Lions only for life. Greed don’t get you s—.”

Andrade hasn’t been able to take advantage of the titles he’s won, both at 154 and 160. At junior middleweight, Andrade held the WBO title from 2013 to 2015, and the WBA belt in 2017. But Andrade didn’t make enough title defenses for him to increase his popularity to any great extent. He won the World Boxing Organization 154 lb title in 2013, and made only one defense of the belt in beating Brian Rose. The WBO ended up stripping Andrade of the title for failing to defend it on an annual basis. In March 2017, Andrade captured the WBA junior middleweight title in beating Jack Culcay by a 12 round split decision. Andrade then vacated the title, and moved up to 160. He didn’t take advantage of being the WBA belt holder by looking to face the likes of Jarrett Hurd, Erislandy Lara, Jermell Charlo or Jermall Charlo.

“When I watched it [Tony Harrison vs. Jermell Charlo fight], Harrison looked like the more professional fighter,” said Andrade. “His [Jermell Charlo] stance was all over the place, Charlo or whatever his name is. He was just sloppy. His timing wasn’t right…It just looked like Tony Harrison was the more professional righter in there that night,” Andrade said.

Andrade will be fighting next on June 22 or 29th against his WBO mandatory challenger Maciej Sulecki. Gennady Golovkin chose not to take the fight with Andrade, and Canelo Alvarez hasn’t looked his way either. With Andrade signed with DAZN, it’ll look funny if those guys never fight him. Andrade’s promoter Eddie Hearn of Matchroom Boxing USA seems to think that he’ll be able to get him a fight against one or both of those fighters. We’ll see if that’s the case. If Andrade loses his WBO title to Sulecki in June, then he can probably forget about a fight against GGG or Canelo, ever. Canelo is talking about wanting to move up to 175.

Gennady Golovkin vs. Steve Rolls official for June 8 on DAZN at MSG »