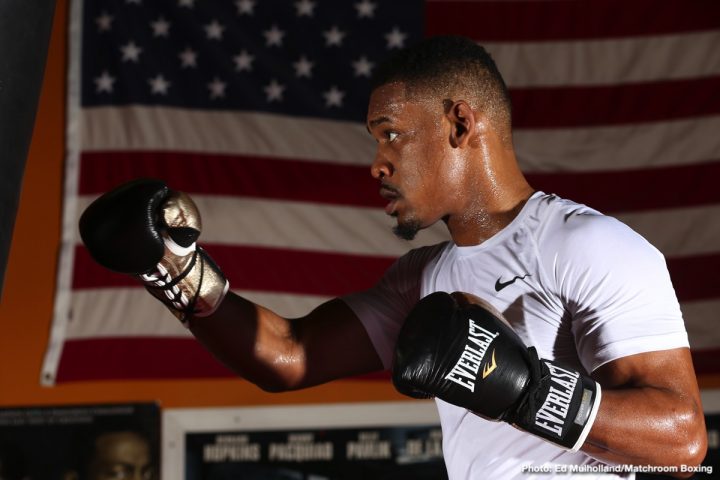 By Sean Jones: Daniel Jacobs was taking verbal shots at Saul Canelo Alvarez on Monday, saying that he thinks he lost BOTH fights against Gennady Golovkin in the past. Canelo escaped the two GGG fights with a 1-0-1 record, but that’s not how Jacobs, 32, saw those fights. He points out that Canelo should have lost to Triple G, as well as some other fighters.

Canelo and Jacobs will be squaring off in 2 1/2 weeks from now on May 4 on DAZN at the T-Mobile Arena in Las Vegas, Nevada. The winner of the fight may end up fighting GGG in a rematch, but that remains to be seen.

Will Jacobs’ name be added to this list on May 4?

A third fight may eventually happen between Canelo and Golovkin (38-1-1, 34 KOs), but the boxing public are going to need to demand it. Canelo, 28, is already sounding like he’s not eager to fight Triple G a third time.

“There are some controversial fights that he’s had that where I thought he lost, including both Golovkin fights,” Jacobs said. “It’s a little annoying to have to keep talking about the judges and Canelo getting favoritism, but it’s also a fact in most people’s mind so that’s why it comes up so much…I don’t want the mindset to be going in there to fight Canelo and the judges. I don’t need any more stress in this fight as Canelo is a force in himself and it’s going to take a lot to figure him out,” Jacobs said.

It’s not a good idea for Jacobs to stick his head in the sand and pretend that the chances of him losing a controversial decision doesn’t exist in this fight. It does exist, whether Jacobs wants to focus on it or not. For that reason, it would be a good idea for Daniel to make sure he puts in enough effort in each round to make sure that the judges able to see clearly that he’s winning the rounds. Golovkin obviously didn’t do enough to impress the judges that worked his two fights against Canelo Alvarez.

Looking at those two fights in an objective manner, you can see that GGG let Canelo win most of the first six rounds in both fights. Knowing that Canelo is a fast starter, Jacobs (35-2, 29 KOs) needs to be conscious of the fact that he’s going to have to fight at 100% capacity in rounds 1 though 6 on May 4 to keep Canelo from running away with the fight, because once he’s built up a lead, it’ll be easy for him to coast in the second half the way he does. Canelo goes all out to win most of the first six, and then he comes on late to take the 12th, and that’s all there is to it.

The best thing Jacobs can do to himself get the victory is to stop thinking about the fight going 12 rounds, and start thinking about knocking Canelo out. That’s the easiest way for Jacobs to make sure he doesn’t end up like GGG, Trout and Lara. If Jacobs takes the judges out of play for the fight, then they’ll just be helpless spectators, watching the Canelo-Jacobs fight play out without them being able to put their spin on the final outcome like they did in the two Canelo-GGG fights. Jacobs has the punching power to KO Canelo, but he’s got come forward and throw punches in bunches for him to do that.

In Jacobs’ recent fights against Sergiy Derevyachenko and Maciej Sulecki, he was backing away too much in those fights, and he enabled those fighters to stay in there for the full 12 rounds. Jacobs BARELY won those fights. It’s easy to predict that if Jacobs fights like that against Canelo, he’ll lose for sure. There’s no way the judges will give Jacobs the win against the home fighter Canelo if he’s backing away, and letting him come forward like he was doing in his last two fights against Triple G and Rocky Fielding. the crowd will be cheering for Canelo if he comes forward, and that in turn will impress the judges, making it easy for them to justify giving the rounds to the Golden Boy Promotions star.

Jacobs lost to Golovkin in 2017 by not standing in front of him to let his hands go. Jacobs came on in the second half of the fight, but he’d already given away too many rounds in the first six rounds. Jacobs let Golovkin take most of the first six rounds by default. It’s the same mistake GGG made in his two fights with Canelo. He fought passively and let Canelo win most of the rounds with minimal effort. Jacobs is a pretty smart guy. He has to know from watching Canelo’s two fights with GGG that he thrives on winning the early rounds, and then milking his lead long enough for him to avoid losing.

Canelo (51-1-2, 35 KOs) believes he’s going to figure out Jacobs in the first three or four rounds, and then come up with a plan to beat him. Plan-A for Canelo is likely going to see him coming forward to try and land body shots and uppercuts to take him out. If Jacobs backs away from Canelo, the judges are going to give the rounds to the Golden Boy star. And if Jacobs does stand his ground, he’ll put himself at risk of getting knocked out if he doesn’t throw enough punches to keep Canelo busy on defense. What Jacobs has to do is make Canelo fight harder than he can handle, and then look to take advantage of the situation when he tires out. It’s possible to do, but it’ll take courage on Jacobs’ part. He can’t fight scared like he did against Derevyanchenko and Golovkin.