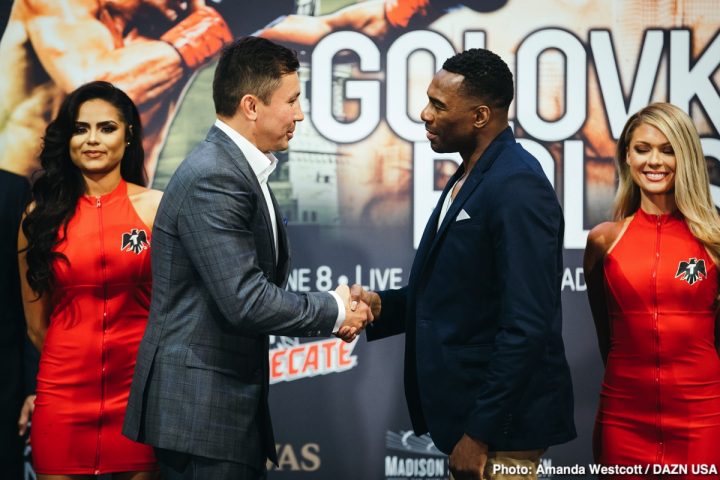 By Dan Ambrose: Robert Garcia says he’s ready to take over as former middleweight champion Gennady Golovkin’s new trainer, and help him defeat Saul Canelo Alvarez in a third fight later this year in September. Golovkin (38-1-1, 34 KOs) announced this week the big news that he’s cutting ties with his long-time trainer Abel Sanchez, who he’d been with for nine years since 2010.

Robert Garcia is one of many trainers that would love to be able to train GGG for the remainder of his career.

“It’s up to GGG. If GGG is thinking, ‘I’m already good enough anyway. I already how to train. I already know how to run. I can do it myself. So, someone guiding me, doing mitts, that’s all I need,'” trainer Robert Garcia said to Fighthub about Golovkin and his search for a new trainer. “If that’s all he needs, he’ll be fine. But he could do better. He also could get a little bit better with his footwork maybe, using his jab a little bit more, and speed a little bit more. Maybe there’s a trainer that can teach him a little bit more. But maybe GGG doesn’t want that anymore. Maybe he just wants to cash out with all the money, and pay his loved ones, the people he really cares for,” Garcia said.

Would Golovkin want to train with Robert Garcia, who said he thought Canelo Alvarez won the second fight with GGG, and said he though the draw for the first fight between them was a fair decision. Robert’s comments about the two Canelo-Golovkin fights are vastly different from how a lot of boxing fans, including GGG saw those contests. Golovkin lives in Southern California, so it would be a good fit for him to take a little drive to train at Garcia’s Oxnard, California gym rather than having to go to Big Bear, California to trainer with Abel each time.

Garcia’s gym in Oxnard isn’t the most beautiful of areas. Oxnard is more of a blue collar town compared to Big Bear, which has a lot of large houses situated in the mountains, owned by wealthy people. Golovkin going on runs in Oxnard won’t be the same as running in the mountains of Oxnard. It’ll be less glamorous, but it would be the same way if Golovkin were to train at Freddie Roach’s Wildcard gym in Los Angeles, California.

“Maybe that’s his plan. But if he really thinks he can’t learn anymore, he’s wrong,” Robert said. “He can still learn more. He can improve and do a little bit better maybe. Maybe he doesn’t care if he beats Canelo. Maybe he only cares that he makes $30 million for the third fight. It depends on what he wants. If he cares about beating him, then he should look for the right trainer. I would love to [trainer GGG], but I’m saying there’s great trainers out there. I would love to.”

Garcia’s not sure if Golovkin is still interested in improving at this point in his career. He says that he could be looking to just cash out by making money, and not caring to put in the work to try and improve. The attitude that Robert has of Golovkin would make it hard for him to hire him as a trainer.

“I want to build on what I have already achieved and continue to better myself. Therefore, I will not be training with Abel Sanchez,” GGG said. “This was not an easy decision for me and it is not a reflection on Abel’s professional abilities. He is a great trainer, a loyal trainer, and a Hall of Fame trainer,” said Golovkin.

Golovkin needed a change, because he wasn’t getting the same results. Sanchez looked like he didn’t have any answers for the things that Canelo was doing in the fights with Golovkin. He should have had Golovkin cutting off the ring by going to his right in the first fight. Aside from that, Golovkin had the right idea to use his jab to control the fight from range. The judges that were assigned to the fight were more impressed with Canelo’s occasional power shots.

“He’s a great person. He’s shown me nothing but respect,” Garcia said. I’ve never said anything negative about him. I did think that Canelo beat him in the second fight. In the first fight, I thought a draw was fine. But when I saw it on TV, I told everybody I thought GGG won the fight. Maybe I could train him to beat Canelo in the third fight? Who knows? It depends on his mentality. If he really wants to improve and beat Canelo in the third fight, then he needs someone to teach him. If he wants to cash out, he’s already good enough. He’s already good enough to beat everybody anyway,” Garcia said.