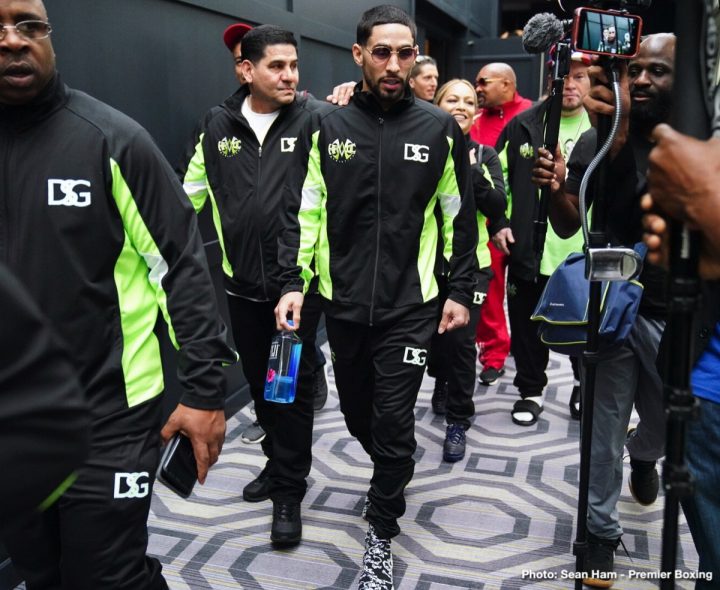 Garcia vs. Granados will be taking place at the Dignity Health Sports Park, Carson, California. On the line for the fight will be the vacant World Boxing Council Silver Welterweight title. The winner of the fight will in position to challenge WBC welterweight champion “Showtime” Shawn Porter. Garcia lost to Porter by a 12 round unanimous decision seven months ago on September 8 by the scores 116-112, 115-113 and 115-113. Garcia says he should have had his hand raised in that fight, as well as in his narrow 12 round split decision defeat to Keith “One Time” Thurman in March 2017. Danny wants to avenge both of those defeats, but he’s got to get Granados out of the way first before he can move on to try and get a fight against one of those two fighters.

During last Friday’s weigh-in, Garcia and Granados had heated words when they were facing off. When Granados turned away from the face off, Garcia continued to stare at him and talk trash. Granados then turned back around to face him, and the two exchanged words briefly before going their separate ways. There was no risk of them going after each other, as these two are professionals and not the type to overheat before their fight. Garcia weighted in at 146 3/4 pounds, and looked thin. Granados came in at 146 lbs on the dot.

The way Danny Garcia looked at the weigh-in, it’s likely he’s going to put on a lot of weight by the time he’s finished rehydrating and is ready to step inside the ring. Garcia said this week that he plans on taking just two more fights at welterweight before he moves up in weight to the 154 lb weight class to go after the world champions in that division. Garcia has outgrown the 147 lb weight division after five years. Garcia moved up to welterweight in 2014, and he’s had eight fights. His record at 147 is 6-2. That’s not bad. His only defeats were his close losses to Porter and Thurman.

“I got to go out and dominate. That’s what I plan to do,” Adrian Granados said after the weigh-in on Friday.

Granados has been brought in as the opponent for Garcia. In other words, this isn’t a fight that Granados is expected to win. He’s lost two out of his last five fights since 2017. The two defeats came at the hands of Adrien Broner and Porter. The loss to Broner was a controversial 10 round decision defeat in Broner’s hometown of Cincinnati. It looked like Granados deserved the victory, but he was fighting in Broner’s hometown, so he didn’t do enough to impress the Ohio judges.

“Welcome to the big leagues, little b—-,” Danny Garcia said when asked what he said to Granados during their face off on Friday following their weigh-in. “I just got to go out there and be the best Danny Garcia I can be. I’ve got to show the world I’m one of the best. I feel great. I had a tremendous training camp, and it’s time to go,” Garcia said.

Granados is finding himself a popular fighter by PBC welterweights, as he’s already fought Adrien Broner and Shawn Porter. This is the third big name PBC welterweight that Granados is fighting in the last two years. If Granados wins this fight, he can move on to bigger matches against IBF champion Errol Spence Jr., WBA Super World champion Keith Thurman and WBA ‘regular’ champion Manny Pacquiao. What makes Granados so in demand by PBC fighters is he’s well known, tough, and yet beatable. However, Granados has the ability to out-tough more talented fighters than himself, as we saw in his fight against Broner.

Granados didn’t get the decision, but he clearly beat Broner in that fight. Being the B-side fighter makes it difficult for Granados to get the nod when facing big name guys. If Granados can put a little more effort tonight, he might off the upset, because Danny was looking weight drained at the weigh-in. It looked like Garcia a lot a hard time making weight this time around. That’s obviously why he’s talking about wanting to move up to 154. The 31-year-old Garcia’s body can no longer get down to 147 at this point in his career. His metabolism is slowing down, and it’s harder for him to make weight like he used to. Granados could take advantage of that if Garcia is weakened from the strain of getting down to 147.

This could be a bad match-up for Garcia, due to Granados’ tough inside game. He’s got a similar style to Shawn Porter, who Garcia just lost to. Granados isn’t as heavy as Porter, and he doesn’t clash heads with his opponents as much as Shawn, but he’s still very tough. Granados is a good fight for Garcia if his objective is to fight a rematch with Porter in his next match. This would be a good contest to get Garcia ready for a rematch with Porter. However, Errol Spence is likely to be facing Porter in September. If Porter loses to Spence, it’s going to look funny if Garcia faces Porter instead of Spence. It would give the impression to the boxing public that Garcia is ducking Spence. It would be a bad look for Garcia unless he were to face someone else like Thurman or Pacquiao. Getting a fight against Porter with him coming off of a loss to Spence would be interpreted by fans a weak move by Danny.

In other purses on tonight’s Premier Boxing Champions on Fox card, heavyweight Andy Ruiz Jr. will be getting a $200,000 purse for his fight against journeyman Alexander Dimitrenko. The big 6’7″ Ukrainian Dimitrenko will be getting $75,000.

Here are the other purses for the other fights on the Garcia vs. Granados card on PBC on Fox:


« Manuel Charr: “Anthony Joshua knows we want this fight. The ball’s in his court!”