Khan: ‘I’m not scared of Crawford’ 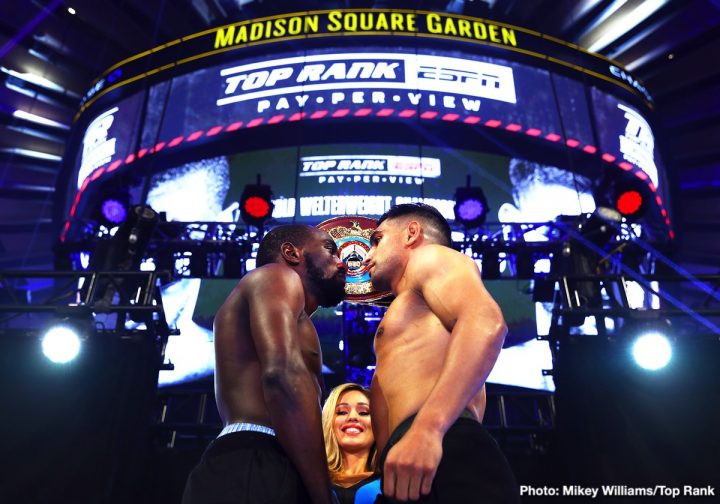 By Kennith Friedman: Amir Khan (33-4, 20 KOs) says he’s ready to pull off a big upset tonight when he shares the ring with unbeaten WBO welterweight champion Terence Crawford (34-0, 25 KOs) on ESPN pay-per-view in front of what is expected to be a large crowd at Madison Square Garden in New York.

It burns Khan up that he’s being counted out already by so many boxers, boxing fans and the odds-makers, who have him as a tremendous underdog despite him being an amazing talent.

Khan, 32, maintains that the people have forgotten all that he’s accomplished earlier in his career with him winning a silver medal in the 2004 Olympics and capturing two world titles at light welterweight. Khan wants to prove everyone wrong, and expose Crawford as not being as good as him. Khan says he’s not going to be playing it nice tonight when he gets the 31-year-old three division world champion Crawford into the ring.

“I’m not scared. This is my time,” Khan said to ESPN in talking about his fight tonight against Crawford. “I worked so hard for this. This is my moment now. I’ve got experience. I’m going to go in there and do what I do best. It’s time to switch on. It’s no more Mr. nice guy now. I have found it disrespectful at times,” Khan said about the many boxing fans and fighters that are giving him no chance of beating Crawford. “I think people are taking this fight off my last performance [against Samuel Vargas] I had, and maybe that’s the reason I got the fight. If I looked spectacular, I don’t think I would have gotten the fight,” said Khan.

Khan could be right about the boxing fans picking Crawford to win based on his last fight against Samuel Vargas (30-5-2, 14 KOs) last September. Khan was surprisingly knocked down in the second round by Vargas, who isn’t viewed as a big puncher by anyone. Vargas has a 38% KO percentage, which suggests that he’s not someone that has the kind of power to be knocking out the top level fighters. Khan was able to get up from the knockdown, and come back in the next round to drop Vargas in the third, and then dominate the remainder of the fight with his hand speed, movement and boxing skills. Khan won the fight by the scores 119-109, 118-110 and 119-108.

Khan looked really thin at the weigh-in last Friday. He made weight in coming in at 146 1/2 pounds, but he had the appearance of someone that had taken off a dramatic amount of weight. This writer hasn’t seen Khan this thin-looking since he was fighting at 140 seven years ago in 2012. Although Khan’s weight is higher than he was fighting light welterweight, his face looks thinner. He might have had to really struggle to take the weight off for this fight.

“I’ve still got that spectacular style in me,” Khan said. “I’ve still got the energy, the speed, the power, and everything it takes. I just needed a better dance partner. This is one of the best pound-for-pound fighters in the world. I’m going to be the best. You’re going to see the best Amir Khan. I would have never taken the fight if I didn’t feel it was the best me,” Khan said.

Khan looked exceptional at times in his last fight against Vargas. In his fight before that, Khan blew out Phil Lo Greco in the first round in April 2018. Khan hurt Lo Greco with a big right hand. If Khan can come out on fire tonight like he did against Lo Greco, Crawford won’t stand a chance. That might be the best way for Khan to win this fight, because if he let’s Crawford get his offense in gear, he’ll hit him with something big and likely take him out. Crawford doesn’t appear to hit as hard as past Khan destroyers Canelo Alvarez, Danny Garcia and Breidis Prescott, but he hits hard enough to knock him out if he hits him with a solid shot that he’s not prepared to take or if he can hit him with a lot of punches.

“I don’t care who I’m in the ring with. I achieved a lot early in my career,” said Khan. “People forget that. That’s why they have me so low numbers in the odds. This is my time to prove it now, and I’m going to prove it with my style, my speed and everything I have. I know what to do, and I’ve been here before and I’ve been in this position before. People can say what they want. I’m going to win, mark my words. You’ll see. I love being the underdog. Whenever I’m an underdog, I always prove my point, and I’m going to prove my point again. It’s my time,” Khan said.

If Khan can pull off the upset in this fight, it’s going to be a bitter pill for Crawford, his boxing fans, and most importantly his promoters at Top Rank to swallow. They’ve been trying to sell Crawford as being the #1 welterweight in the division, above Errol Spence Jr., Keith Thurman, Shawn Porter and Manny Pacquiao. Crawford losing to Khan would definitely put things in perspective, and make it clear that he was a product of careful match-making by his promoters at Top Rank all these years when he was winning. You can’t rule out a victory for Khan in this fight, because he’s got the pedigree, hand speed, movement, experience and the talent to do the job. Khan turned pro as a blue-chip fighter, who was rushed too quickly into tough fights against Breidis Precott, Marcos Maidana, Lamont Peterson and Danny Garcia in the early years of his career.

Khan is expected to use a hit and move style to keep Crawford from attacking him with his normal aggressive style. Crawford hasn’t dealt with that kind of a fighting style as a pro. It’ll be interesting to see how well Crawford handles it. He’s slow on his feet, and not as fast as he was earlier in his career when he was fighting at lightweight.