Friday’s historic sold out card in Dubai is one step closer as the fighters weighed in ahead of ‘The Fight – DXB Uncovered’ at Dubai’s Emirates Golf Club – live on ESPN+ and iFL TV.

David Oliver Joyce and Stephen Tiffney clash for the vacant WBO European belt, with both men clocking in comfortably inside the featherweight limit ahead of their title showdown.

There is also a battle for the vacant WBC International super-flyweight title tomorrow, as unbeaten Aliu Bamidele Lasisi takes on Ricardo Blandon.

Stephen Tiffney feels tonight’s bout with David Oliver Joyce has been years in the making as they prepare to meet on the historic ‘The Fight – DXB Uncovered’ sold out show at Dubai’s Emirates Golf Club – live on ESPN+ and iFL TV.

Tiffney (10-1) and Joyce (9-0) clash for the vacant WBO European featherweight title, and Scottish star Tiffney believes he has been on a collision course with his opponent for a while.

Tiffney said: “I definitely thought our paths would cross at some stage, so it’s good that it’s happening now and even better that a title is on the line.

“Joyce was campaigning at super-featherweight for a while and I was considering moving up, so if it happened I thought it would be in that weight class, but I’m glad it’s happening at featherweight because I feel a lot more comfortable here.

“It’s a brilliant bill to be fighting on as there are Olympians and other top stars competing as well. It’s massive that ESPN+ are covering it too, and it shows how big MTK Global are that they have the fighters to put these cards on.

“I’ve got a few family members over in Dubai for the fight, but it’s great that iFL TV are streaming it too, as it means that my fans back home won’t miss out.”

Olympic champion Shakhobidin Zoirov is plotting a swift route to world level as he prepares to make his professional debut in Dubai tonight.

The Rio 2016 king begins life as a pro on the huge #DXBUncovered card at Emirates Golf Club with the ESPN+ and iFL TV cameras rolling.

Fighters from no fewer than 19 nations compete on the night and Zoirov is glad to be relishing the prospect of opening his account in the paid ranks on a global stage.

‘Shakho’ said: “I’m so proud to be representing my country and MTK Global at this event, with boxing stars from all around the world. It’s going to be a special night.

“Boxing is spreading throughout the world and this is another big moment for the sport; it’s a new audience and we can inspire a new generation.

“This is just the start of a golden period for boxing in Uzbekistan, Dubai and around the world. I want to play a big role in that and I know with the team I have around me, this is possible.

“While I want to become a world champion as quickly as I can, the first thing I have to focus on is giving all the people watching an entertaining show on Friday.” 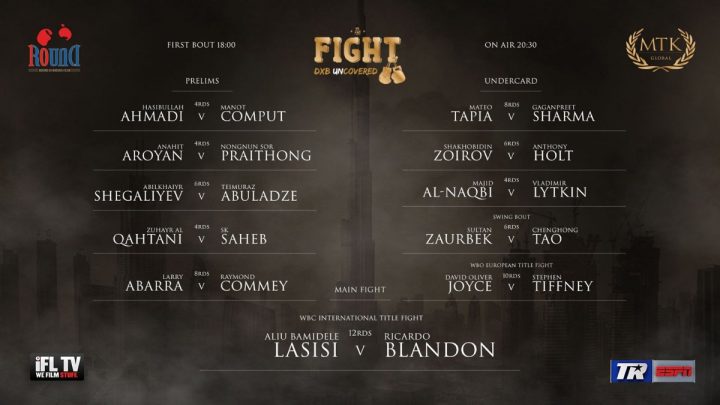 The Round 10 Boxing Club and MTK Global show – featuring two major title fights and broadcast live on ESPN+ and iFL TV – will take place in front of a packed house; much to the delight of organisers.

MTK Global President Bob Yalen told iFL TV: “This is unchartered territory in effect. There’s such potential. You plant a seed and you hopefully watch it grow.

“There are terrific venues here and you’ll see that the backdrop for Friday night is phenomenal. We hope the crowd enjoys it.

“If boxing takes, it’s a huge area of untapped potential – not just in terms of the fighters but in terms of various venues. You take your shot and you see what happens. We think this is the right shot!”

Top Rank Chief Operating Officer Bradley Jacobs added: “I think it’s terrific. We have a lot of experience about being in new territories. Bob and I started shows in Macau in China and we had no idea what it was going to be.

“It turned out, we wound up going to Macau and doing two Manny Pacquiao fights with 15,000 people in the arena at 8am! We expect no different here. This is a market that’s going to grow and I think grow quickly.”

Yalen said: “This is an important weekend for boxing in Dubai and for the entire region. This region has the potential to be the next breakout region for boxing, and we’re well positioned to represent the region and bring it to the forefront of boxing in the foreseeable future.

“We have a great fight card this weekend in a great venue. I’ve been in boxing and TV for 40 years now and have seen some beautiful things, and this has the chance to be right near the top. It should be a spectacular event.

“We’re all lucky to be associated with this, and we appreciate the efforts by Round 10 inw aht they’ve done not just for the event on Friday, but for boxing in the region. We’re looking forward to moving forward with them, and Friday is the first event in a long relationship.

“We’ve partnered with Top Rank and ESPN for a number of events over the next couple of years, and the event on ESPN+ on Friday has the potential for a worldwide audience. ESPN are the most powerful network in the world, and Top Rank is the premiere promoter of boxing worldwide.”

Top Rank COO Brad Jacobs is also delighted with the event, and is pleased that American audiences will get the chance to watch it on ESPN+.

Jacobs added: “We’re so happy to be here and thrilled to partner with MTK Global. Their tremendous roster of talent is second to none, and that’s proven by us being able to be here and with the event being televised live in the USA on ESPN+.

“This will be the first show of many over the course of several years, and we want to thank everyone involved. We’re looking forward to a terrific production and some great title fights, not only on Friday but moving forward throughout our continued relationship.”

Joyce – I want to be remembered

‘The Punisher’ (9-0-KO7) takes on MTK Global team-mate Stephen Tiffney (10-1-KO6) for the crown on an historic #DXBUncovered show at Dubai’s Emirates Golf Club – live on ESPN+ and iFL TV.

Mullingar’s Joyce is expecting a tough battle with the Scot but believes his superior class will see him through.

Joyce said: “My amateur record shows what I’ve got but I’m probably not as well-known as some featherweight guys who’ve been on Anthony Joshua undercards and the like.

“I’m going to make my name as a pro, though, just as I did as an amateur. I want to be a worldwide name. I want people to remember me and talk about Davey Oliver Joyce – the European champion, the world champion.

“I’m not looking past Tiffney at all. I’m focused on that night and that title. I’m not going to rush anything. I won’t say that once I’ve become European champion, I’ll be straight on to a world title shot. I’ll let my management team decide.

“I’m going to win this, maybe defend it a couple of times and then decide when the time is right. I believe I’ve got the ability and talent to beat any featherweight. I’ll show how good I am on April 5.

“This is the best camp I’ve had since turning professional. I’ve been living a clean life and I’ve had some phenomenal sparring. I had some amazing rounds with Michael Conlan over in England – around 50 or 60 rounds.

“I learned a lot from sparring with Mick and talking to his trainer Adam Booth. I enjoyed it and everything has gone as planned.”

Uzbek hero Shakhobidin Zoirov is set to end the long wait for his professional debut and delight Dubai on Friday night.

The 2016 Olympic champion kicks off his career in the paid ranks with high expectations as he faces Anthony Holt on the stacked #DXBUncovered show at Emirates Golf Club – live on ESPN+ and iFL TV.

Rather than feel under pressure, Zoirov welcomes the extra scrutiny that comes with being tagged as a blue chip prospect.

‘Shakho’ said: “As Olympic champion, I feel my role in events like this is extra important. Expectations are high but I plan to meet all of them and achieve my own goals too.

“I enjoyed my time as an amateur and will always look back on my achievements with pride but the time as come for me to start making noise in the professional game.

“It really doesn’t matter who is across from me in that ring on Friday or any other time. I have the confidence of being an Olympic champion and a great belief in my ability.

“I saw my great friend Hurshid Tojibaev make a his debut with a stoppage victory the other night and I hope to put on a show like that for the fans in Dubai.”

Despite being tipped as a superstar in the making, ruthless Kazakh Sultan Zaurbek is keeping a level head as he prepares for Friday’s assignment in Dubai – live on ESPN+ and iFL TV.

The Shymkent super-featherweight has blasted to 5-0-KO3 and has already thrilled Sky Sports viewers but is determined to retain his identity amid the hype.

As he prepares to fight in front of a packed house, Zaurbek said: “I’m very happy to receive praise from big promoters but I won’t let it change me as a person.

“No matter how much attention I get, I will stay humble and appreciate every opportunity that comes my way. I came here as Sultan and I’ll carry on being Sultan.

“My goal this year is simply to earn a chance at a title by the end of the year. I want to have a shot and that’s what I’m preparing and training for this year.

“I’m very thankful for my team and I appreciate all the help and guidance they give me. I also want to thank my friend in London who helps me communicate. We all have a great understanding even though there are language barriers at times.

“I want to thank my team for all their help and I’m now waiting to put on a great show in Dubai. The win is ours!”

Along with 22-year-old Zaurbek, other MTK Global stars including Davey Oliver Joyce and Stephen Tiffney, who do battle for the WBO European featherweight title, Olympic champion Shakhobidin Zoirov, Australia’s huge-hitting youngster Mateo Tapia and many more will be vying for limelight.

In addition, several products of the local Round 10 Boxing Club such as WBC International title-hunting Aliu Bamidele Lasisi and Filipino Larry Abarra will look to delight local fans.