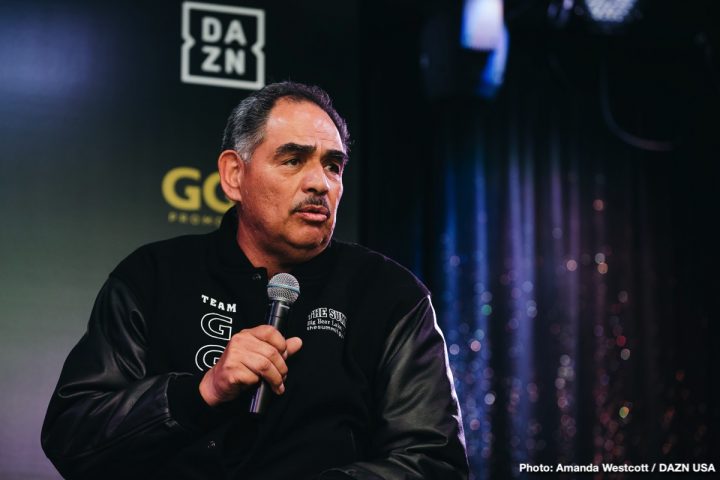 By Sean Jones: Jaime Munguia and Saul Canelo Alvarez are the options for Gennady Golovkin to fight in September, according to trainer Abel Sanchez. While it’s been known for a while now that Canelo (51-1-2, 35 KOs) is the Plan-A for Gennady (38-1-1, 34 KOs) to fight in September, it’s interesting to know that Sanchez that WBO junior middleweight champion Munguia (32-0, 26 KOs) is the Plan-B if no Canelo fight. There are a million reasons why Canelo and GGG might not fight each other in September.

One or both of them could get beat in their next fights, and that would necessitate them setting up rematches with that opponent. With Canelo fighting the highly talented, fast, powerful and big IBF middleweight champion Daniel Jacobs in his next fight on May 4, there’s a very good chance the short 5’8″ Mexican star could lose that fight. Canelo obviously isn’t going to move on if he loses to Jacobs without trying to avenge the loss.

“We want good fights because it helps us prepare for Canelo in September or if we fight Jaime Munguia,” Sanchez said to Villainfy Media. “We’re going to have to be on our P’s and Q’s in order to fight a Jaime Munguia or Canelo.”

Munguia (32-0, 26 KOs) mentioned possibly fighting Golovkin after he defends his WBO junior middleweight title against his mandatory challenger Dennis Hogan (28-1-1, 7 KOs) on April 13 on DAZN at the Arena Monterrey, in Monterrey, Mexico. Munguia, 22, says this could be his final fight at 154 before moving up to middleweight to take on Golovkin or Canelo Alvarez. With Canelo busy fighting Jacobs, it’s possible GGG could be the guy that Munguia fights. That would be a big fight between those two. It would be a fight where there would be no losers, because the interest in the fight would be so high. Both guys’ stock would rise fro the fight. Obviously, it wouldn’t be a good thing necessarily for the loser of the fight, but if they put in a good effort, they would lose boxing fans if it they fail to get the victory.

“I think the fans, media and boxing general want to see that fight, because they’re considered the top two middleweights in the world,” Sanchez said about Canelo vs. Golovkin III. “So if he’s success against Danny, and we’re successful in June, it’ll depend on the outcry. It’ll depend on how bad they want it. There are other good fights. It’s not about the belts. It’s more about putting on good fights,” Sanchez said.

Golovkin has a new philosophy when it comes to his opponents. It’s no longer about winning the belts. It’s more about putting together the best possible fights that interest the boxing fans. The world titles become useless once a fighter has attained a great popularity. In the beginning, when the fighter still hasn’t won over a large fan base, the world titles are important, because it validates the fighter in the eyes of the casual and hardcore boxing fans. But once the fighter is well known and highly respected by fans, then the fighter no longer needs to waste time being tied down to world titles and dealing with the various sanctioning bodies. Look at Floyd Mayweather Jr. as an example of that. He hasn’t needed world titles to get boxing fans to watch his fights. They want to see him fight because he’s so well known, and he has a reputation for entertaining.

Munguia would be a great option for GGG to fight in September if the Canelo trilogy fight doesn’t go down for Golovkin. Those two were supposed to fight last May, but the Nevada State Athletic Commission failed to sanction the fight due to Munguia lacking experience at middleweight, and experience in general to fight someone like GGG.