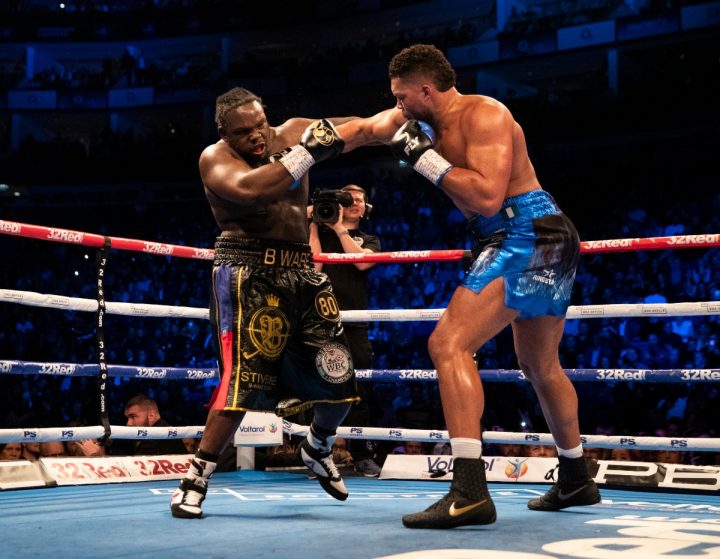 By Trevor McIntyre: Heavyweight contender Joe Joyce (8-0, 8 KOs) has parted ways with trainer Abel Sanchez, and is now back in London, England being trained by Adam Booth. It’s unclear what led to Joyce leaving Sanchez to join up with Booth, but it’s possible that he wants to focus more on his defense now.

Joyce didn’t last very long with Sanchez in training with him at altitude in beautiful Big Bear, California. The two were together for just three fights starting in 2018. Joyce beat Iago Kiladze, Joe Hanks and Bermane Stiverne under Sanchez’s watch. Joyce’s fighting style remained unchanged. He looked like the same fighter he’d always been, both as a pro and as an an amateur.

The only thing that changed for Joyce is his weight. he went from around 250 pounds to the low 260s. With the level of opposition Joyce has been facing being low, the weight difference didn’t seem to change his game much. The guys Joyce has been fighting lately are fighters he would have beaten at 250.

Joyce’s manager Sam Jones wants Eddie Hearn to know that he’s ready and willing to step in to face IBF/WBA/WBO heavyweight champion Anthony Joshua now that Jarrell “Big Baby” Miller has tested positive for a banned substance and is now out of the fight.

Sanchez is known for being a great trainer for teaching his fighters to be aggressive and go on the attack. The 6’6″ Joyce has always been that type of fighter. What he needs is to learn how get out of the way of shots. The 34-year-old Joyce was getting hit a lot in his last fight by former World Boxing Council heavyweight champion Bermane Stiverne last February at the O2 Arena in London. Joyce stopped the 40-year-old Stiverne in the sixth round.

By Tim Royner: Sanchez has a full plate, as the trainer for former middleweight champion Gennady Golovkin, and also training heavyweight Murat Gassiev. It might have been difficult for Joyce to get the attention that he needs with Sanchez juggling a lot of quality fighters. Joyce is still more of a project type of heavyweight.

Although he looks good, but he’s got to find a way to improve his defense, because he’s never going to have a lot of hand speed like other heavyweights. Right now, it’s not an issue for Joyce, but when he gets in there with the more talented heavyweights like Deontay Wilder and Anthony Joshua, it could be a problem.

Booth trained both David Haye and George Groves. He helped both of them use more movement. Joyce is capable of moving well in the ring for a big guy. He needs to work on his jab more, because he doesn’t use it enough. He tends to pressure his opponents much of the time. Joyce has a habit of throw arm punches, and this takes away from his power. If Sanchez wasn’t able to change that flaw in Joyce’s game, it’s unlikely Booth will be able to do much either in that regard.

Joyce is about to turn 34-years-old on September 19. That’s an advanced age for boxers. Usually a fighter already has his game set by that point in their careers, and they’re trying to maintain it as they age. Joyce is more of the opposite. He’s still trying to learn and improve to take his game to the next level so that he can compete against the likes of Joshua, Tyson Fury and Wilder.

Joyce is flying through trainers one after another. Whether he stays with Booth is going to be interesting to see. It’s a good thing for Joyce that he won’t have to travel as much for him to train, but if he ends up swapping out Booth without staying with for long, it’s almost pointless. This constant musical chairs that Joyce is playing in moving around from one trainer after another, looking for the magical guru that can improve his game enough for him to compete with the elite level fighters at heavyweight. In the meantime, Joyce is running out of time to make it big. He’s the same age Deontay Wilder, who has been a world champion for four years now.

Joyce should be taking advantage of Jarrell “Big Baby” Miller testing positive for a banned substance so that he can replace him against Joshua on June 1 at Madison Square Garden in New York. Joshua’s promoter Eddie Hearn ruled out using Joyce as a replacement for Miller. He doesn’t see Joyce as a contender yet. Hearn seemed negative to the idea of letting Joyce get a crack at Joshua. What was interesting was how Hearn revealed that he rates Manuel Charr ABOVE Joyce. Not too many boxing fans would agree with Hearn’s opinion. Charr hasn’t been very active since his fifth round knockout loss to Mairis Briedis in 2015. Charr has fought only three times in the last four years. His management was able to setup Charr with a fight against the 42-year-old Alexander Ustinov in November 2017 for the vacant World Boxing Association ‘regular’ heavyweight title. Charr hasn’t fought since then.

Booth might be able to make some inroads with the movement of Joyce, but he’s not going to be able to improve his hand speed. That problem is here to stay. The only thing Booth can do is try and have Joyce move more, and add head movement to avoid some of the shots that his opponents will be trying to hit him with. Stiverne was catching the 6’6″ Joyce cleanly when he was attacking him. Stiverne didn’t possess the youth and the conditioning to handle the fast pace that Joyce set in that fight. That was the difference.