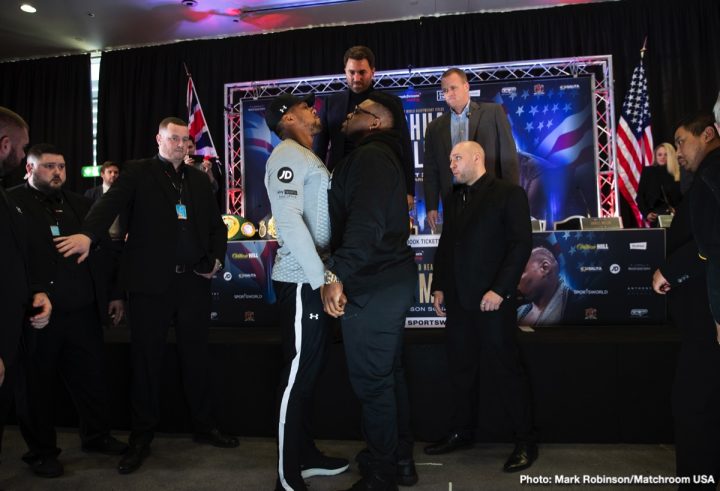 By Mike Smith: In disappointing news, the Anthony Joshua vs. Jarrell “Big Baby” Miller fight is now officially off for June 1 after the New York State Athletic Commission denied the boxing license for the 30-year-old “Big Baby” Miller following his failed drug test.

Joshua’s promoter Eddie Hearn was quick to say that they plan on keeping the June 1 date at Madison Square Garden in New York, and he’s actively looking for a suitable replacement to step in to take Miller’s place.

The unbeaten Miller (30-0-1, 23 KOs), who is known for being an outstanding volume punching capable of throwing nonstop shots for an entire fight, came up positive for the banned performance enhancing drug GW1516 during a VADA drug test conducted on March 20. Subsequently, the New York State Athletic Commission swiftly decided Miller’s case on Wednesday, rejecting his efforts to receive his boxing license in the State. Without a license, Miller is now officially out of the fight with Joshua.

Joshua’s promoter Eddie Hearn of Matchroom Boxing said this on his Twitter about Miller’s adverse finding for his March 20th drug test:

“We have been informed by VADA that there has been an adverse finding in Jarrell Miller’s sample collected on March 20, 2019. We are working with all relevant parties and will update with more details soon. AJ’s preparation continues for June 1 at MSG.”

Miller is looking a huge amount of money with him now out of the fight. Miller was set to make a mini-fortune of $4.865 in a guaranteed purse + a percentage of the profits for the fight. Additionally, Miller would have made $3 million from DAZN for two comeback fights if he lost to Joshua. All total, one can imagine miller would have made over $8 million.

Hearn mentioned Luis Ortiz as the fighter that Joshua would like to fight next. Hearn the quickly seemed to rule out Ortiz, saying that his team told him that they didn’t know if he could be ready for June 1. Hearn told IFL TV that he’s “100 percent” on board with Dillian Whyte stepping in to replace Miller, but he wonders whether he would be ready in time for the fight on June 1. Whyte is scheduled to fight on Sky Box Office on July 13 in the UK against a “good opponent.”

As you can see from the video, the 315 pound Miller had really transformed his physique in a short time in turning from the blubbery fighter that had faced off with Joshua in their kick off news conference last February to a fighter with a body that rivaled Joshua’s. Miller’s weight lifting, cheese burgers seemed to work wonders. Now we’ll never know what might have been unless he can work his way back into a title shot. Some boxing fans are going to see the video of Miller’s physique and think that he’s been using PEDs all along, and see that as the reason for his incredible ability to throw so many punches in his fights. Miller’s punch output is phenomenal for a heavyweight. Miller will have to prove to the boxing public in future fights that his volume punching isn’t because of him using anything. It’s because he’s blessed with a naturally great engine. Looking at Miller’s body now, you can tell he’s trained hard for the Joshua fight. It’s too bad that he won’t get the chance to show the fans what he can do. Joshua isn’t likely ever going to give Miller a second chance to fight him voluntarily. If Miller wants a fight with AJ in the future, he’ll need to go through a lot of good heavyweights to earn the shot. You can believe that the the promoters for Miller’s future opposition are going to insist that he agree to VADA testing in order to get the fight against them.

Hearn doesn’t have the opponent selected for Whyte, but he does have a five-fighter short list. Hearn would likely scrap that list and use Whyte as the replacement or Miller if he could get him to agree to take the fight. Whyte and Joshua would likely not make as much money fighting in the U.S than what they could make if they fight in the UK at Wembley Stadium in London. Once Whyte realizes how much more he could make fighting Joshua in the UK, he likely change his tune about wanting to fight him.

Here’s the five man list that Hearn put together for him to pick from for Joshua’s June 1 fight:

Ortiz is easily the best of the bunch, but he’s not one of Hearn’s fighters and he’s a southpaw with power. Hearn seemed to brighten up when Michael Hunter’s name was mentioned during an interview with IFL TV. Not only was Hearn smiling like the Cheshire cat, he was talking about how “tricky” Hunter would be for Joshua. Hearn might not realize that the average American has no clue who Hunter is. He might from the U.S, but he’s even more of an unknown that Miller. If Hearn uses Hunter, it’s going to do very little for the June 1. He might as well cancel it and wait until he can negotiate a fight with Deontay Wilder or Tyson Fury rather than take an opponent that the fans have interest in seeing.

Miller was a barely passable fight for Joshua. If Hearn goes lower than that by picking Hunter or Charr, it’s going to look bad. There wasn’t much buzz going on in the U.S with Joshua-Miller, other than around the East Coast. Having him out isn’t a big deal. It might be a big deal for Hearn, because he wanted him as Joshua’s opponent in the worst way. He picked Miller, and thought he was great. You can read that to mean that Hearn saw Miller as a guy that Joshua could beat and look good against. It could be a different story if Hearn uses Ortiz as a replacement, which is doubtful.

This is a good chance for Hearn to do the right thing by picking a talented heavyweight like Ortiz to face Joshua rather than selecting a soft job or someone from his own Matchroom Boxing stable like Dillian Whyte, Hunter or David Allen.