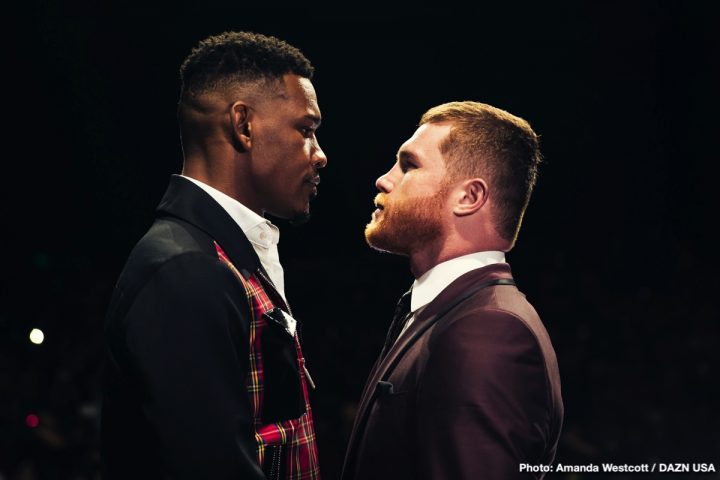 By Sean Jones: Jessie Vargas sees the Saul Canelo Alvarez vs Daniel Jacobs fight as one that could go either way when the two of them meet each other in a unification fight on May 4 on DAZN. Surprisingly, Vargas views Jacobs (35-2, 29 KOs) as the better boxer of the two, but he feels he’s going to need to keep Canelo Alvarez (51-1-2, 35 KOs) on the outside all night if he wants to get the victory.

WBA/WBC middleweight champion Canelo and IBF champion Jacobs will have all three of former IBF/WBA/WBC middleweight champion Gennady Golovkin’s titles on the line for this fight on May 4. Canelo beat GGG by a controversial 12 round majority decision last September to capture his belts at the T-Mobile Arena in Las Vegas. Jacobs picked up GGG’s vacant IBF title on October 27 last year in beating Sergiy Derevyanchenko by a 12 round split decision at Madison Square Garden in New York.

Golovkin was stripped of his International Boxing Federation middleweight title last summer on June 6 when he was unable to commit to defending the IBF belt against his mandatory challenger Derevyanchenko. The reason Golovkin couldn’t do that is because he was in negotiations for a big money rematch with Canelo. The IBF opted not to let Derevyanchenko wait for the smoke to clear from that fight, and that gave GGG not option but to sacrifice his IBF strap. As it turns out, Golovkin would have lost the belt anyway due to the way his second fight with Canelo was scored.

“Daniel Jacobs is a very talented boxer, and Canelo is more of a pressure fighter. He can also outbox his opponents, and try and look for the counter punch,” Jessie Vargas said to Fighthub in analyzing the Canelo vs. Jacobs fight on May 4. “In this fight out of the two, I see Jacobs being the better boxer. He needs to fight on the outside, fight on the inside, and try and maintain his distance. That’s the only way he can come out with the victory in this fight. But it’ not going to be easy, because Canelo is a power puncher, and he’s very experienced. So for that reason, I wouldn’t put my money on either guy, because it’s such a close fight,” Vargas said.

It would be wise for Jacobs to come into the fight with Canelo thinking knockout. Vargas’ advice for Jacobs to stay on the outside all night would be a good one normally if a fighter was counting on winning a 12 round decision, but that might not be doable. Canelo is a popular fighter and he’s going to be in Las Vegas at the T-Mobile where his last two fights in that venue where filled with controversy against GGG. If Jacobs thinks he can out-box Canelo and be given a decision the way that Floyd Mayweather Jr. did in 2013, he might wind up sadly mistaken on May 4. Jacobs staying on the outside will likely result in the fight being a close one, but it doesn’t guarantee victory for him. Jacobs is probably going to need to stand trade with Canelo to get the ‘W’ in this fight. That’s what a lot of boxing fans believe, and history has shown us that it’s realistic to assume that Canelo can be out-boxed when he’s fighting in that venue. A better strategy for Jacobs would be to go in there and flurry on Canelo with one punch after another from the start to finish using Aaron Pryor’s style of fighting. That style works against counter punchers, especially ones that have stamina problems like Canelo does. Jacobs could wear Canelo down if he unloads on him. In the Golovkin fight, Jacobs fought a lot better in the second half of the contest when he started to unload on him with shots. In the first half of the fight, Jacobs was fighting scared, and moving too much. The judges had no choice but to give those rounds to Golovkin Jacobs should learn that he can’t retreat against certain fighters and expect to win.

Vargas (28-2-2, 10 KOs) will be looking to pick up his first win in almost two years when he faces 38-year-old former two division world champion Humberto Soto (69-9-2, 37 KOs) on April 27 at the Forum in Inglewood, California. Vargas, 29, recently signed with Matchroom Boxing USA promoter Eddie Hearn in hopes of turning his sinking career around. Vargas will get a chance to do that soon if he can get past Soto, and that’s a big if because this is a more talented fighter than himself. The advantage that Vargas has over Soto is obvious. Soto’s best weight of his career was at super featherweight, and he’s much older than the 29-year-old Vargas. Soto will be turning 39-years-old in May. Last February, Soto pulled off a big upset in beating Matchroom Boxing USA fighter Brandon Rios by a 12 round unanimous decision in Tijuana, Mexico.

If Soto can do the same thing against Vargas, who is headed towards the junior middleweight division, it would be a big win. It would also likely make Eddie Hearn unhappy, because that would be the second fighter from his Matchroom stable that Humberto beat. Hearn is signing a lot of guys that clearly are flawed former belt holders. Although Rios is a former lightweight champion, he was never one of the best fighters in that weight class. Vargas is a former two division world champion, but he never beat any of the talented guys to win his two division world titles. Vargas captured the WBA light welterweight title in 2014 in beating Khabib Allakhverdiev in a very close fight. In 2016, Vargas moved up to welterweight and beat Sadam Ali to win the vacant World Boxing Organization 147 lb title.