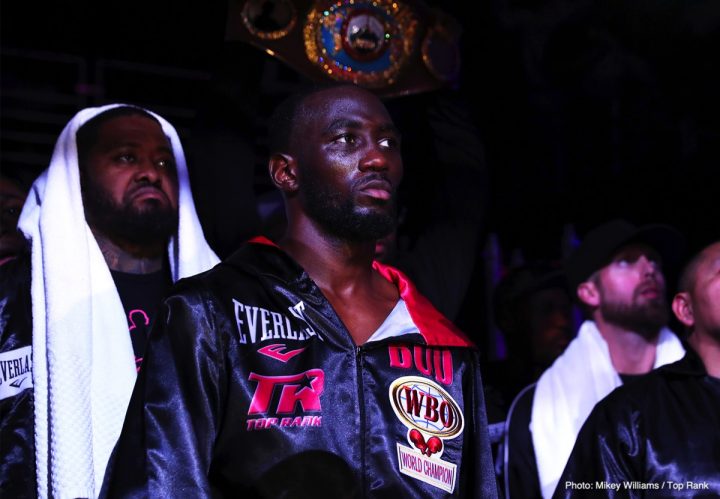 By Jeff Aranow: Bernard Hopkins says he’s leaning towards Terence Crawford to beat Errol Spence Jr. when the two eventually meet up in the near future for a unification fight at welterweight.

Hopkins has a lot of respect for both fighters, but right now he feels that WBO welterweight champion Crawford (34-0, 25 KOs) because of his experience. He has nine more fights than Spence at the pro level, and he feels that’s enough of an edge for him to pick him over Spence.

Crawford looks physically weak at 147, and not as dominating as he was when was beating the guys his promoters at Top Rank were putting in front of him when he was fighting at light welterweight. Crawford’s frame might be too weak for him to handle a bigger, stronger and younger Spence. This fight could turn out to be just like the Mikey Garcia fight in which Spence easily beats a fighter that doesn’t have the right frame for the welterweight division.

The fighters could wind up facing each other soon. Crawford’s promoter Bob Arum of Top Rank Boxing wants to make the fight with Spence as soon as Crawford defeats Amir Khan (33-4, 20 KOs) this month on April 20 on ESPN PPV at Madison Square Garden in New York.

“Errol Spence executed. He dissected the frog, and he did what he was supposed to do,” Hopkins said to Fighthub in giving Spence credit for his victory over Mikey Garcia. “To me, the surgeon [Spence] was at work at his best. You know what? Spence Spence is is just a technical guy. I mean, he must get his due for where he’s at in his career,” Hopkins said.

Hopkins predicted that Spence would beat Mikey by a close 12 round split decision, and that the fight would be close enough for a rematch needed for the two fighters. It didn’t turn out that was though. Hopkins’ prediction for the Spence-Garcia fight was way off.

Spence (25-0, 21 KOs) defeated Mikey Garcia (39-1, 30 KOs) by a 12 round unanimous on March 16 on Fox Sports PPV at AT&T Stadium in Arlington, Texas. A lot of professional boxers, and former fighters surprisingly picked Mikey to beat Spence. Many of the boxing public felt that Spence would win a close decision. They didn’t give Spence credit for having the ability to out-box the smaller Mikey. Spence proved a lot of people wrong by going out and not only beating Mikey, but doing it easily in a one-sided manner. The perceptions that people had about Spence’s boxing ability was off. They didn’t realize how good he was.

Hopkins isn’t giving the other top welterweights much credit. No one knows whether Spence is the #1 welterweight in the division, because he hasn’t faced anyone yet. He’s only had two fights at 147, and those were against Top Rank fighters Jose Benavidez Jr. and Jeff Horn. Those aren’t elite guys, and Crawford didn’t look good against Benavidez. He looked beatable. Shawn Porter, Danny Garcia, Keith Thurman and Manny Pacquiao would all give Crawford a lot of problems.

Hopkins seems to suggest that Crawford is number one at welterweight, but he’s still unproven as of now. Crawford’s experience against elite level fighters at 135, 140 and 147 is completely lacking. Crawford hasn’t fought the best at 140 and 147 for him to be considered the best fighter in those divisions. There’s a big question mark over Crawford’s head at both 140 and 147. How would Crawford do against these fighters: Regis Prograis, Josh Taylor, Maurice Hooker, Kiryl Relikh, Ivan Baranchyk, Danny Garcia, Shawn Porter, Keith Thurman, Manny Pacquiao, Josh Kelly, Jose Carlos Ramirez, and Yordenis Ugas?

“That fight to me on paper is really even,” Hopkins said in talking of the Spence vs. Crawford fight. But the experience, knowing experience can be key in that particular fight, I have to lean more towards Crawford to win a hard earned win, not an easy [win],” Hopkins said.

Crawford has experience, but against guys like Jeff Horn, Benavidez, Julius Indongo, John Molina Jr., Viktor Postol, Hank Lundy, Thomas Dulorme, Yuriorkis Gamboa and Dierry Jean. Spence’s pro experience is limited, but he a much better amateur career than Crawford, and fought in the Olympics. Crawford didn’t fight in the Olympics. With all the quality guy Spence fought in the amateurs, you have to say he’s got more experience than Crawford does.

Crawford, 31, needs to make sure he doesn’t come undone against Amir Khan (33-4, 20 KOs) this month, because if he loses that fight, he can forget about fighting Spence in the near future. Crawford would need to try and avenge his loss to Khan, and if he losses to him in the first fight, he could wind up losing the rematch as well. This is by no means and easy fight for Crawford, because he’s not a huge puncher, and he isn’t as fast as him. Khan could pull off an upset, which might not a true upset, because Crawford still hasn’t proven himself at welterweight. 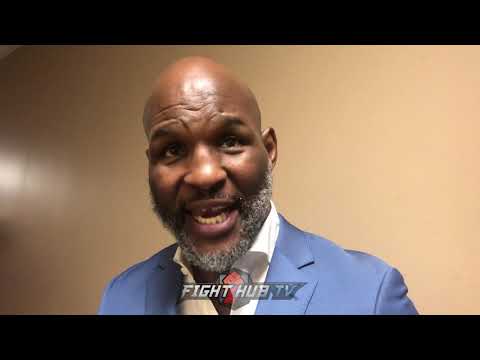 Jermall Charlo to face Brandon Adams on June 15 on SHOWTIME »