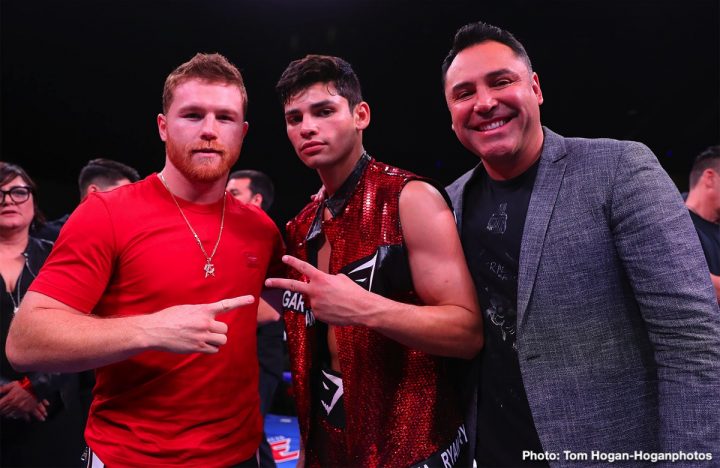 By Aragon Garcia: Golden Boy boss Oscar De Hoya is ecstatic about emergence of star power of lightweight Ryan Garcia, who will soon be giving his promotional company a one-two punch with the highly popular Saul Canelo Alvarez. up until now, De La Hoya didn’t have a popular enough prospect that could take the baton from WBA/WBC middleweight champion Alvarez (51-1-2, 35 KOs) when he retires perhaps in 10 years from now, but he does now in unbeaten Ryan Garcia (18-0, 15 KOs), who has future world champion written all over him and mega-star as well.

The 20-year-old Garcia obliterated his opponent Jose Lopez (20-4-1, 14 KOs) by a second round knockout last Saturday night on DAZN at the Fantasy Springs Casino, in Indio, California.

Canelo is getting ready for one of his biggest fights of his career against IBF middleweight champion Danny Jacobs (35-2, 29 KOs) on May 4 on DAZN at the T-Mobile Arena in Las Vegas, Nevada. This fight could be harder than Canelo’s recent fight against GGG, due to Jacobs’s height, reach, hand speed, mobility and boxing ability. Golovkin isn’t as big as Jacobs nor is he as fast or as mobile. It’s a tougher fight for Canelo on paper, and it could be a risky one if Jacobs starts unloading on him the way he did in his fights against Peter Quillin and Sergio Mora. Jacobs hasn’t fought like that in many years though. Jacobs is more of a careful fighter now compared to how he used to fight when he was looking to slug it out with his opponents.

“It’s coming up. We’re roughly a month away. I’m sure both camps are in high gear, training as hard as they can and sparring as hard as they can,” Oscar De La Hoya said to Villainfy Media about Canelo and Jacobs training for their May 4 fight. “I know Canelo has been sparring like a mad man with light heavyweights. Canelo is getting better. It’s incredible for a young man like him, who has over 50 fights, and still getting better. It’s really scary. It just keeps elevating your stock, your mental stock,” De La Hoya said.

For Canelo to achieve greatness, he needs to float between weight classes. If Canelo beats Jacobs and GGG a second time, then he should take on some of the super middleweights David Benavidez and Calum Smith, and then look to face WBO light heavyweight champion Sergey Kovalev. Those would be good fights for canelo.

“Ryan [Garcia] right now feels on top of the world. He still feels he has a lot to learn, and that’s what’s going to make him dangerous,” De La Hoya said about Ryan Garcia. “Every fighter out there, and every world champion out there is calling him out. Why? Because they know when he gets more experience, when he gets older, he’s going to be impossible to beat. So they want to try to beat him now. But look, we’re his promoter. We know what we’re doing. You take him easy. You take him slow. When we talk about a world title, we talk about it as a team, and then we all make it happen. I can assure you one thing, Ryan is going to fight the very best, just like Canelo is fighting the very best in the near future,” De La Hoya said.

It’s funny that top super featherweights like Gervonta ‘Tank’ Davis was showing interest in fighting Ryan Garcia after his win last Saturday night against Jose Lopez. When the champions are calling out contenders in the division above their weight class, it shows you how popular that fighter is. Ryan Garcia has a lot of different fighters wanting to mix it up with him. It’s no wonder that Garcia is already being refereed to as “The People’s champion.” When you’re as popular as Garcia is now, it puts you in the category as a world champion. Garcia might not technically be a belt holder with one of the sanctioning bodies, but with the fans, which is where it counts, he’s seen as a world champion and already well respected.

De La Hoya and Bernard Hopkins of Golden Boy both want to see Ryan fighting for a world title soon. They’re still not giving an indication when they’re going to let him loose on the lightweight or super featherweight divisions to go after the belt holders, but it could be soon. As far as Garcia’s next fight, he’s expected to be put in with a better fighter in a bump up before a world title fight. There are some good lightweights that would help prepare Ryan to fight the 135 lb champions Mikey Garcia and Vasyl Lomachenko. Jose Pedraza, Felix Verdejo, Robert Easter Jr., Devin Haney or Rances Barthelemy. It’s got to be someone like that to get Ryan ready for the next level.