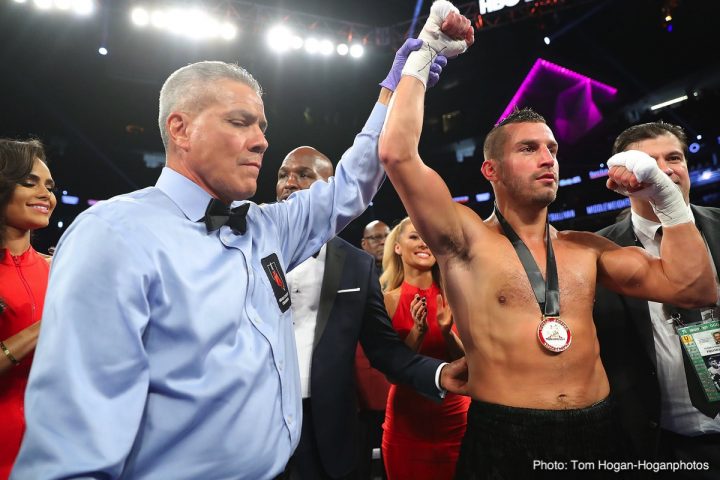 By Dan Ambrose: The Saul Canelo Alvarez vs. Daniel Jacobs DAZN card took a big hit on Wednesday with former IBF middleweight champion David Lemieux suffering a hand injury in training and pulling out of his scheduled fight against super middleweight contender John Ryder. The card will continue as before, but without the Lemieux-Ryder fight.

WBA/WBC middleweight champion Canelo Alvarez (51-1-2, 35 KOs) will be battling IBF champion Jacobs (35-2, 29 KOs) in an interesting headliner fight at the T-Mobile Arena in Las Vegas, Nevada. Lemieux would have been able to make a case for him fighting Canelo have stayed on the card and beaten Ryder.

In a news release sent out by Golden Boy on Wednesday, they reported that Lemieux suffered an injury to his right hand during a sparring session. He was told by a doctor to rest for the next two months before he starts training. There was no word about the Ryder vs. Lemieux fight being rescheduled.

Lemieux, 30, was set to make his debut at 168 against #1 WBA ranked Ryder in a fight that would have potentially put Lemieux in position to fight either WBA ‘regular’ super middleweight champion Saul Canelo Alvarez or WBA super World champion Callum Smith. Those are the type of fighters that Lemieux is going to need to prove he can beat if he wants to be a world champion in the 168 lb division. Some boxing fans speculate that Lemieux isn’t injured. They think he’s either having problems with cutting the weight to get near the 168 lb division.

Ryder isn’t a big puncher, but he’s a tough cookie, who makes it difficult on his opponents his aggressiveness. This would be a winnable fight for Lemieux if he were healthy, and more importantly if his weight was right. We just don’t know. Lemieux looks huge in between fights. It wouldn’t be surprising if he’s in the 190s right about now.

Lemieux is said to be unhappy with the injury, but he plans on returning to the ring soon.

“Training camp was going really great,” said Lemieux. “I felt in tremendous shape, the strongest I’d ever felt in my entire career. But, I will be back soon. Hopefully, the fans will understand. I promise I will make it up to them once I’m healed.”

Lemieux moving up in weight to a new division that has a lot of guys that are bad match-ups for him. Lemieux already lost to former WBO middleweight champion Billy Joe Saunders in a one-sided 12 round unanimous decision in December 2017. That was a horrible mismatch. Saunders literally embarrassed Lemieux with the way he out-boxed him, and showboated. The worst part about it was the fact that it took place in Lemieux’s home country of Canada.

Lemeiux has since won his last two fights, beating Karim Achour and Gary “Spike” O’Sullivan in impressive victories. Those guys aren’t major talented, and neither of them fight at super middleweight. At 168, Lemieux is going to need to show that he can handle tough fighters like David Benavidez, Caleb Plant, Caleb Truax, Saunders, Callum Smith, Chris Eubank Jr., Avni Yildirim, Fedor Chudinov, Peter Quillin, Jose Uzcategui and Juergen Braehmer. There are a lot of fighters in the super middleweight division that could give Lemieux all kinds of problems, and it’s unclear whether he’s going to be able to make something happen in this weight class unless his punching power is better in this division than it was at middleweight.

“It’s very unfortunate that David Lemieux’s return has been postponed,” said Eric Gomez, President of Golden Boy. “But this is boxing, and these things happen. We wish David a speedy recovery and look forward to his return, so he can make big waves at 168 pounds.”

It would be a good idea for Golden Boy Promotions to match Canelo against Lemieux before the Canadian fighter’s career goes to pieces at 168. Once he starts losing a lot, then there will be no point in Golden Boy ever putting those two in together. They’ll have missed their chance. It’s not too late. Canelo has his foot inside the door at super middleweight with him holding down the WBA ‘regular’ 168 lb title, and Lemieux ranked #5 with the WBA. The boxing fans wouldn’t complain if Golden Boy pulled the trigger on that fight in early 2020 or September if they don’t want to make the trilogy fight with Gennady Golovkin for whatever reason.

With that fight off the card, it leaves what light welterweight clash between uneaten Vergil Ortiz vs. Mauricio Herrera to be the new co-feature. That fight figures to be a gross mismatch, and not a fight that expects to be a competitive affair. Herrera is 38-years-old, and he’s not much of a puncher. Ortiz is expected to make easy work of Herrera. This would have been a decent fight eight or nine years ago when Herrera was younger, but not now. Herrera is too long in the tooth to make a fight of it. Ortiz should be fighting better opposition than this. Ortiz vs. Pablo Cesar Cano (32-7-1, 22 KOs) would be a great fight. Cano is fighting on the Canelo-Jacobs card on May 4 against Michael Perez. It would be better if Golden Boy switched the fights around by having Perez face Herrera, and Cano fight Ortiz. Those would be two good fights.


« Pulev & Kownacki ruled out for Joshua fight on June 1