Canelo: I beat GGG twice, it’s over. I want Kovalev 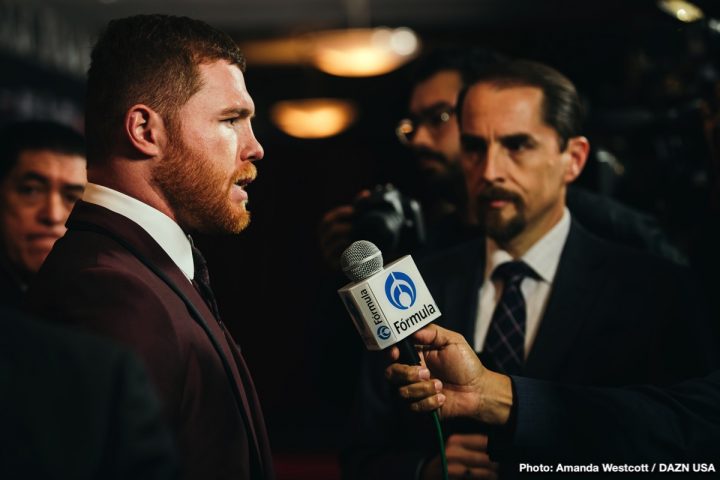 By Mark Eisner: As far as Saul Canelo Alvarez is concerned, he’s closed the chapter on his rivalry with Gennady Golovkin after beating him twice, and he now wants to move on to a potential fight against WBO light heavyweight champion Sergey Kovalev in the near future. Canelo (51-1-2, 35 KOs) has gotten the most mileage he can out of his fights with GGG, and the fan interest is no longer what it once was from the boxing public in seeing those two face each other.

This is about Canelo daring to be great. Fighting Kovalev would be a bigger deal for Canelo than it would be for him to fight GGG for a third time or go after WBO champion Demtrius Andrade to finish unifying the middleweight division. Canelo has made as much noise as he ever will in fighting Golovkin. It’s all downhill from here for Alvarez if he continues to fight GGG in retread matches that are no longer as interesting as they once were. Canelo can create a lot more buzz with his career by moving up to 175 to fight Kovalev. There’s no one at 168 that is popular enough for Canelo to fight in that weight class at the moment.

Kovalev (33-3-1, 28 KOs) is the new mountain that the Mexican star wants to climb. Canelo has a unification match coming up against IBF champion Daniel Jacobs (35-2, 29 KOs) on May 4 on DAZN, but that’s a fight he’s expected to win. Sticking around the middleweight division after that to possibly face WBO champion Demetrius Andrade is perhaps not worth it for Canelo. The fans aren’t interested in seeing Canelo fight Andrade, and it wouldn’t do much for his resume to put in effort at winning that final belt.

“It’s true. I don’t care [that he’s a big guy], I like it whenever there’s a risk or challenge for me,” Canelo said of fighting Kovalev.

Kovalev, 36, would be a huge fight for Canelo if he decides to move up to the weight class. There’s also WBA 175 lb champion Dmitry Bivol and IBF champion Artur Beterbiev. Both of those fighters would possibly tougher fights for Canelo than Kovalev, as they’re not flawed like he is in the chin and stamina department.

Canelo can’t wait too long for him to fight Kovalev, because the Russian fighter is getting older by the minute, and he may not be able to last long as the World Boxing Organization light heavyweight champion. Kovalev was knocked out in the seventh round by Eleider Alvarez on August 4, 2018 in Las Vegas, Nevada. Kovalev got a new trainer in Buddy McGirt, who has helped bring him back to his old style of fighting when he boxing and not looking to KO all of his opponents. Kovalev avenged his defeat against Eleider last February in beating him by a 12 round unanimous decision in Frisco, Texas.

Canelo had this to say about him being done with GGG and no longer interested in fighting him unless the fans want it:

“No, I beat him without a doubt. I don’t have any problem with that. I beat him twice so for me it’s over and that’s why I keep making these fights and keep making history but if there’s a possibility for a third fight because there aren’t better options, it will surely be another very good fight.”

For the record, Canelo beat GGG ONCE, not twice. The first fight between them in 2017 was scored a 12 round draw. A lot of boxing fans saw it as a robbery of Golovkin in a fight that some unusual scoring by the Nevada judges that were assigned to the contest. One judge gave Canelo the victory by a 10 rounds to 2 margin. Another judge gave Canelo the seventh round, which was considered by many to be Golvokin’s best round of the fight. But if Canelo feels he beat Golovkin twice, it’s understandable why he would feel like he’s done enough to move from the rivalry and look to accomplish other things with his career. Golovkin hasn’t helped keep the rivalry alive by not staying active since his loss to Canelo.

Now that GGG is about to fight again, it’s believed that he’s looking for a soft touch to fight instead of a tough opponent. To some fans, Golovkin is just looking for the payday against Canelo rather than him wanting to show that he’s trying to be the best. It’s similar to how former IBF welterweight champion Kell Brook has stopped fighting the best while waiting for a big payday fight against Amir Khan. By not facing the best, Brook has hurt his career, and taken away of the interest that would be there between him and Khan. Golovkin is going down that same street in fighting lesser guys, waiting for Canelo to give him a third fight. Canelo already sent GGG a message recently by saying that he would be interested in fighting him again if he wins a world title. Canelo wants Golovkin to take on WBO champion Demetrius Andrade. However, that doesn’t look like it’s going to happen. Golovkin’s promoter Tom Loeffler believes that he’s at the point where he no longer needs titles to create fan interest. But Canelo seems to have a different idea. If Canelo chooses not to fight Golovkin in September, then we’ll know that he was serious in saying that he would be interested in fighting him only if he has a belt.

“The objective of this year so to win all the belts,” Canelo said. “If Golovkin has a belt, then yes. Why not? We’ve given the fans two beautiful, great fights. Why not a third?”

It’s too late right now for Golovkin to get a fight against Andrade in time for June. Demetrius will be fighting on June 22 or 29th, but it’s likely going to be against his World Boxing Organization mandatory Maciej Sulecki. If Canelo doesn’t want to fight GGG again until he gets a world title, that fight will likely need to wait until 2020, because Andrade won’t be able to fight Golovkin until later this year after he defends against Sulecki in June. If Andrade isn’t available, then Golovkin should look to face Danny Jacobs or Jermall Charlo for his next fight.