Arum to demand Spence vs. Crawford fight gets made 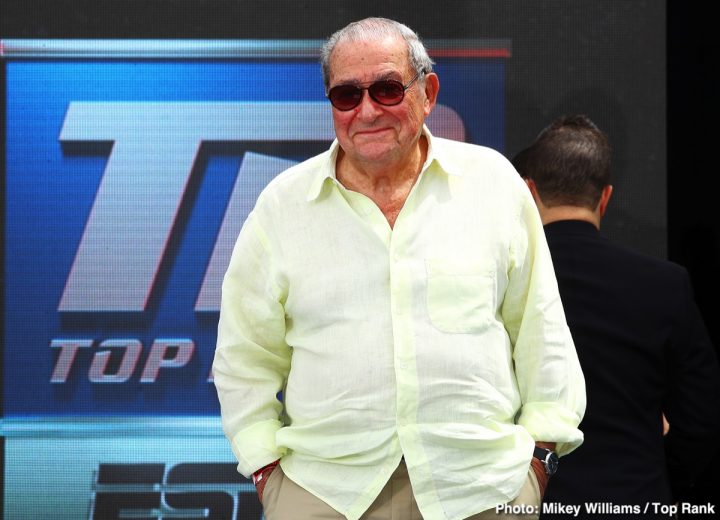 By Sean Jones: Promoter Bob Arum, sounding frustrated, reiterated on Thursday that he plans on contacting Errol Spence’s manager Al Haymon to put together the unification fight against Terence Crawford if he defeats Amir Khan on April 20. Arum says there’s only one person that stands in the way of him making the Spence-Crawford fight, and that’s Haymon.

The timing of Arum mentioning Spence for a fight against Crawford is conspicuous, with the promoter suddenly showing great interest in making that match right ahead of the Crawford-Khan contest next week on April 20. Some boxing fans may see the Spence-Crawford unification talk as a case of Arum trying to get fans interested in ordering the Crawford vs. Khan fight on ESPN PPV. In other words, if the fans believe that Crawford will be fighting Spence next, they’ll be more inclined to order the upcoming Crawford-Khan fight on pay-per-view. A lot of boxing fans aren’t interested in the Crawford vs. Khan fight, as they see it as a mismatch and a money grab. They don’t see it as PPV worthy fight.

Arum states that if Haymon blocks the Spence vs. Crawford fight from happening, then he thinks the fans should boycott Premier Boxing Champions fights. Crawford, 31, needs to try beating Amir Khan (33-4, 20 KOs) before Arum starts banging the drum for a fight between Spence and Terence. To be sure, Crawford could lose to Khan, and then Arum would look kind of silly.

Crawford is a good fighter, but he’s also been carefully matched by Top Rank all these years to have him arrive at his 34-0 record. The way that Top Rank is matching heavyweight Tyson Fury with little known German heavyweight Tom Schwarz is how Crawford has been matched for his entire career. The casual boxing fans lack the knowledge of the sport to realize when a fighter has been spoon-fed pablum for opposition to make them look better than they actually are.

“You’ve got to consider the fans. What is the best welterweight fight that anybody could put together?” Arum said to Fighthype about his interest in putting together the Spence vs. Crawford fight. “Clearly Crawford and Spence in the days when [Sugar Ray] Leonard and [Tommy] Hearns were fighting, when [Robert] Duran was fighting, you always matched the best against the best. It’s a massive fight. It’s a fight Terence wants. It’s a fight Errol Spence. If the promoters stop the fight, they aught to be ashamed of themselves, plain and simple,” said Arum.

It’s not just about the boxing fans. It’s about the need to negotiate the Spence vs. Crawford fight to where it makes sense for both fighters. Spence, 29, isn’t going to agree to the fight with Crawford if the money isn’t right, and vice versa. Trying to negotiate a fight between Spence and Crawford is going to be a heck of a lot harder than it was for Arum to put the Crawford-Khan fight together.

“Forget the arithmetic. Give the fans what they want,” Arum said. “Don’t put Spence in with the non-elite fighters. Unless I’m forced to, I won’t put Crawford back in with the non-elite fighters that don’t measure up and aren’t elite. Could I do it, yeah, but I’d rather not, because I’d rather see both of these guys fight each other at the peak of their careers,” Arum said.

It’s a bad time for Arum to be talking about the Spence vs. Crawford fight. Spence vs. WBC welterweight champion Shawn Porter is expected to take place in September on Fox Sports. If anything, it would be better for Arum to wait until the Spence-Porter fight gets done before he starts talking up a fight between Crawford and Spence. Moreover, Crawford has a tough fight on his hands with Khan, and he could lose to him.

Crawford looks slow now that he’s moved up to welterweight, and he’s not looking like the same fighter he was when he was at 140, even with Arum continuing to match him soft against his Top Rank stable fighters Jose Benavidez Jr. and Jeff Horn. Crawford looks like a decent welterweight, but not elite. He looks like a fighter that does a lot of energy wasting moves by switching stances, and moving around the ring. In terms of actual fighting, Crawford hasn’t looked impressive at welterweight against the two beatable fighters – Benavidez and Horn – that Arum put him in with. Those would be beaten by a lot of the other welterweights in the division.

“The problem was Al Haymon, and the only reason Pacquiao and Mayweather ended up getting done is because Les Moonves was the head of CBS, told Haymon that unless he did that fight, he had no more dates on Showtime, really,” Arum said. “There’s nobody to tell Haymon that except the public. I think the terms will be easy. The networks can do it together, whether it’s Fox with them or ESPN with us. It would be massive. If he doesn’t do it, then people should boycott PBC fights. Of course, [it has to be a joint broadcast], just the way a couple of years ago Mayweather and Pacquiao was a joint production of HBO and Showtime,” Arum said.

Arum is right about the Spence vs. Crawford fight being a big one. There’s no question that it would be a big fight if they can get it done. But the timing isn’t right for it to get made right now. Spence has too many other interesting fights available to him, and Crawford isn’t popular as he should be for the fight to make sense. Mikey Garcia is arguably a more popular fighter than Crawford. Spence-Garcia brought in around 400,000 buys on Fox Sports PPV. If Spence fights Crawford right now instead of waiting, the fight will likely bring in far fewer buys than the Spence vs. Garcia fight. For that reason, Spence would be better off waiting a few years for the fight with Crawford to get bigger before he makes that match.

“There’s no problem with the money in the pot,” Arum said. “Fighters can get guarantees, and then if takes off like Mayweather and Pacquiao did, the guarantees become meaningless, but they share in the percentages. All I’m saying is we want to do the fight,” Arum said.

Spence would be helping Crawford out by giving him a fight right now rather than the other way around. There’s not enough for Spence to gain in fighting Crawford for him to take that right at this time. Maybe later, but not now. Once Spence has the IBF, WBA and WBC welterweight titles in his possession, then it makes sense for him to look Crawford’s way for a unification fight with all the 147 lb titles on the line. There’s a very good chance Crawford loses long before he gets the Spence fight, possibly against Khan. When you’ve been matched as softly as Crawford has entire career, there’s no guarantees he gets passed a skilled fighter like Khan. Crawford is the type of fighter that Khan does well against.

“All I’m saying is Terence Crawford wants to do the fight if he’s successful against Amir Khan,” Arum continued. “Based on my conversations with Errol Spence, he wants to do the fight. So if that fight doesn’t happen, it’s one guy and one guy alone and that’s Haymon. I have his number. I hope he didn’t change it. I will call him Tuesday or Wednesday after that fight [Crawford vs. Khan]. I want to do it in September or whatever makes most sense. It should be the next fight for both guys,” Arum said.

It’s Haymon that will make the decision whether to match Spence with Crawford. Nevertheless, with all the options Spence has in front of him for big fights at 147, he hardly needs a fight with Crawford right now. Maybe in three of four years, the fight will be ready to be put together after Spence exhausts all the fights available to him with Haymon’s stable of Premier Boxing Champions fighters. By that point, Crawford might not be a world champion any longer. He’s 31 now, and looking slower, and older than than was in the past. 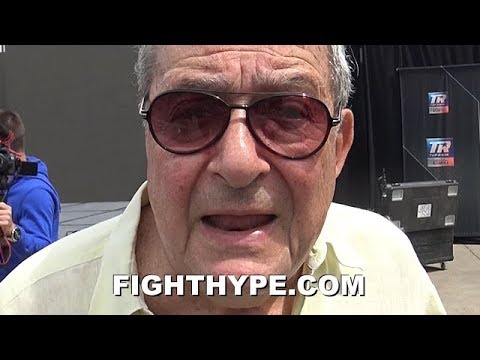 
« Crawford vs. Khan: Khan is a fighter in decline that needs saving from himself