Allen vs. Browne & Chisora vs. Gashi tonight on DAZN 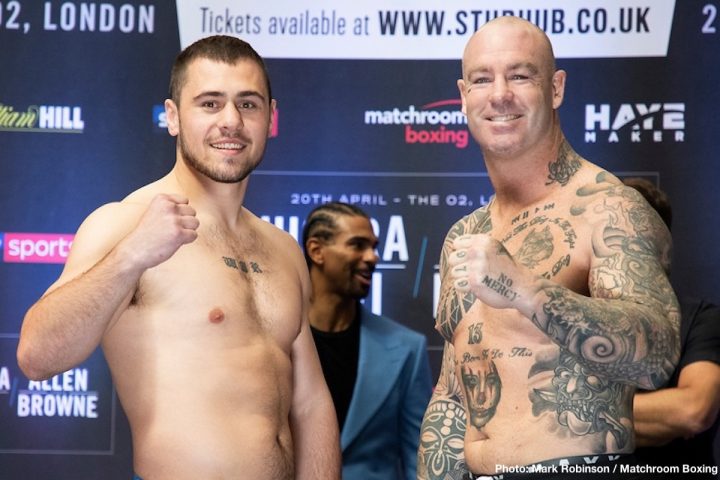 By far the most interesting match on the card tonight is the fight between former WBA ‘regular’ heavyweight champion “Big Daddy” Browne and the “White Rhino” Allen. Promoted by Eddie Hearn of Matchroom Sport, Allen, 26, can put himself in the mix for some intriguing fights if he can beat the 40-year-old Australian Browne tonight.

Allen has turned his career around entirely since suffering devastating losses to Tony Yoka and Lenroy Thomas. Allen has won his last three fights and looked good. It’s debatable whether he’s improved substantially since those defeats, because he hasn’t faced anyone good yet.

Browne is coming into the fight with Allen on the back of a three-fight winning streak. However, in Browne’s last fight, he got lucky in beating journeyman Kamil Sokolowski by a questionable six round referee’s decision on March 2 at the Trump Turnberry, in Turnberry. The referee scored it for Browne by a 57-56, but it looked like he’d lost every round of the fight. Browne was shockingly dropped by a big left hook from Sokolowski in the second, and from there it continued to go badly for the very slow looking Browne. The fans were in shock after the contest was over when Browne was announced as the winner. There was spatter of boos, but mostly silence. The fans clearly as saw Browne losing that fight.

Allen should win this fight without any problems. Although Browne is a former WBA heavyweight world champion, he’s slowed since beating Ruslan Chagaev by an upset 10th round knockout in March 2016 in Grozny, Russia. Allen’s hand speed, which was never good to begin with, has disappeared, and he’s so slow that it makes it difficult for him to land his power shots without getting easily countered by his opposition. Browne was stopped in the sixth round by Dillian Whyte in March of last year at the O2 Arena in London, England. Browne looked terrible, and made Whyte look like a superstar in comparison. Whyte wasn’t anything special in the fight, but Browne was so slow, so hittable and so over-matched. Now it’s Allen’s turn to get into the act in fighting the past his best Browne, and the outcome is predictable. Unless Browne is able to land one of his slow power shots, Allen should be able to win this fight with flying colors.

“If it’s working, fantastic, we’ll stick to it, if not, I’m going to ‘Homer Simpson’ him,” Allen said to skysports.com about “Big Daddy” Browne.

There’s a big difference in age between the two heavyweights. Allen is young 26 going into a match against the 40-year-old Browne. While some fighters look young at 40, Browne isn’t one of them. He looks more like someone in their late 50s, and that’s going to be a problem tonight when he starts mixing it up with the ambitious Allen.

Hearn hasn’t given any hints what he has in store for Allen if he whips Browne tonight, but you can bet that it’ll be someone along the lines of David Price, Chisora, Murat Gassiev or Zhilei Zhang. More likely it’ll be Price. Gassiev, Chisora and Zhang are too much of a step up for Allen from the likes of Browne. Yeah, Browne is a former WBA heavyweight champion, but he’s not on the level as those guys right now. You’ve got to give Browne massive credit or being able to put it together to pull off a big upset over Ruslan Chagaev in 2016, but he caught the Russian fighter at the end of his career. Chagaev wasn’t the same fighter at that point in his career that he’d been years earlier when he’d beaten John Ruiz and Nikolay Valuev.

“Two great guys, two very good heavyweights at a stage in their career where quite frankly they must win to go onto the madness of the heavyweight division, those big fights,” promoter Eddie Hearn said to skysports.com.

Hearn doesn’t elaborate about what type of “big fights” are available to the winner of the Allen vs. Browne fight. He can’t be talking about putting one of them in with Anthony Joshua for a world title. Allen was already beaten by Dillian Whyte by a one-sided 10 round unanimous decision in 2016. There’s no point in Hearn putting Whyte and Allen back in together in a retread fight at this point. If Allen is successful tonight in beating Big Daddy Browne, it’s more likely that Hearn will use him as an opponent for one of his lions Gassiev, Zhang or Filip Hrgovic. It’s doubtful that Allen would do well against any of those guys. There are levels in boxing, and Allen hasn’t shown the kind of talent to beat those type of fighters. Gassiev is a former IBF/WBA cruiserweight champion, and Zhang and Hrgovic are past Olympians. 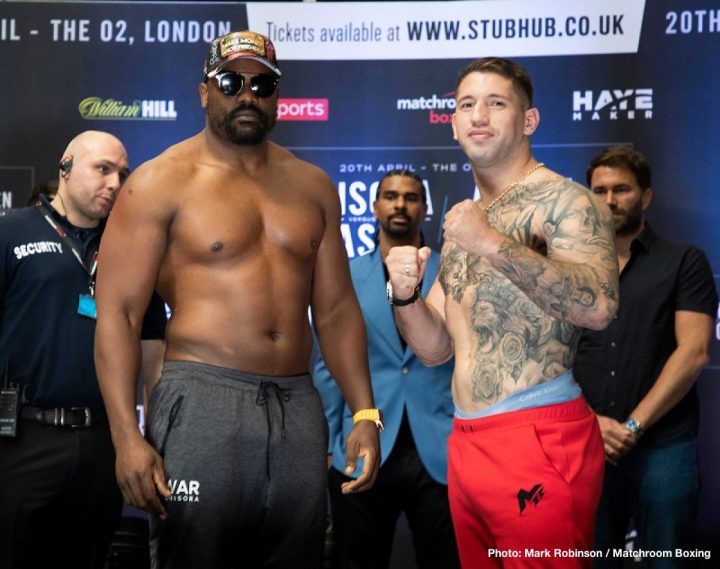 Chisora and Gashi will be battling it out in a fight between two recently knocked out fighters. Chisora, 35, is coming off of an 11th round knockout loss to Dilian Whyte last December in London, England. Gashi, 29, was knocked out in the seventh round by Carlos Takam on December 22 on the undercard of the Whyte vs. Chisora fight. It’s interesting that Chisora agreed to fight Gashi rather than someone one doing a little better with their careers. It’s got to be more than a little hard for Chisora to get excited about fighting a guy that was knocked out in his last fight by Takam, a fighter that he stopped in the eighth round last July at the O2 Arena.

It’s got to be tough for Chisora to be fully focused on this fight because there’s no upside for it. If Chisora wins, no one will care. If he loses, then it game over for him. He might as well retire. Of course, Chisora probably WON’T retire if he gets beaten by Gashi, because his boxing career is his job, and Matchroom will continue to be able to use him for fights against their other heavyweights like Price, Allen, Gassiev, Zhang and Whyte. Chisora has become a high level journeyman at this point in his career, so it won’t be the end of the world if the much younger Gashi knocks him out or out-boxes him the way the younger fighter Agit Kabayel did two years ago in beating him by a 12 round majority decision in November 2017.