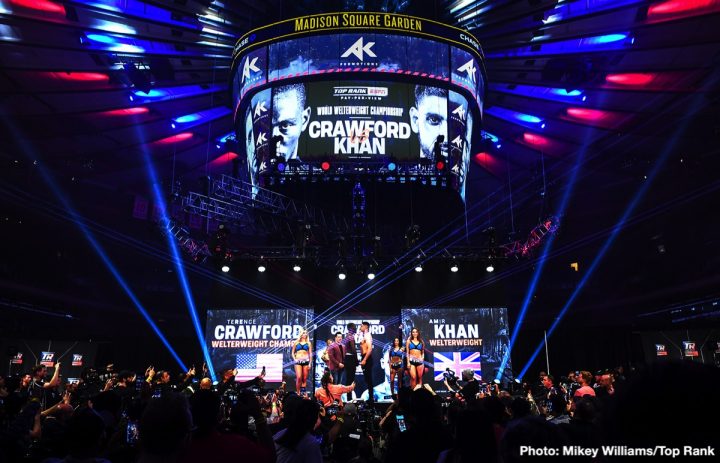 Unfortunately, with the other elite welterweights fighting on another network with Premier Boxing Champions on Fox and SHOWTIME, Crawford is in a tough spot when it comes to getting elite level opposition to face him. Hence, Crawford is defending against Khan, 32, tonight in a match that some boxing fans are unhappy with and view as a non-competitive fight.

Kellerman sees the Crawford-Khan fight as one out of necessity. Crawford doesn’t have a lot of great options for fan-pleasing fights, which is why Khan has been selected to fight him instead of the likes Errol Spence Jr. Shawn Porter, Manny Pacquiao, Danny Garcia and Keith Thurman. Khan was considered the best 140 pound fighter in the division a decade ago, and the big money fighter. He still brings a lot to the table due to his popularity with older boxing fans that were following the sport eight to ten years ago that remember Khan during his heyday between 2008 and 2011.

“This was the biggest event that could be made given the promotional and network ties,” Kellerman said to IFL TV about the Crawford vs. Khan fight. “The rest of the welterweight division, the top of it, is over on another network with another promoter or adviser. So, Terence Crawford, widely considered the best 147 pounder in the world or the best or the best fighter fighting at 147 pounds, one of the best pound-for-pound fighters in the world, #1 on my list. They need to get him a credible opponent with some drawing power,” Kellerman said.

Khan is by far the biggest name that Crawford’s promoters at Top Rank Boxing could find for him right now. That could change after tonight, however. A great performance by the Nebraska native Crawford tonight against Khan on ESPN PPV, could open doors to bigger fights against the PBC elite welterweights. With that said, Crawford could permanently scare the top welterweights away if he looks too good. It’s a fine line that Crawford will be walking tonight in his title defense against Khan.

If Crawford looks bad, he’ll lose boxing fans, who will come out of the woodwork to point out that he was always matched against less than the best opposition during his career, which you can argue is absolutely true. Crawford hasn’t the elite in any of the weight classes he’s fought at. If Crawford destroys Khan in the early going in the fight or if he boxes circles around him in winning a one-sided decision, welterweights like Danny Garcia, Thurman, Shawn Porter, Pacquiao, Adrien Granados and Spence probably aren’t going to want to fight him. Crawford will need to look good, but not too good in beating Khan.

What could help Crawford get the bigger names to fight him is if his match against Khan brings in a massive amount of pay-per-view buys on ESPN PPV. It’s not expected to unfortunately, but there’s a chance the Crawford-Khan fight could bring in 400,000 buys. That would be a successful fight in terms of revenue. In Crawford’s only other fight on PPV against Viktor Postol in 2016, it brought in a lowly 50,000 buys on HBO. If Crawford-Khan winds up with that amount of buys on ESPN PPV tonight, it’ll hurt Crawford and Top Rank’s case to try and lure the other fighters in the welterweight division to come over to ESPN to fight him. Top Rank can always throw huge money at them, and it’s possible that they could get one or two the way they were able to lure Khan into taking the fight by giving him a $5 million offer.

“Amir Khan, the same reason I thought Canelo would fight GGG eventually, because Canelo fights everybody, even though he’s the money man,” Kellerman said. “Amir Khan, he has money on the table to fight Kell Brook, but takes this, because that’s the kind of kid he’s always been. Amir Khan, when he was the money man at 140, the assumption was, they’d navigate him carefully, but they didn’t do that. He fought everybody. He was willing to fight Tim Bradley at one point. Every time he’s moved up, he’s never said no to fights. He’s always willing to fight everybody, so the fight got made,” Kellerman said.

The 2004 Olympic silver medalist Khan is still popular in the UK, and he can make money from his fights on Sky Box Office pay-per-view. The money that Khan can still make from his British boxing fans is likely one of the major factors why Top Rank elected to match Crawford against him. There was money to be made for Top Rank and Crawford in fighting Khan. It also doesn’t hurt that Khan is someone that Crawford has a good chance of beating due to his chin problem. Khan has been knocked out 3 times in his 14-year pro career to Breidis Prescott, Danny Garcia and Saul Canelo Alvarez. There’s a good chance that Crawford could stop Khan as well in this fight. Khan getting stopped by those fighters doesn’t mean that he can’t take a punch. Crawford would have likely been knocked out too if he were hit with the kinds of shots that Canelo, Prescott and Garcia hit Khan with.