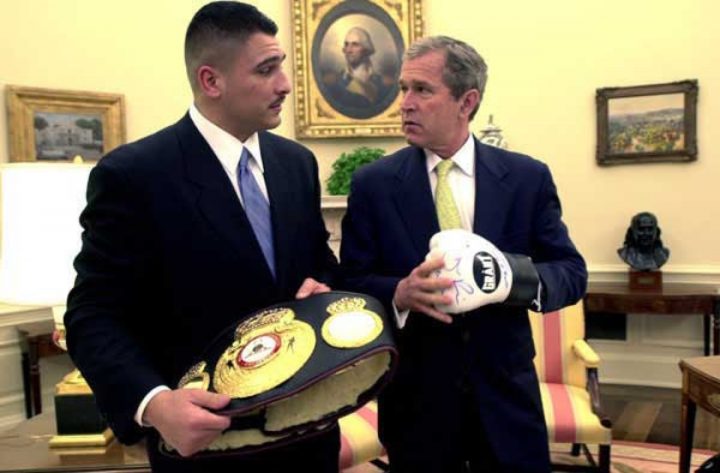 From the projects to owning arguably the most respected individual title in sports, John “The Quietman” Ruiz remains the only Latino to capture the coveted world heavyweight title.

Ruiz, 47, is a proud Puerto-Rican American boxer who grew-up in a Chelsea, Massachusetts. The two-time World Boxing Association (WBA) heavyweight champion, defeated USA Boxing Alumni Association Hall of Famer Evander Holyfield in the second of their three title fights, to secure for the first time, the world heavyweight crown.

A decorated amateur boxer, Ruiz compiled a 50-5 record, similar to his final pro record of 44-9-1 (30 KOs) between 1992-2010, including gold- medal performances at the All-New England Championships, USA Boxing National Championships and the Los Angeles Olympic Festival, which elevated him to the No. 1 light heavyweight position in the United States ratings.

Ruiz was also an outstanding all-around athlete at Chelsea High, particularly in football, in which he was an all-star. He started boxing at the age of seven, eventually developing his skills at the Somerville Boxing Club.

“Boxing was the only sport I figured I’d have a good chance of succeeding,” Ruiz (pictured here on far left) explained why he pursued boxing as opposed to football or another team sport. “The other sports you had to go to college, and I didn’t have the grades.”

Ruiz never looked back and no boxer ever got more out of their God-given skills than him. After winning his first tournament (PAL in New Jersey), he became part of the USA Team that traveled to Sweden to compete in a dual-meet.

“Outside of Puerto Rico (he lived there for 6-7 years in his early youth),” Ruiz remembered fondly. “I had never traveled outside of the United States. USA Boxing gave me an opportunity to travel there, Australia, Italy and all over the United States. Even more than how those experiences prepared me for the pro ranks, it gave me a taste of life experience, traveling to places I never would have been able to go to on my own. Amateur boxing also gave me structure and confidence in myself for when I turned pro. I also met so many different people, fighters and coaches, from all over the world.”

In addition to his aforementioned victory at the Los Angles Olympic Festival, which qualified him as a Team USA member to compete in the World Championships in Australia (finished 6th in the world), perhaps the highlight of his amateur career was defeating Torsten May, the 1992 Olympic gold medal winner from Germany, at a dual meet in Florida.

“My association with John goes back to 1990,” added Al Valenti, USA Boxing Special Projects Consultant. “I was thrilled that a local kid was honing his skills in the boxing ring. John made an incredible impact on the National Amateur boxing scene in the early nineties; making it all the way to the Olympic Trials in Worcester (MA). Having been involved in the trials was extra special for me because John was such a great competitor and good kid. Boxing history will have a place for John Ruiz, not many survived 36 rounds with Evander. Being the first Latino World Heavyweight Champion was quite an accomplishment for “The Quietman”.

History was made March 3, 2013 in Las Vegas, when he became only the second fighter to drop Holyfield en route to his WBA title-winning fight by way of a 12-round unanimous decision, earning him instant notoriety as the first Latino to hold the coveted world heavyweight title belt.

“I’m very proud to have accomplished that,” he continued, “but my main goal was to provide for my family and I always maintained that goal. Most fighters don’t succeed, but at the end of the day, that’s what pushed me. I don’t really think about being the only Latino to win the world heavyweight title, but, when I hear people talk about it today, I think, wow, I’m still the only Latino to do that.”

Several years ago, Ruiz opened a gym (Quietman Sports Gym) in Medford, MA, not too far from where he grew up in Chelsea and trained in Somerville. It has been a registered club member by USA Boxing since 2012, but, more importantly, it’s Ruiz’ way of giving back to amateur boxing.

“I felt there was a need to help more kids and give them an opportunity to get out of the house and do something productive and fun,” Ruiz commented. “They all have a chance to work on self confidence and one could possibly become world champion. I feel obligated to help kids because I remember years ago when I was in the same position. They need guidance. If I didn’t have all the support I did growing up, I wouldn’t have turned out the way I did. I want to help kids understand how to accomplishment their goals.”

NEWS:   Franklin vs Shaw Live on NBCSN on April 22

“Winning the world title twice as a pro was awesome,” Ruiz concluded, “but I definitely enjoyed the amateurs more than the pros, even though I would have loved to have represented the USA in the Olympics. USA Boxing opened up my mind to different things, taking me off the streets of Chelsea to made me feel……special.”

Created to champion a lifelong, mutually beneficial relations between USA Boxing and its alumni, –boxers, officials, coaches and boxing fans — The Alumni Association connects generations of champions, inspiring and giving back to USA Boxing’s future boxing champions, in and out of the ring.

To join the Alumni Association, simply register at alumni@usaboxing.org for a $40.00 per year membership fee. New members will receive a T-shirt, keychain and e-wallet.