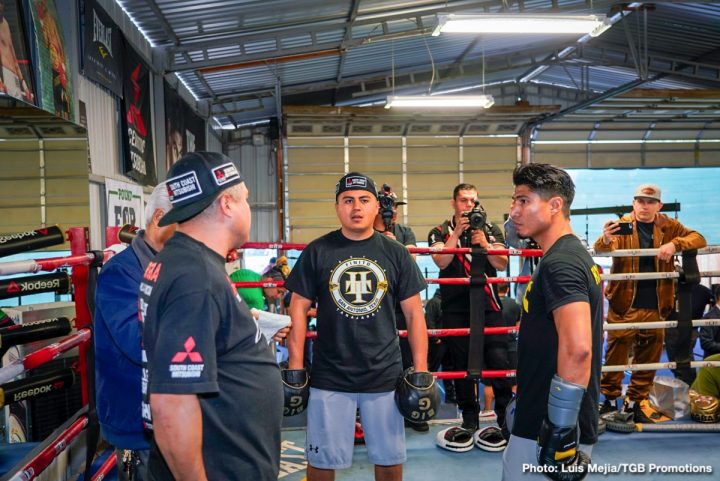 By Dan Ambrose: Former two division world champion Bernard Hopkins thinks IBF welterweight champion Errol Spence Jr. will have his hands full against Mikey Garcia on Saturday night, and he sees this fight as one that Errol could lose. Although Hopkins is predicting a 12 round split decision win for Spence, he feels it’s going to be a really hard fight for him.

Spence and Garcia will be battling it out this Saturday night on March 16 on Fox Sports pay-per-view at AT&T Stadium in Arlington, Texas.

Hopkins compares what WBC lightweight champion Mikey Garcia is attempting to do in moving up two weight classes to what he did in 1996 when he moved up two divisions from middleweight to light heavyweight to defeat International Boxing Federation 175 lb champion Antonio Tarver by a 12 round unanimous decision to become a world champion in that weight class. Hopkins says that his skills enabled him to get the better of Tarver. However, there’s still a huge difference in where Spence is now compared to Tarver was when Hopkins beat him.

“It’s very close, and I think they’ll do it again, but I believe Spence wins this one by split decision,” Hopkins said to RingTV.com. “Anybody who thinks this is going to be an easy fight for Spence, they’re wrong, and I’ll be the first one to say, ‘Told you so!’ … Garcia has all of the tools to beat, not upset, beat Errol Spence,” Hopkins said.

Mikey didn’t look good against Sergey Lipinets, and he was pulled out of his fight against his toughest opponent in Orlando Salido in 2013. Salido is the toughest guy Mikey has fought during his career, and his trainer Robert Garcia pulled him out after he suffered a broken nose. A lot of fighters keep fighting with a broken nose. Robert didn’t let Mikey fight with it The timing of the fight being stopped came right when Salido was taking over the contest. Mikey had the lead on the scorecards, so having it to the cards at that point enabled him to win. Will we see the same thing from Mikey on Saturday? The difference is, it’s going to be next to impossible for Mikey to build up an early lead on Spence like he did against Salido. So even if Robert strategically pulls Mikey out after round five or six, claiming that he’s injured, he’ll still likely lose.

Tarver was 38-years-old, which is considerably older than the 29-year-old Spence is now. The 6’1″ Hopkins was 41 when he beat the 6’3″ Tarver. The size difference between Hopkins and Tarver wasn’t that much. Moreover, Tarver was never a puncher like Spence. Hopkins didn’t need to worry about the punching power of Tarver when he moved up two weight classes to challenge him. The 5’6″ Mikey will have to worry a great deal about the 5’9 1/2″ Spence’s power, as well as his size. Hopkins had it easy when he moved up to 175. That was for all intents and purposes a dead period for the 175 lb division. It was was after Roy Jones Jr. had faded as a fighter, and there weren’t any talented light heavyweights like there is today with Dmitry Bivol, Oleksander Gvozdyk, Marcus Browne, Sergey Kovalev and Artur Beterbiev. You can argue that if Kovalev moved up in weight to fight any of those guys, he would have lost back in 1996 if they were around. Tarver, a limited fighter at best, was perfect for Hopkins to win an easy title against. But if today’s top light heavyweights could be transported in a time machine back to 1996 to face Hopkins, it probably wouldn’t well for him. In fact, he would likely be beaten as easily as he was in his loss to Kovalev in 2014.

If Hopkins’ prediction of a close win for Spence (24-0, 21 KOs) over the smaller, older and weaker Garcia (39-0, 30 KOs) turns out to be true, then it doesn’t speak too much about him being a good fighter. If Spence can barely beat a lightweight, who was heavily marked up and bloodied against a limited light welterweight in Sergey Lipinets, then it suggests that he’s not the fighter that many think he is. Lipinets put hands on Mikey, and his fame blooded and badly swollen at the end of their fight last year. If Lipinets could do that to Mikey, it’s not going to look too good that Spence is barely beating him. Of course, Hopkins is just guessing, and he likely is going to be off by a galaxy with his prediction of Spence barely winning.

Having seen what Lipinets did to Mikey, it’s hard to imagine this fight even being remotely competitive on Saturday night. Lipinets had Mikey’s facing look badly swollen and bleeding, and he’s not even a top five light welterweight. If Lipinets was able to do that to Mikey, it’s scary to think what the talented 140 lb fighters like Regis Prograis, Ivan Baranchyk, Josh Taylor, Jose Ramirez and Kiryl Relikh would be able to do to him. It’s unfortunate that Mikey didn’t fight any of those guys when he moved up to light welterweight for two fights against Adrien Broner and Lipinets. You can argue that Mikey was selective in who he faced at light welterweight. As far as how Mikey will do against Spence at welterweight, there’s no way of knowing. All you can do is look at Mikey’s lumped up face from his fight with Lipinets, and extrapolate from that to get a prediction of what he’ll look like against Spence. Hopkins’ experience against an old non-puncher in 38-year-old Tarver is a bad comparison to what we’re going to see on Saturday with Spence, a huge puncher, fighting a little guy with no experience at 147 in Garcia.

“Does a win [over Mikey Garcia] solidify you as the second best welterweight in the world right now?” WBA Super World welterweight champion Keith ‘One Time’ Thurman said on FOX Sports to Spence.

“I think I’m already the number one welterweight in the world,” Spence said.

Thurman looked so bad in his recent comeback after two years out of the ring, it’s hard to see him even as a #3 fighter at 147. Thurman has slipped a lot of inactivity, and injuries. He’s not likely to return to the form that he had in the past. Thurman is kidding himself in talking about Spence solidifying himself as the #2 welterweight if he beats Mikey. Spence is already viewed as #1 at 147, and a win over Mikey, which is basically just a stay busy fight for him, won’t do anything to enhance or detract from his position. It’s such a mismatch in size that the fight can almost be viewed as an exhibition match in the same ballpark as Floyd Mayweather Jr’s recent exhibition over kickboxer Tenshin Nasukawa.