Teofimo Lopez vs. Edis Tatli agree to terms for April 20 on ESPN 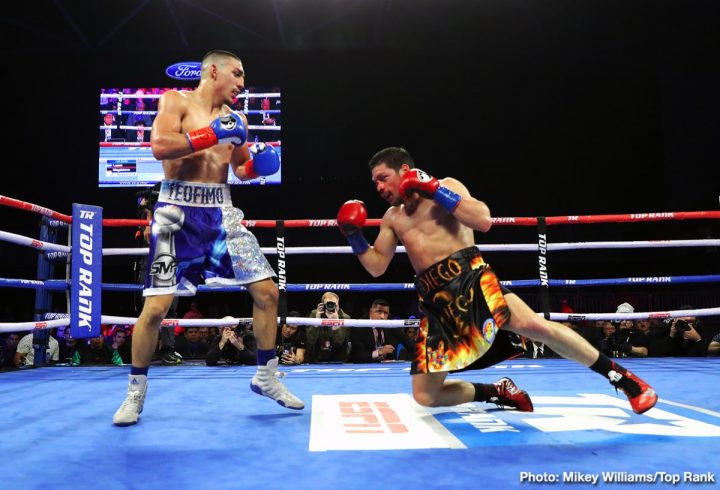 By Aragon Garcia: Highly ranked lightweight contenders Teofimo Lopez and Edis Tatli have agreed to terms to fight on April 20 on ESPN pay-per-view on the undercard of Terence Crawford vs. Amir Khan at Madison Square Garden in New York, according to Mike Coppinger.

This is a big fight for the 21-year-old Teofimo (12-0, 10 KOs), who is looking to get pushed up the rankings in the World Boxing Council to get a title shot at the WBC lightweight belt, which is still held by Mikey Garcia. It’s believed that Garcia, 31, will vacate his WBC title after his match this month against IBF welterweight champion Errol Spence Jr. on March 16. That would leave the WBC 135 lb title vacant for #5 WBC Teofimo to swoop in on and fight it against the highest available ranked contender in the WBC’s rankings.

It would have been nicer to see Teofimo fight Jose Pedraza or Devin Haney for the Crawford vs. Khan card on April 20. Those are notable fighters that would give Teofimo a chance what he can do.

Tatli (31-2, 10 KOs) is ranked #3 IBF, #3 WBO #10 WBC, and he’s a talented fighter with a fair amount of experience since turning pro 12 years ago in 2007. Tatli, 31, is from Finland, and has past wins over Mzonke Fana, Felix Lora, Yvan Mendy, and Francesco Patera. Tatli was beaten by Richar Abril and Patera. He avenged the loss to Patera in defeating him by a 12 round unanimous decision in December 2017. Tatli is a pure boxer with a KO percentage of 30, which is going to put him at a disadvantage against Lopez, who has knocked out 83% of the 12 opponents he’s faced since turning pro three years ago in 2016. Tatli has held the European Boxing Union lightweight title for the last two years since beating Patera in a rematch. That was the second time that Tatli won the EBU belt.

Lopez, ranked #5 WBC, #8 WBA, #9 IBF, and #10 WBO, at lightweight is trying to get a shot at the WBC title held by Mikey Garcia. If Teofimo can win that belt, his promoters at Top Rank Boxing will match him up against WBA/WBO champion Vasyl Lomachenko in a fight that could take place in early 2020. That’s when Top Rank CEO Bob Arum wants to put them both in with each. It’s a win-win for Top Rank and for both of them, since it will increase the star power of both Lopez and Lomachenko. There are no losers for a big fight like that, as long as they both give a good account of themselves in the fight.

This could be a tough fight for Teofimo. Tatli doesn’t have much punching power, but he’s a lot of boxing skills. It’s going to be a fight in which Lopez will need to be careful not to look bad in winning. This is one of those where Lopez can win, but still lose by looking bad in getting the victory. Tatli isn’t a big enough name in the lightweight division for Lopez to have an excuse if he looks bad in winning or if he gets beaten. Losing or looking bad against Lomachenko or Mikey Garcia wouldn’t be a crushing blow to Teofimo’s fledgling career, but struggling against a guy with no power, who has been beaten twice already since turning pro, would be a bad look for Lopez. Teofimo is still young at 21 to be taking on a skilled pro like Tatli. This could be a tough one for Teofimo if he can’t dent his chin early.

SOURCES: Teofimo Lopez and Edis Tatli of Finland have agreed to terms for a 135-pound fight April 20 on the ESPN PPV undercard of Terence Crawford-Amir Khan. Lopez inching closer to a title fight