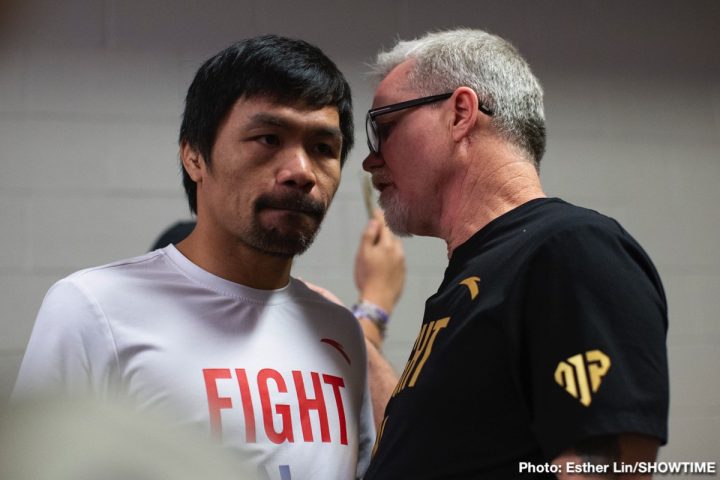 By Allan Fox: Manny Pacquiao says he’s in the negotiation process with Floyd Mayweather Jr. for a rematch, but he still plans on keeping his options open by attending the March 16 fight between Errol Spence Jr. and Mikey Garcia to possibly face the winner.

Pacquiao, 40, will be traveling to Arlington, Texas to attend the Spence-Garcia fight LIVE with the intention of fighting the winner of the contest if he can’t put a rematch with the 42-year-old Mayweather Jr. together.

“The negotiations are ongoing. There will be updates one to two weeks from now,” Pacquiao said to rappler.com about negotiations with Mayweather.

If Mayweather looks at Pacquiao as an stock investment rather than just a fighter, he’ll be able to identify that his money is going to go down the drain unless he cashes in on it by taking the fight with him before he losses value overnight in a defeat at the hands of Spence.

Many of the hardcore boxing fans have no interest in ever paying to see a rematch between Pacquiao and Mayweather, but there’s still enough casual fans that would be willing to see the two of them face each other for them to make some good money. It’s doubtful that the fight will bring in anywhere near the 4 million pay-per-view buys their first fight pulled in back in 2015. The two aging stars might not even bring in 2 million buys. It might be closer to 1 million at this point, but that’s still good money. Mayweather waited too long obviously to make the rematch with Pacquiao, and a lot of interest that was there from the boxing public three to four years ago has evaporated. Mayweather didn’t care to make the fight, so he’s lost out. There’s still some money. If Mayweather primes the pump, he can make some money off the Pacquiao fight if he puts the match together before the Filipino star loses to the Spence vs. Garcia winner, which is expected to be Errol.

Just how serious the negotiations are between Pacquiao (6-1, 7-2, 39 KOs) and Mayweather is unknown. Mayweather, 41, seems to be more interested at this point in negotiating fights with young MMA fighters for him to fight in boxing events. Those kinds of fights won’t likely be profitable for too much longer, as Mayweather’ popularity will deteriorate the longer he’s out of the ring in serious fights against talented real boxers, and not guys from the MMA field.

“I might go and watch in Texas. I will watch how he will fight,” Pacquiao said.

It’s good for Pacquiao to keep his options open just in case he’s let down by Mayweather with him going in another direction. Pacquiao needs to try and put together fights that have a good chance of success. It took Pacquiao six years to get Mayweather to finally face him in 2015. Pacquiao lost that fight by a 12 round unanimous decision, but he fought with a shoulder injury to his right shoulder, which hampered what he could do inside the ring on that night. Pacquiao is healthy now, and ready to avenge the loss to Floyd Jr. if he can get him to negotiate the fight. Given how reluctant Mayweather Jr. has been to fight Pacquiao a second time in the last four years, the chances of success in Manny negotiating that fight are slim. Logically, it makes sense for Mayweather to make the rematch with Pacquiao while he still can, because pretty soon there’s no longer going to be the big money for that fight compared to now, but Floyd does things his own way, and ignoring a big money is right up his alley.

Spence, 5’9 1/2″, would be a tough fight for Pacquiao given his size, power and youth. Garcia, 5’6″, would be an ideal fight for Pacquiao. He can probably beat Mikey, but that fight is unlikely to happen, because Pacquiao wants the winner of the Spence vs. Garcia fight, not the loser. Garcia is expected to lose big against Spence on March 16 in ther fight on FOX Sports pay-per-view at the AT&T Stadium in Arlington, Texas.

Mayweather was in attendance for Pacquiao’s recent fight against Adrien ‘The Problem’ Broner on January 19 in Las Vegas, Nevada. Pacquiao easily took care of Broner (33-4-1, 24 KOs) in beating him by a 12 round unanimous decision by the scores 117-111, 116-112 and 116-112. It’s unknown what was going through Mayweather’s mind in seeing his young protege Broner getting soundly beaten by Manny. Mayweather once avenged one of Broner’s losses during his career to Marcos Maidana by taking him on and beating him in back to back fights in 2014. If Mayweather is going to do that with Pacquiao, and have the boxing world care about the rematch, then he’s going to have to setup that fight BEFORE the Filipino star negotiates to face the winner of the Spence vs. Garcia fight.

If Pacquiao sets up a fight with Spence, he’s likely going to wind up losing badly to him. At that point, few boxing fans are going to care about seeing Pacquiao and Mayweather fight each other again. Right now, it’s the perfect time for Mayweather to fight Pacquiao, because Manny has won his last two fights since losing to Jeff Horn by a controversial 12 round unanimous decision in 2017 in Brisbane, Australia. Pacquiao has since beaten Broner and Lucas Matthysse. The fans didn’t count Pacquiao’s loss to Horn as being a true loss, because of the controversy surrounding the results of that fight. The fight took place in Horn’s backyard in Brisbane, Australia, the scoring seemed to make no sense, and Jeff got away with lots of roughhouse tactics without being penalized or disqualified by the referee. If Pacquiao fights Spence, he’s going to have a lot of problems with his size, power and youth. It’s a bad match-up on paper for Pacquiao.

Pacquiao looked shot against Broner. He’s lost a lot from his game. Mayweather has looked worse though in his last two matches against MMA fghters Conor McGregor and Tenshin Nasukawa. Mayweather looked very slow, and over-the-hill. Pacquiao will have a very good chance of beating Floyd if they fight right now. Pacquiao will likely be considered the favorite to defeat Mayweather if that fight is made right now.


« Teofimo Lopez vs. Edis Tatli agree to terms for April 20 on ESPN