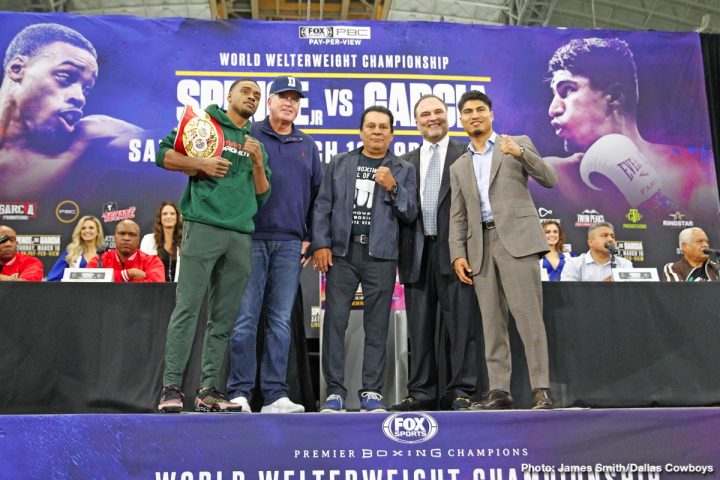 This is the first pay-per-view for both Spence and Garcia. For them to break 1 million buys in their first PPV event, it’s unheard of. No one has done that before. Having the fight on Fox Sports helps, as they’ve done an excellent job of marketing the fight to let the casual boxing fans know about it.

There’s more interest in this fight than the first fight between Saul Canelo Alvarez and Gennady Golovkin in 2017, according to Schaefer.

35,000 tickets have been sold for the Spence vs. Garcia fight, according to Lance Pugmire. There will be a large walk-up crowd on Saturday night to see the fight live. If the ticket sales are an indicator for the amount of PPV buys the fight will pull in, then it’s possible 1 million buys could be a reality. Schaefer believes the Spence-Garcia fight could break the record of 51,240 fans that came out to see Saul Canelo Alvarez vs. Liam Smith in September 2016 at AT&T Stadium. Canelo is a big star. Schaefer is very confident the record for the AT&T Stadium will be broken by Spence vs. Garcia. He sees that as one that will fall.

It would be a big deal if the Spence vs. Garcia could do equal or better numbers than when Canelo fought at AT&T Stadium three years ago. Canelo is obviously become more popular since then, thanks to his two fights with Gennady Golovkin and fights with Amir Khan and Julio Cesar Chavez Jr. The largest ever crowd in the United States for a boxing event was 63,350 for the Muhammad Ali vs. Leon Spinks second fight that took place in September 1978 at the New Orleans Superdome, according to Kevin Iole. Schaefer believes that with the amount of interest the Spence-Garcia fight has generated in the last three to four days, it’s quite possible that it will shatter the all time record of 63,350 set by the Ali-Spinks fight ages ago. Spinks had beaten Ali by a close 15 round split decision in their first fight in February 1978 at the Hilton Hotel, Las Vegas, in Nevada.

The promoters want to beat that mark for the Spence vs. Garcia fight. It’s unclear whether that number is possible right. If Spence-Garcia don’t reach that number for their fight this Saturday, it’s possible they could break that mark in a rematch if their fight is competitive, controversial or ends with an upset win by Mikey. A victory would be HUGE, because so few boxing fans are giving him a chance of winning. This would be an incredible upset on the level of Muhammad Ali’s upset of George Foreman, and Buster Douglas’ knockout win over Mike Tyson. Mikey beating Spence might even be bigger than either of those upsets, because those fighters were fighting in the same weight class. Mikey is moving up from the lightweight division to welterweight to take on Spence.

The number of PPV buys that many are saying the Spence vs. Garcia fight will pull in is 300,000 buys tops. It’s considered an interesting fight for the fans, but Mikey is a lightweight, and that’s not the most popular division in boxing. Spence, 29, hasn’t established him as a big star yet in boxing due to lack of big fights and the fact that he’s not fighting more than one or twice a year. When a fighter is just starting out, they ideally want to fight at least three times a year. That’s Gennady Golovkin became popular in a short period of time. Spence is doing the opposite. He fought once in 2017, and twice in 2018. If he’s lucky, he’ll fight twice in 2019, but that’ll depend on his management digging up an opponent willing to fight him.

“Could it reach a million homes? I dare to say it. I dare to say it,” said Ringstar promoter Richard Schaefer to Yahoo Sports News about this Saturday’s Spence-Garcia fight. “If you would have asked me a week ago, I would have said ‘no.’ If you ask today if it is possible, ‘yes.’”

A million+ pay-per-view buys for the Spence vs. Garcia fight would be outstanding numbers for this fight. It would make both of those fighters a massive money as well. Spence and Garcia haven’t made the kind of money that Saul Canelo Alvarez has pulled in with his big pay-per-view fights in the past against Golovkin, Floyd Mayweather Jr., Julio Cesar Chavez Jr. and Amir Khan. A couple of years ago, Mikey said he felt he would be ready to branch over to become a PPV attraction soon, and we could see it happening from this point on, as long as he puts in a good showing against Spence, and continues to fight high level opposition that interest the U.S boxing public. The fans obviously aren’t going to be as excited if Mikey goes back to the lightweight division after this is over, and continues to fight the obscure guys that they’ve never heard of. If Mikey does return to the lightweight division, he’s going to need to fight someone like Vasyl Lomachenko or Teofimo Lopez. Those are the only two fighters in the lightweight division, besides Mikey, that the fans are excited about seeing. In the best possible world, Mikey would stay at welterweight, and would take on Manny Pacquiao in his next fight after Spence or Keith ‘One Time’ Thurman, and then face Spence again in a rematch. That would be the best possible career move for Mikey. Since Spence is being avoided by the top welterweights, he might need to go after WBO welterweight champion Terence Crawford or move up to 154 and take on IBF/WBA junior middleweight champion Jarrett Hurd.

“It’s really firing everywhere. Bars and restaurants across the United States are reporting unbelievable numbers, in excess of what Canelo and [Gennady Golovkin] did their first fight,” Schaefer said. “The Hispanic bars are tracking like [Floyd] Mayweather and Canelo did.”

A lot of Mexican boxing fans are excited about this fight, as Mikey has a large fan base, and they like the idea of him taking on a really tough challenge in Spence, who is considered the #1 fighter at welterweight in the eyes of a lot of people. Although Spence is from Texas, it’s believed that the crowd will be largely pro-Mikey for the fight.

Spence hasn’t been fighting in Texas. A lot of former fighters like Foreman, Sugar Ray Leonard and Mike Tyson believe that Mikey can do the job on Spence to pull off the upset. Spence is still the favorite to win, but the odds aren’t as wide as they were when the fight was first announced months ago. Boxing fans are starting to believe that Mikey has a real chance of winning.

The recent fight between WBC heavyweight champion Deontay Wilder and Tyson Fury did 325,000 buys on Showtime PPV. If Spence vs. Garcia can do three times that number with it hitting over 1 million buys, it would be a huge feather in their cap to do better numbers than that big fight. It kind of shows the potential that’s out there for a rematch between Spence and Garcia, as long as their fight is competitive. That’s the important thing. It can’t be a wipe-out win for Spence if there’s going to be interest by boxing in wanting to see a second fight between them. Mikey moving on to face Manny Pacquiao is the next logical move for him.