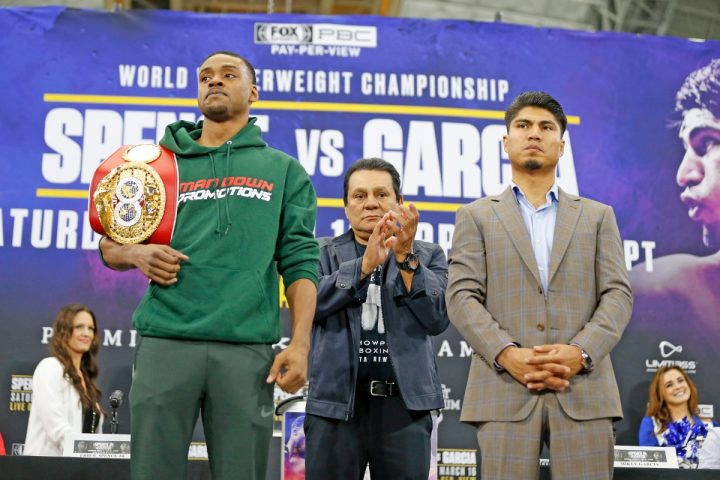 By Jim Dower: Former world champions Andre Ward and Timothy Bradley are both picking IBF welterweight champion Errol ‘The Truth’ Spence to defeat Mikey Garcia on Saturday night in their much awaited mega-fight at AT&T Stadium in Arlington, Texas.

Bradley, who is now one of ESPN’s boxing analysts, sees Spence’s pressure and punching power being too much for the 31-year-old Garcia (39-0, 30 KOs) down the home stretch of the fight. Bradley suggests that Mikey’s trainer Robert Garcia have his towel ready to pull him out of the fight when the fight starts getting out of hand with Spence (24-0, 21 KOs) beginning to inflict too much punishment on the smaller man. Unlike a lot of people, Bradley sees the fight as being a tactical battle in the early rounds instead of a war.

Through most of Spence’s career, he’s gone after his opponents from the opening bell to knock them out as fast as possible. Only in Spence’s fight with the big punching Kell Brook in 2017, he deviated from that style of fighting by boxing the British fighter out of necessity. However, Spence turned up the heat from the sixth round on and eventually forced Brook to quit in the 11th. In Spence’s two fights since the Brook fight, he’s gone after his opponents Lamont Peterson and Carlos Ocampo from the opening bell, hitting them with big shots to get them out of there early in one-sided fights. Why Spence would change that style of fighting against a smaller 5’6″ Mikey Garcia is the major question.

“if Spence even thinks it’s a close fight he will turn the heat up each round. Have the white towel ready,” Bradley said to ESPN.com. Prediction: “Spence by TKO.”

It’s logical to assume that Spence, 29, won’t let Mikey control the rounds uncontested. That’s the way Spence is. He’s used to sparring with the bigger former World Boxing Council junior middleweight champion Jermell Charlo, who is 6’0″ and hits hard, so Spence isn’t going to let a smaller fighter like Mikey get the better of him without looking to hit him back with some major shots. Spence’s ability to handle Mikey’s power and not back down means that he’s going to be hitting him with tremendous shots from the get go.

“I can see Spence with a late round stoppage — 11th or 12th — simply because the added weight and the sheer size and power of Spence will prove to be too much [for Mikey],” Ward said to ESPN.com.

Ward sees the Spence vs. Garcia fight boiling down to the big man Spence being too good for the little man Garcia. Ward sees the fight as the way a lot of people do with Spence, the bigger guy, ultimately having too much size and power for the smaller fighter, who is taking a major risk in moving up two weight classes to fight him. Ward believes that the added bulk that Mikey has put on during training camp to prepare for the Spence challenge will wear him down, and cause him to come apart in the later rounds. Having to carry around weight that you’re not accustomed to will slow Garcia up down the home stretch, making him vulnerable to Spence’s size and big shots.

Both Bradley and Ward agree that Mikey needs to move to move a lot to keep from being drawn into a war against the bigger Spence, who has the size and power to wear Garcia down in a prolonged toe-to-toe type of fight. What Mikey has going against him is he’s never been a good mover before. With Mikey’s punching power, counter punching and quick hands, he’s never had to move away from his opponents. With the exception of Garcia’s fight with Orlando Salido in 2013, Mikey has always been the one that has been attacking his opponents. On Saturday, it’s likely going to be different with Spence applying pressure on Mikey, and forcing him to either battle it out until the bitter end or get on his bike, and try to get away from him.