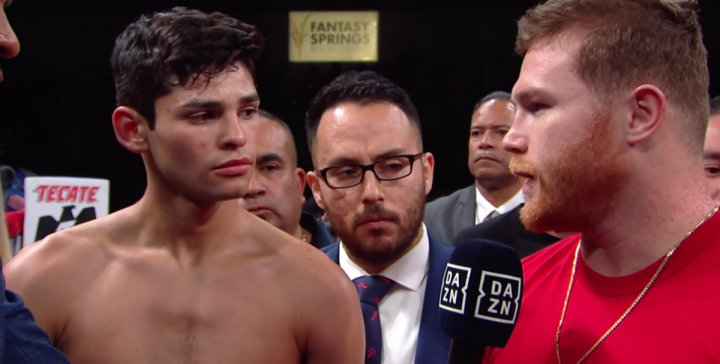 By Dan Ambrose: Lightweight contender Ryan ‘Kingry’ Garcia (18-0, 15 KOs) defeated Jose Lopez (20-4-1, 14 KOs) by a second round stoppage on Saturday night in a scheduled 10 round fight on DAZN at the Fantasy Springs Resort Casino in Indio, California. Garcia, 20, knocked Lopez down with a flurry of shots at the end of the second round.

Lopez, 25, got back up and made it back to his corner as the round ended. Instead of coming out for the third, Lopez stayed on his stool and the fight was stopped. Lopez took some big shots in the second, and it was unlikely that he would have been able to recover to make it through the third if he’d continue fighting.

Garcia was getting hit with a lot of shots from Lopez in the first round. Lopez coming forward looking to land his hard punches, and Garcia was backing straight up to the ropes with his chin in the air, proving to be easy to hit. In the final seconds of the first round, Garcia unleashed a three-punch combination that had Lopez hurt.

In the second round, Garcia used his left hand to keep Lopez from getting close. Garcia held his left arm far out in front of him and used it to push Lopez. It’s an illegal move, but Garcia was able to use it throughout the second round despite being warned by referee Jack Reiss to stop holding his left arm far out in front of him. It looked like Garcia didn’t have the defensive skills to defend from Lopez’s attacks without using this tactic of his left arm out in front of him. In the final seconds of the round, Garcia unleashed an avalanche of shots that ended with Lopez hitting the deck. Garcia had hurt Lopez with a straight right initially, and then badly hurt him with a big uppercut to the head. Lopez got back to his feet on shaky legs, and barely made it out of the round. Referee Jack Reiss could have stopped it, but he chose to let Lopez continue fighting. The round ended at that point, and Lopez went back to his corner.

After the fight, Oscar De La Hoya and Bernard Hopkins of Golden Boy Promotions both spoke of Garcia fighting for a world title soon at lightweight, but they didn’t say who he’d be fighting. Unless the World Boxing Association has their ‘regular’ lightweight title they’re about to put up for Garcia to fight for, there aren’t any options for him. Vasiliy Lomachenko holds the WBA and WBO lightweight belts, and he’s about to face IBF champion Richard Commey as soon as his hand injury heels. The WBC title is held by Mikey Garcia, and #1 WBC Luke Campbell is waiting for a title shot against him. If Mikey vacates the WBC belt, then it would likely be Campbell facing someone like Teofimo Lopez, who is looking hard to beat right now. Ryan Garcia needs more experience before he fights for a world title, because he doesn’t look near ready to take on any of the top fighters at lightweight. Tonight’s opponent for Ryan, Jose Lopez, wasn’t anywhere near the same talent level as the top guys at lightweight. Lopez has recently been knocked out in the sixth round in his last fight by Jonathan Oquendo. Kingry Garcia didn’t gain much fighting him.

Other boxing action on tonight’s card, unbeaten light welterweight Danielito Zorrilla (11-0, 9 KOs) defeated former WBC super featherweight champion Gamaliel Diaz (40-20-3, 19 KOs) by a second round knockout in a scheduled eight round fight. Zorrilla, 25, knocked the 38-year-old Diaz down last in the first round. In the second, Zorrilla dropped Diaz for a second time in the fight. The fight was then stopped. The official time of the stoppage was at 2:59 of round two. Diaz held the WBC super featherweight title from 2012 to 2013. Diaz defeated Takahiro Ao by a 12 round decision. However, Diaz lost his WBC title to Takashi Miura by a ninth round knockout in 2013, and it’s been downhill ever since then.

In arguably the most talented of the fighters on the undercard, unbeaten super featherweight contender Eduardo “Rocky” Hernandez (28-0, 25 KOs) looked sensational in defeating Ibrahim Class (22-6, 10 KOs) by a second round knockout in knocking him down in round two, and then dropping him a second time. The fight was waived off after the second knockdown. The official time of the stoppage was at 1;58 of round two.

This was the 21-year-old Hernandez’s first fight in the U.S, and he looked very impressive. Hernandez is about the same age as the 20-year-old Ryan Garcia, but he looks more advanced than him and more capable of winning a world title in the future. However, Golden Boy might be making a mistake in positioning Eduardo Hernandez to challenge World boxing Council super featherweight champion Miguel Berchelt, who is looking almost unbeatable at age 28.

Berchelt isn’t old and vulnerable yet. Golden Boy would be better off positioning Herandez to go after IBF champion Tevin Farmer, WBA ‘regular’ champion Andrew Cancio or WBO belt holder Masayuki Ito. Cancio, Farmer and Ito are the vulnerable champions at 130 right now. The guys that Hernandez should veer away from is Berchelt and WBA Super World champ Gervonta ‘Tank’ Davis. Those two are solid fighters that aren’t going anywhere, not even against a good young fighter like Eduardo ‘Rocky’ Hernandez. Golden Boy should consider matching Hernandez against Ryan Garcia, and then focusing on building up the winner of that fight to try and turn into a star. The loser of that match would obviously be beaten by the other top fighters at super featherweight and lightweight. It’s painfully obvious that Hernandez would wipe the deck with Ryan Garcia, and it wouldn’t because he’s one years older than him. Hernandez is a more well rounded fighter than Garcia, who looked flawed tonight despite winning by a second round knockout.

Unbeaten welterweight prospect Aaron McKenna (7-0, 4 KOs) defeated Lorett Olivas (3-1, 1 KOs) by a six round unanimous decision. McKenna knocked Olivas down in the first round. The scores were 60-53, 60-53 and 60-53. The lanky, bone-thin 6’1″ McKenna hammered Olivas at will with shots from every angle for the entire six round fight, bloodying him and easily winning. Only 19, McKenna, who comes from Ireland, is likely going to fill out in the future as he continues to grow.

Right now, McKenna is too thin to hold up against a sturdy welterweight. He’s got to fill out more, and move up in weight, which is where his problems will begin. Right now, McKenna has an advantage over the limited welterweights he’s being matched against by Golden Boy, but that’ll change once he moves up to 154 and 160, and faces guys that are the same height as him, but much stronger. If McKenna wants to have success, he’s going to need to try and find a way to stay at welterweight as long as he can.

Unbeaten featherweight prospect Joet Gonzalez (22-0, 13 KOs) picked up his 22nd win over his career in defeating former International Boxing Federation super flyweight champion Rodrigo Guerrero (26-8-2, 16 KOs) by a fifth round knockout. Gonzalez, 25, knocked Guerrero down in round one. The 31-year-old Guerrero used his talent and experience to land some nice shots on Gonzalez to earn his respect to keep him from finishing him early. However, Gonzalez’s youth, speed and power shown through, as he knocked Guerrero down in the fourth round. In the fifth, Gonzalez flurried on the shell-shocked looking Guerrero util the referee Jerry Cantu stepped in to halt the fight. The official time of the stoppage was at 2:27 of round five. Gonzalez is another one that looks to have a good future as well. He looks more polished than Ryan Garcia as well. It’s unclear why Golden Boy isn’t creating a lot of hype about him the way they are with Garcia.

Recently beaten former light welterweight world title challenger Antonio Orozco (28-1, 17 KOs) defeated journeyman Jose Rodriguez (25-13-1, 13 KOs) by a 10 round unanimous decision. The scores were 97-93, 97-93, an 99-91. Boxing News 24 scored it for Orozco by the score 99-91. He looked good beating a guy that was completely out of his league in 32-year-old Rodriguez, who has been beaten in the past by Jose Pedraza, David Emanuel Peralta, Mario Barrios, Sharif Bogere, and Felix Verdejo. Rodriguez has been in with some good fighters in the past. Unfortunately, he’s lost to all of them. In Orozco’s last fight, he was beaten by WBC light welterweight champion Jose Carlos Ramirez by a 12 round unanimous decision last September in a one-sided fight. Orozco could have made the fight an easy one for him if he’d put his foot on the accelerator, but he chose to fight in the same lazy way that he did against Jose Ramirez and Humberto Soto, and he looked poor in both of those fights. Orozco paces himself too much, and for that reason he’s always going to have problems when he fights the better fighters in the light welterweight division. Tonight, Orozco wasn’t fighting one of the better guys, so he dominated while fighting at a slow pace.

WBO light flyweight champion Angel ‘Tito’ Acosta (20-1, 20 KOs) successfully defended his WBO title in stopping challenger Ganigan Lopez (35-9, 19 KOs) by an eighth round knockout. The hard hitting Acosta knocked the 38-year-old former WBC light flyweight champion Lopez down in the eighth round to get the stoppage. The official time of the stoppage was at 1:55 of round eight. The win for the 28-year-old Tito Acosta, who comes from Puerto Rico, was his third defense of his WBC 108 belt, and his fourth consecutive victory since losing to the talented Kosei Tanaka (13-0, 7 KOs) by a 12 round unanimous decision in May 2017. That loss for Acosta to Tanaka, 23, wasn’t a fluke thing. Tanaka is the real deal, and would likely beat Acosta again if he dared facing him a second time. 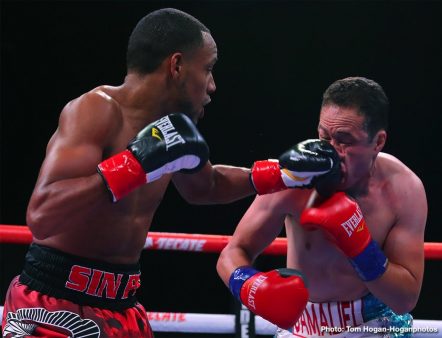 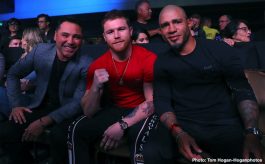 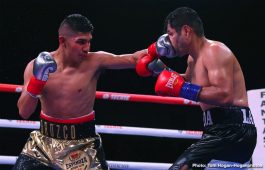 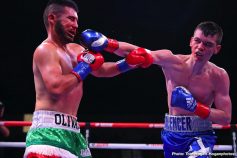 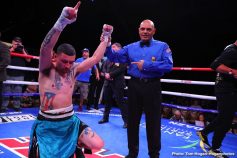 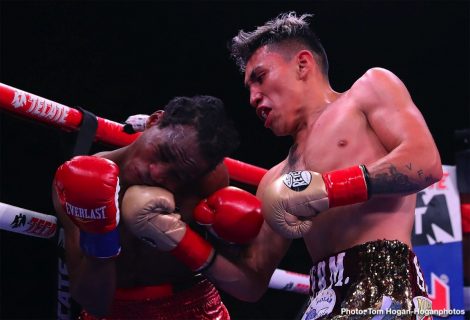 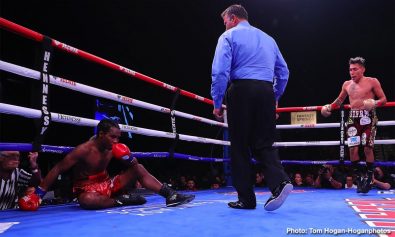 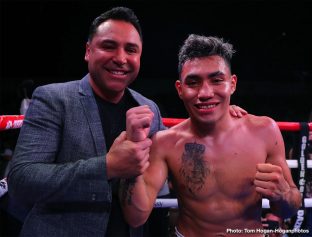 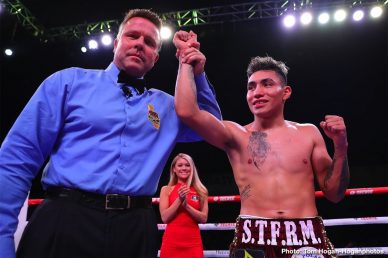 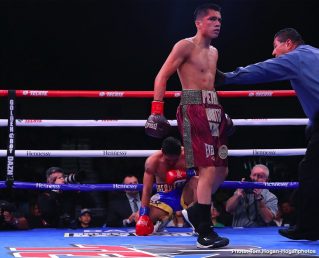 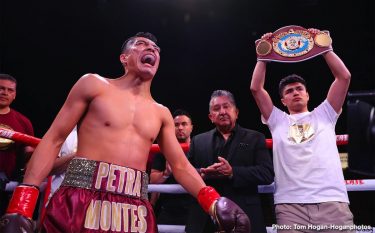 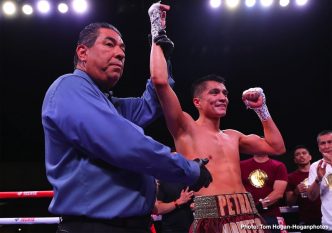 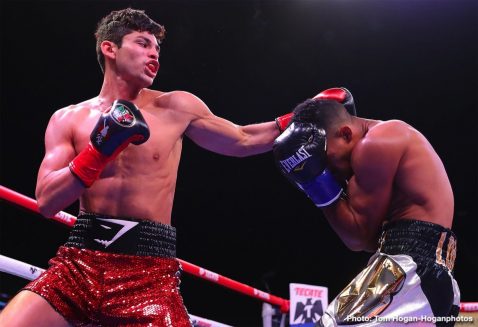 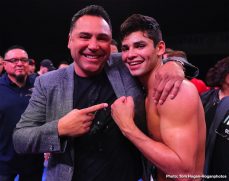 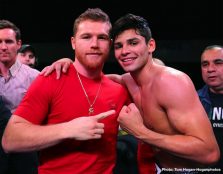 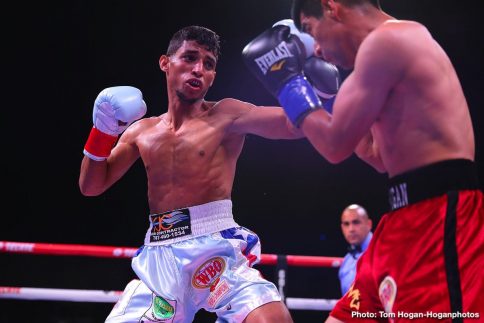 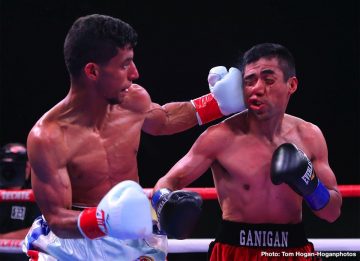 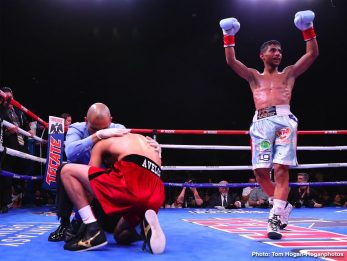 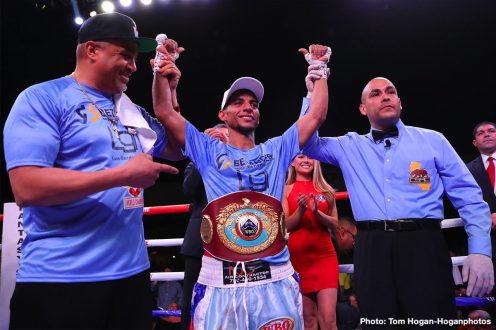 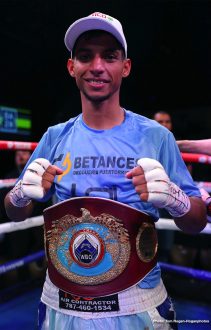 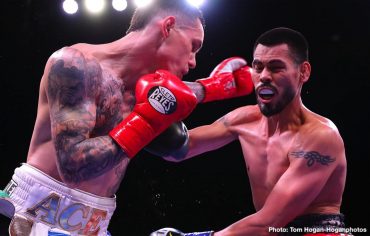 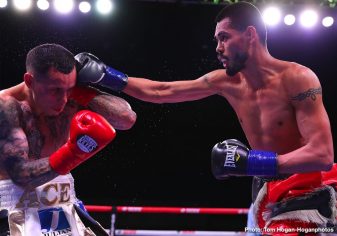