Povetkin will NOT be fighting Usyk next 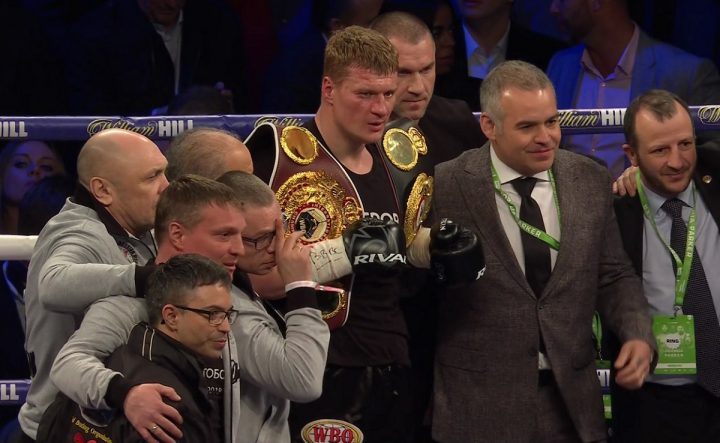 By Tim Royner: Alexander Povetkin (32-2, 24 KOs) won’t be facing Oleksander Usyk (16-0, 12 KOs) in his heavyweight debut after all, according to latest boxing news. Povetkin, 39, will taking another fight instead of facing Usyk on May 18.

Matchroom Boxing USA/DAZN Eddie Hearn had been counting on Povetkin fighting Usyk on May 18 on DAZN, possibly in Chicago, Illinois. Hearn said that if he couldn’t Povetkin to take the fight, he would look to match Usyk, 32, against former world title challenger Carlos Takam (36-5-1, 28 KOs) on the May 18 date instead. Hearn said that Povetkin might fight on the undercard of Usyk vs. Takam against 2012 U.S Olympian Michael Hunter (16-1, 11 KOs).

It’s unclear whether Povetkin’s manager Vadim Kornilov will bother putting him with the 30-year-old Hunter, who has a VERY high work rate, and a good chin. With Povetkin coming off of a seventh round knockout loss to IBF/WBA/WBO heavyweight champion Anthony Joshua in his last fight last September, facing Hunter would be a hard fight for him coming off a loss. Hunter is arguably more talented than the guys that Povetkin has been facing in the last five years of his career since his defeat to Wladimir Klitschko in 2013. Povetkin has won a lot of fights since losing to Wladimir, but he’s done it against lesser heavyweights like Johann Duhaupas, Mariusz Wach, Christian Hammer, Mike Perez, Manuel Charr, Andriy Rudenko and David Price.

Hunter would likely easily beat all of those guys by knockout. If anyone should be fighting Hunter, it should be Usyk. If he wants a tough fight, then Hunter is the guy he should be fighting. Unfortunately, Hearn won’t make that fight, because Usyk already beat Hunter a 12 round unanimous decision in April 2017. Usyk had to get on his bicycle to beat Hunter, due to him getting hit a lot. Usyk ended up hitting and moving the entire second half of the fight. Usyk won by the scores 117-111, 117-111 and 117-111. Next to Mairis Briedis, Hunter gave Usyk his toughest fight as a pro.

Takam, 38, lost to Dereck Chisora by a 8th round knockout last July in London, England. Before that, Takam was stopped in the 10th round by Joshua in October 2017. The reason why Hearn would want to use Takam for Usyk’s heavyweight debut is for a couple of reasons. First off, Takam is well known to British boxing fans, and to the hardcore fans in the U.S, so he could count on them wanting to see the Usyk-Takam fight on DAZN. Secondly, it would give fans a chance to compare how Usyk dealt with Takam compared to Joshua and Chisora. It makes sense, but it’s still hard to see Usyk gaining much in fighting a guy that has lost 2 out of his 3 fights with both losses being knockout defeats. What does Usyk gain in fighting someone like that? If Usyk fights 2012 U.S Olympian Michael Hunter, he’d be fighting an American on DAZN, and he would be dealing with a guy that has won his last four fights since his loss to him.


« Jacobs plans on knocking out Canelo to avoid controversy

Briedis vs Glowacki & Dorticos vs Tabiti: Ticket Info, How & Where To Watch »