Jacobs plans on knocking out Canelo to avoid controversy 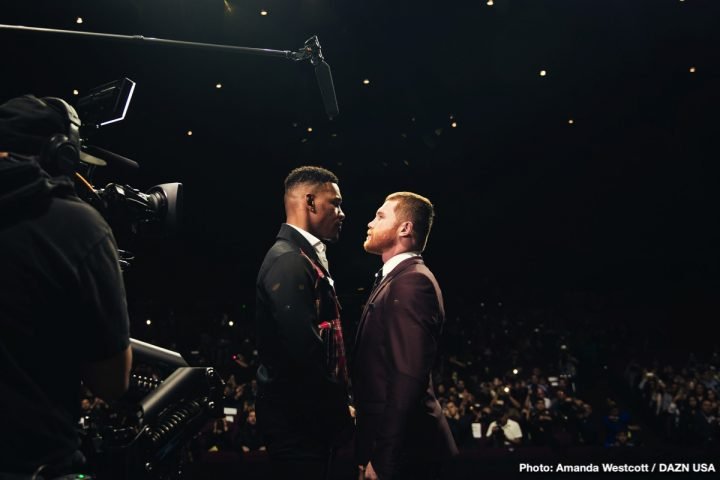 By Mike Smith: Daniel Jacobs wants to make sure that the the judges are impartial and fair for his unification fight against Saul Canelo Alvarez (51-1-2, 35 KOs) on May 4 on DAZN. The Mexican star has been involved two recent controversial fights in Las Vegas, Nevada at the same venue that he’ll be facing Jacobs (35-2, 29 KOs) on the 4th of May at the T-Mobile Arena.

The combination of Jacobs’ size, speed, power and mobility will be too much Canelo, according to Daniel. He says that Canelo has faced bigger, stronger, faster and more mobile fighters than himself, but he’s never faced anyone before that had all those qualities going for them at once. Jacobs has a lot of physical talent going for him, but he doesn’t use them to the best ability. For example, Jacobs is a huge puncher with excellent hand speed. But instead of going after his opponents early in his fights to use those attributes, Jacobs will often use his feet to stay out of harm’s way. He didn’t used to fight that way earlier in his career. Jacobs’ fifth round knockout loss to Dmitry Pirog in 2010 made him reluctant to go after his opponents like he used to.

“I feel capable of knocking out Canelo,” Jacobs said to ESPN.com. “Canelo has fought with guys who are bigger, he fought against others who are faster or have better boxing skills, but all those three things in one night, I do not think he has faced before, so I think he has a lot of things. So he has many challenges on May 4.”

No one has gotten the better of Canelo by taking the fight to him. Gennady Golovkin at beating Canelo with pressure, as did James Kirkland, Liam Smith, Alfredo Angulo and Jose Miguel Cotto. Those are the fighters that went straight at Canelo hoping to stop him. Jacobs is a different type of fighter than all of those guys in that he’s faster, bigger and possibly stronger than all of them. Golovkin is a big puncher, but his shots are easier to see than coming than Jacobs’ punches. Canelo seemed to track GGG’s shots each time he would let his hands go.

Jacobs (35-2, 29 KOs) doesn’t want to end up like Gennady Golovkin, who twice was involved in fights against Canelo that ended in controversy. Jacob feels he can take the judges out of play by knocking Canelo out, but that may be easier said than done.

Oscar De La Hoya doesn’t see anything sinister going on with Canelo getting what some boxing fans believe is preferential scoring by the judges for his fights in Las Vegas. De La Hoya believes that all a fighter needs to do is fight harder, and they can win. In other words, the fighters need to “convince” the judges that they deserve to be given the win based on their effort. De La Hoya points out that some boxing fans thought he was given preferential treatment during his career when he fought in Las Vegas, and yet he was still beaten five times in that city, with two of the losses being controversial.

A lot of boxing fans felt that De La Hoya should have lost his fights against Pernell Whitaker and Felix Sturm, and those were both fights that took place in Las Vegas. The two fights that De La Hoya was likely referring to when he mentioned having been robbed in Vegas was his fight with Felix Trinidad and his second contest against Shane Mosley. Having seen both of those fights, De La Hoya deserved to lose both of them. De La Hoya stopped fighting hard after building up a lead in the first five round against Trinidad, and he let him take over the fight from the sixth round on. That was clearly a loss for De La Hoya. In his De La Hoya’s second fight with Mosley, he was outworked in the second half of the fight, and didn’t do enough to deserve the win. De La Hoya’s wins over Sturm and Whitaker were clearly controversial. A past his prime, Whitaker took De La Hoya to school in 1997. Shortly after Whitaker’s to De La Hoya, he was beaten soundly in back to back fights by Trinidad and Carlos Bojorquez. There was nothing controversial about those fights. Whitaker lost, and he then retired from boxing. De La Hoya didn’t deserve the win over Whitaker, and his win over Sturm came right before his big money fight against Bernard Hopkins in 2004. A lot of boxing fans felt that De La Hoya was given a win over Sturm so that it wouldn’t mess up the big money fight against Hopkins that came in the same year in Las Vegas. There were no robberies impacting De La Hoya’s career from this writer saw of his past fights. It was more a case of De La Hoya’s opponents Whitaker and Sturm being on the receiving end of controversial decisions.

“It should not be a thing to begin with – this should be a fair sport where the best man wins, not the best man who has the most influence in the sport,” Jacobs said about the judging.

Jacobs wants to be safe, he’s going to need to go after Canelo, and fight him tooth and nail on May 4 to make sure he doesn’t wind up in the same position that some of the Mexican star’s past opponents have been in when fighting him.

These are the fighters that have been involved in controversial fights with Canelo:

– Erislandy Lara: Canelo beat Jacobs by a controversial 12 round split decision in July 2014 at the MGM Grand in Las Vegas. Canelo landed only 31 head shots in the entire fight, an badly outworked by the Cuban. The scores were 115-113, 117-111 for Canelo, and 115-113 for Lara. Many boxing fans thought Lara deserved the win, and they still believe he should have won. After the fight, Lara for a rematch, and was told by De La Hoya to get in the back of the line behind the other contenders. There was never a rematch given to Lara.

“I just hate that it exists, but knowing that, I’m going to go to the fight and take things under my control and win decisively so there’s no controversy,” Jacobs said about the controversial scoring that has been going in Canelo’s favor recently and in the past.