Miguel Berchelt vs. Francisco Vargas II on May 11 on ESPN 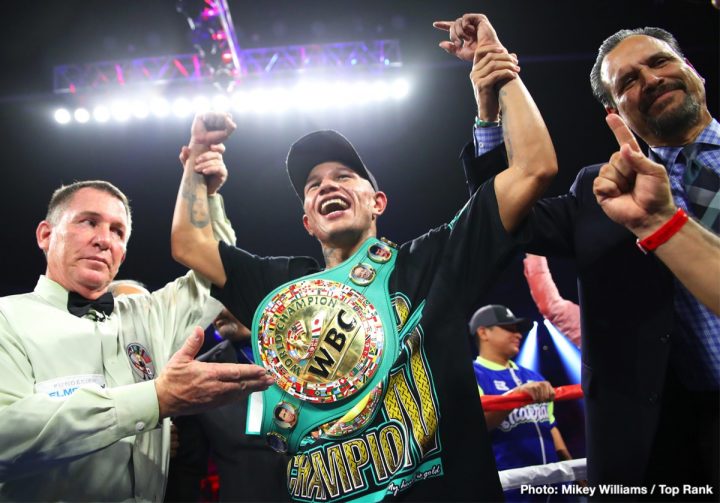 By Aragon Garcia: WBC super featherweight champion Miguel ‘El Alacran’ Berchelt will be defending against former WBC 130 lb champion Francisco ‘El Bandito’ Vargas in a rematch on May 11 on Top Rank Boxing on ESPN at The Forum in Inglewood, California. Berchelt vs. Vargas will be the main event in a card that still needs to be filled out with the undercard by promotional giant Top Rank.

The two warriors were previously scheduled to face each other this month on March 23, but Berchelt, 27, was injured during training camp, forcing the postponement of the rematch. Berchelt (35-1, 31 KOs) injured his right hand while training.

Vargas (25-1-2, 18 KOs) has won his last two fights in beating Rod Salka and Stephen Smith. ‘El Bandito’ Vargas looked good in both contests. However, at 34, it’s unknown how much he has left in the tank to challenge Berchelt a second time. This is obviously the biggest payday fight Berchelt could get, but he would be probably be better off if he were to challenge IBF 130 lb champion Tevin Farmer, WBA ‘regular’ champion Andrew Cancio or WBO champion Masayuki Ito. Those are all guys that Vargas would have an excellent shot at beating. Berchelt and WBA Super World champion Gervonta ‘Tank’ Davis might too young, too talented and too powerful for the 34-year-old Vargas at this stage in his nine-year pro career.

It was only a little over 2 years ago Berchelt, then just 25, dealt Vargas a defeat in beating him by an 11th round TKO on January 28 at the Fantasy Springs Casino, in Indio, California. The fight was stopped at 2:19 of round 11 due to cuts that Vargas had suffered. The timing for the fight was a bad one for Vargas, who had suffered cuts over his eyes in two grueling contests against Takeshi Miura and Orlando Salido. Vargas took a lot of big shots in both of those fights in stopping Miura in the 9th in 2015, and fighting to a 12 round draw against Salido in 2016. Vargas was asking for trouble in fighting Berchelt after those two back to back fights.

Vargas still fought remarkably well against Berchelt in landing 330 of 1032 shots for a connect percentage of 32, according to CompuBox. Berchelt was busier in connecting on 430 of 947 punches for an incredibly high 45% connect rate. It’s unbelievable that Berchelt was able to land 430 punches during a fight that lasted 11 rounds. For a lot of fighters, throwing over 400 punches is an entire night’s work. But for Berchelt to have landed 430 shots with a connect percentage of 45, it was almost unheard of. You’ve got to give mad props to Vargas for him being able to take that many punches without getting stopped earlier in the fight. At the time of the stoppage, Berchelt was ahead by the scores 96-94, 96-94, and 95-95.