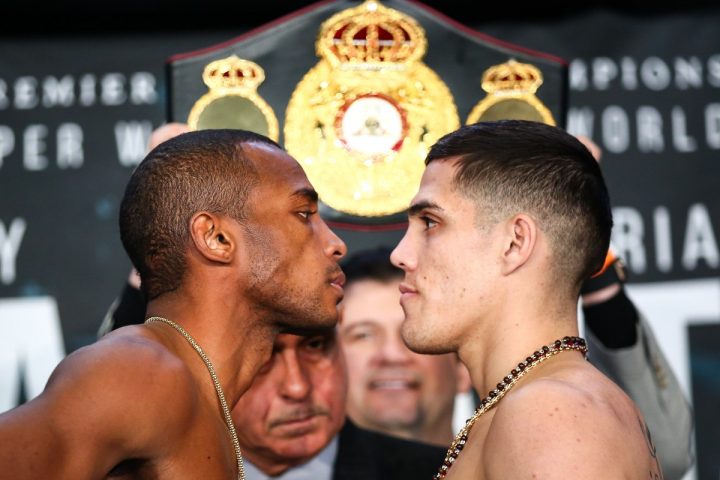 By Jim Dower: Former WBA 154 lb champion Erislandy Lara (25-3-2, 14 KO) weighed in at 153.5 pounds for his title challenge against the younger 29-year-old undefeated WBA ‘regular’ junior middleweight champion Brian Castano (15-0, 11 KO) for their fight on Showtime this Saturday night on March 2 at the Barclays Center in Brooklyn, New York.

Castano weighed in right at the junior middleweight limit at 154 pounds.

There’s a lot of unknowns about whether Lara has enough left in the tank to defeat the blazing fast Argentinian Castano, who comes from a good amateur background and is fighting at a very high level at this point in his seven-year pro career. Lara will be turning 36-years-old next month, and he’s coming off of a long 11 month layoff and a 12 round split decision defeat at the hand of IBF junior middleweight champion Jarrett Hurd last year in one of the best fights of the year on April 7, 2018.

Although Lara gave Hurd all he could handle in that fight, he was dropped by a left hook in the 12th round. That knockdown proved to be costly for Lara with him losing by the scores 114-113, 114-113 for Hurd, and 114-113 for Lara. The way Lara fought in that fight, Castano might not be able to hang with him. Lara, who usually economical with his punches, increased his work rate and was matching Hurd punch for punch.

Castano had a nice amateur career in beating the likes of Errol Spence Jr. Before turning pro in 2012, Castano defeated Sergiy Derevyanchenko in the World Series of Boxing in 2012. Obviously, Castano didn’t have to go 12 rounds to beat Spence in the amateur ranks, so you have to take his win over Errol with that in mind. Castano would have his hands full against Spence at the professional level, and it would end badly for the Argentinian. Castano looked worn down in his six round fight against Derevyanchenko in 2012. Castano won the fight, but he looked he didn’t have much left. Derevyanchenko was like a tank, and putting hands on Castano. It was a good move on Castano’s part not to fight at middleweight after he turned pro. He’s better off at 154, and he might even be better if he fought at 147 if he could make weight or that division.

Most boxing fans see Lara as the guy that have his hand raised at the end of the fight on Saturday, but for many of them, they haven’t seen too much of Castano for them to know enough to make an accurate prediction on the fight. The only thing one can go on is how Castano looked recently in beating Cedric Vitu and Michel Soro, two very talented contenders at 154. Castano dominated both of them in winning. Castano is catching Lara at the right time for him to upset him. Lara took a lot of unishment in his loss to Jarrett. It doesn’t matter that he’s been put of the ring for almost a year. It was the kind of fight where Lara might have lost something. If this is the same Lara that fought Hurd a year ago, then Castano might be over his head. That version of Lara is better than what we’ve seen from Castano as a pro.

Former heavyweight world title challenger Luis ‘King Kong’ Ortiz (30-1, 26 KOs weighed in at 238 3/4 pounds for 10 round bout against Christian Hammer (24-5, 14 KOs). Hammer, 31, weighed in at 257 12 lbs, which is a normal weight for him. Ortiz, 39, is a little lighter than the 241 pounds that he weighed for his last fight against Travis Kauffman last December. The 238 lbs Ortiz weighed in is the lowest weight for him in four years since 2015 for his bout against Matias Ariel Vidondo in October of that year. Ortiz stopped Vidondo in the third round. It’s not surprising that Ortiz came into this fight with Hammer lighter, as he’s one of IBF/WBA/WBO heavyweight champion Anthony Joshua’s potential opponents for later this year.

It’s unclear whether the lighter weight will serve Ortiz well against Hammer, considering that this is a fight that he would likely win even if he was in the 240s, and not looking in great shape. Hammer is a fringe level contender, and not considered one of the more talented guys in the division. Hammer’s best win of his career was a stoppage victory to David Price in 2017. Ortiz, 39, is the favorite in this fight, and for good reason, he’s one of the most talented heavyweights in the division. Ortiz is the boogeyman of the division. Deontay Wilder chose to take him on, and he barely escaped with his title in surviving a scare in the seventh round to come and stop him in the 10th. Ortiz has won two fights since then in beating Razvan Cojanu and Travis Kauffman by knockout. 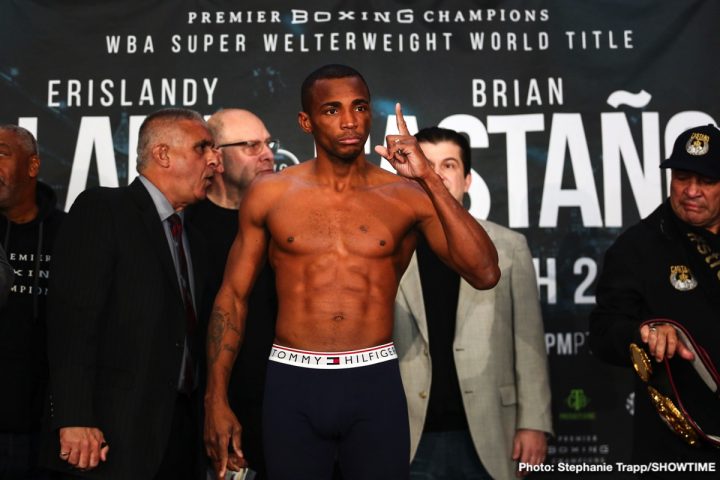 
« Miguel Berchelt vs. Francisco Vargas II on May 11 on ESPN