Lomachenko: ‘Mikey Garcia has NO chance against Errol Spence’ 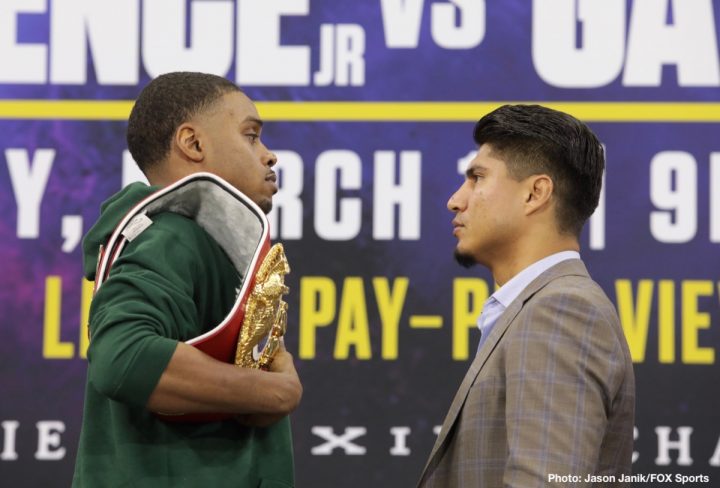 By Sean Jones: WBA/WBO lightweight champion Vasyl Lomachenko sees a bleak situation for unbeaten Mikey Garcia for his fight this weekend against Errol Spence Jr. at the AT&T Stadium in Arlington, Texas. Lomachenko thinks Garcia (39-0, 30 KOs) is walking into a fight against IBF welterweight champion Spence (24-0, 21 KOs) this Saturday night that he has ZERO chance of winning.

The size difference is what bothers Lomachenko. He thinks the 5’9 1/2″ Spence is just too big for the 5’6″ Mikey. It’s not just the height advantage for Spence that has Lomacheko thinking Mikey has no chance of winning. It’s the weight, power, intelligence and the boxing skills of Spence that makes him believe that Mikey has absolutely no chance of pulling off the win on Saturday.

“I respect Mikey. It’s a big move, and I don’t give him any chance in this fight, because Errol Spence is too big, too strong, too smart and too tough,” Lomachenko said to ESPN in giving his analysis of the Spence vs. Garcia fight.

This isn’t the first time that Lomachenko has commented on Mikey not having a chance against Spence. Lomachenko has been saying this all along ever since the Spence-Garcia fight was first announced. It’s a fight that even Lomachenko take. He says he wouldn’t do what Mikey is about to try to do, because the size difference. Lomachenko, 5’7″, is even taller than Mikey, and he wouldn’t make that move up to welterweight to face Spence. Mikey says that he proved that he can defeat taller fighters with his recent 12 round decision win over 5’11” IBF lightweight champion Robert Easter Jr. Mikey feels that if he could beat a tall fighter like Easter, then he can defeat the 5’9 1/2″ Spence, who is a little bit shorter. However, there’s a considerable difference in punching power, and weight between Spence and Easter Jr. Spence is a big puncher. Easter Jr. lacks the punching power that Spence possesses, so it’s not a good comparison that Mikey makes in talking about the two.

Lomachenko, 30, would like to fight Mikey in the future if he moves back down to lightweight to defend his WBC title. That’s a fight that Lomachenko has wanted for some time, and it’s still possible as long as Mikey can make weight for the division. He’ll have to lose all the extra weight that he’s put on for the Spence fight, but it shouldn’t be difficult. It’s muscle weight, and it’ll come off easily.

“Of course, it’s my favorite fight,” said Lomachenko when asked if he wants to fight Mikey Garcia later this year. “He’s a top fighter. He’s a big name, and he’s still a top fighter with the WBC 135. So, of course, after his fight [with Spence], if he can make this weight, 135, I’m ready. I will be ready,” Lomachenko said.

Mikey could have taken the fight with Lomachenko instead of moving up to welterweight to face Spence. A lot of boxing fans think Mikey didn’t want any part of Lomachenko, because there would be no excuse to give the fans for why he lost. Mikey couldn’t say that he was because of Lomachenko being too big or too strong. There would be a lot more negative feedback for Mikey in losing to Lomachenko than what he’ll face if he takes a loss to Spence this Saturday. One good thing that could come from Mikey losing for the first time in his career is he might be more willing to face Lomachenko. Without having to protect his unbeaten record, Mikey could face Lomachenko with noting to lose. Mikey might be more willing to take that fight now than he was before. Moving back down to lightweight will put Mikey in position where he’ll have three potentially fights ahead of him in Lomachenko, Teofimo Lopez and Luke Campbell. It’s unclear whether Top Rank would let Teofimo fight Mikey. They might no go for that idea, because if Mikey beats the inexperienced Lopez, it would mess up a future Lomachenko-Lopez fight.

Once Lomachenko unifies the lightweight division, he says he’s willing to move down to super featherweight to challenge WBA champion Gervonta ‘Tank’ Davis at that weight if his promoters at Top Rank Boxing can arrange it.