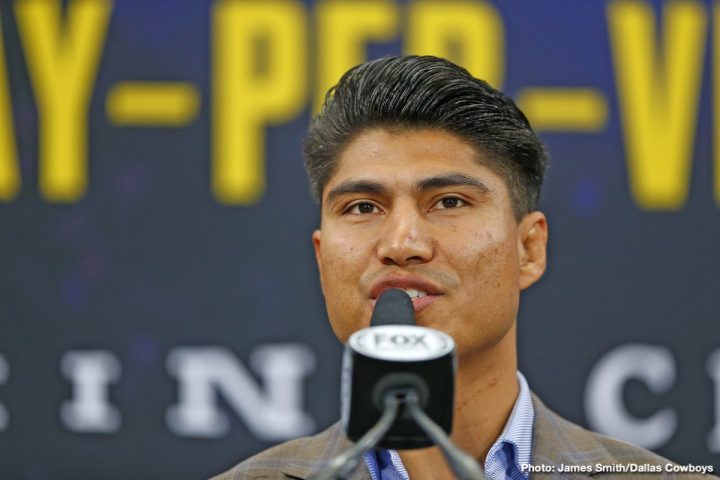 By Sam Genge: This weekend, Mikey Garcia will be moving up two weight divisions to take on the IBF Welterweight World Champion Errol Spence Junior, a man considered by many as the most feared at the 147 pound division. Is this a business move for Mikey or is he cut from the same cloth as the old generation of boxers who are just there to fight.

Mikey Garcia is still considered to be on a comeback to the sport after two and a half years of being inactive. Mikey fought against Burgos in January 2014 where he started having issues with his contract as well as not feeling as though his promoter was taking too large of a chunk of his fight purses. At this time, he was already a two weight division World Champion. In April of 2014 Mikey sued his promoter, Top Rank, and did not fight again until June 2016 against Rojas. Eventually Mikey re-signed with Top Rank and has made a winning return to the sport, gaining two more world titles in another two weight classes.

On November 13, 2018 the PBC announced that Mikey Garcia and Errol Spence Junior will be fighting for Spence’s IBF world title. This announcement shocked many and even kicked off a series of memes about the size difference and the obvious mammoth task Garcia faces. Moving up two divisions has not seen fighters have a great deal of success recently with Kell Brook and Amir Khan coming to mind as the obvious ones. On top of this, Spence is considered a big welterweight so Mikey is absolutely up against it in this fight.

“I was a killer, I wanted to hurt people in dramatic fashion, These boys these days are businessmen” – Mike Tyson.

Since the days of Ali, Tyson, Holyfield, Lewis, Chavez, to name a few, boxing really has become more about business in today’s world. Unfortunately, many fights that the public yearns to see are not made because of politics and business. I hate to mention him but Floyd is a classic example of this, he took fights with people when they made the most money for him and often when it protected his cherished “0”, in many ways he paved this business first minded approach to the sport. To throw in added complications, the rise of streaming services like DAZN along with promoter’s bickering with each other, have made the best fights often too difficult to make.

Everybody wants to make money in this world, so it’s easy to understand that boxers see the likes of Floyd making 100m for a fight and think that is what they should be earning. AB is a classic example of this, he turned down Eddie Hearn’s offer of a guarantee close to 2.5m a fight, in a three fight deal. AB scoffed on social media and stated that he is worth way more money. He went on to make a guarantee of 2m for a fight against a genuine money maker in Manny Pacquiao, which was also his first pay per view main event. Now, who knows when and if he will fight again.

There are still big names for Mikey to fight at lightweight where he would not have been scrutinised for staying, had he done so. The question that remains unanswered is this: why would Mikey not only accept this fight, but actively pursue it? Because Mikey is daring to be great, he is part of the small group of fighters today that are just that, fighters, not business men. In a sport full of businessmen, Mikey remains a fighter.