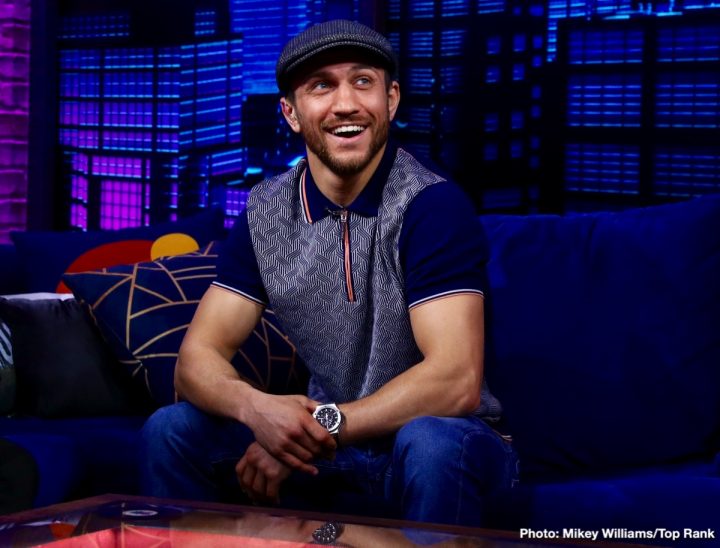 By Dan Ambrose: Lightweight champion Vasyl Lomachenko says he expected more from Mikey Garcia in his fight against Errol Spence Jr. on March 16. What Lomachenko observed was Garcia (39-1, 30 KOs) came to pick up a check, and to make sure he survived the full 12 rounds without getting knocked out. In other words, Mikey didn’t try and win the fight the way warriors do. He just wanted to go the distance to escape in one piece.

Lomachenko’s promoter Bob Arum of Top Rank Boxing was equally disappointed in what he saw from Mikey, saying he “cheated” the fans by not giving a good effort to try and win. Arum added that Mikey can forget about getting a 50-50 purse split with Lomachenko now off of that performance against Spence, because it’s not going to happen.

“I expected a little more of him, but in that fight he wasn’t fighting to win,” Lomachenko said to Loma official TV. “In that fight he entered the ring to get his check and to keep standing through all 12 rounds. I did not enjoy his performance.”

What Lomachenko is saying about Mikey just looking to get a check is similar to what a lot of boxing fans on social media were saying about him in watching his lackadaisical effort against Spence on the night. They saw that Mikey was comfortable just hiding behind his guard, and not looking to put himself in harm’s way.

If Mikey is serious about wanting to fight Lomachenko, and there are some people who doubt that he wants any part of the 2-time Olympic gold medalist from Ukraine, then he needs to redeem himself by beating someone noteworthy at either lightweight or light welterweight. Going straight into negotiations for a fight against Lomachenko wouldn’t be a good idea for Mikey, given the huge hit his popularity has taken with his loss to Errol. If Mikey could successfully his World Boxing Council lightweight title a three or four times against the likes of Luke Campbell, Devin Haney, Teofimo Lopez and Jose Pedraza, that should be enough for him to get back to where he was before he lost to Spence. Those four fights are all doable ones for Mikey. He’s got the clout to make all four of them happen. It’s question mark whether Mikey can beat all of those guys or even some of them. If Mikey fights to survive like he did against Spence, then he’ll to all four of those fighters.

Spence created an easy blueprint to follow in how to beat Mikey by throwing a lot of punches to overwhelm his historically anemic work rate. Spence (25-0, 21 KOs) threw 1,083 punches against Garcia in an overwhelming display of offensive fire power. The only thing Mikey could do is cover up and wait for the shelling to drop off each time. Spence was just unloading on Mikey, who looked like he wanted no part of mixing it up with him. Good fighters are supposed to be able to punch in between the incoming blows, but Mikey couldn’t or better yet, he WOULDN’T even try to throw shots in between. Mike had a bunker mentality in just wanting to wait until the bombardment was over before he would think of throwing shots. Every once in a while, Mikey would look around to see if the coast was clear before coming out from behind his high guard to throw an ineffectual jab, and it too little, too late. Mikey’s trainer Robert Garcia looked he was poised to pull him out of the fight in the 9th round when the shelling from Spence got too bad, but he left him in there, hoping that he would turn things around somehow. He didn’t. It continued to be a one-sided fight for the remainder of the contest. Robert might as well have thrown in the towel by the 11th round when it was clear that Mikey had no desire to try and win the fight. He was just looking to go the full 12 rounds, and then claim a moral victory, some boxing fans said after the fight.

Before the fight, Robert and Mikey both said that they had observed something in Spence’s game that they felt they could take advantage of to get the victory. It’s unclear what it was they saw. Lomachenko thinks Mikey saw a paycheck that he wanted against Spence, and that’s why he was so eager to face him. In hindsight, if the check was the only thing Mikey wanted, then he should have campaigned to get the Manny Pacquiao fight, because that’s one he could have gotten. Pacquiao showed a lot of interest in facing the winner of the Spence vs. Garcia fight. But when it turned out to be Spence that got the victory, Pacquiao looked less than excited when he was called out by Spence afterwards. A lot of boxing fans think Pacquiao was hoping that Mikey would win, so he could take the fight with him, and create a lot of fan interest in a winnable match.

If Lomachenko had fought Spence, it would have been just as one-sided a fight. The only way to predict how a fight between Spence and Lomachenko would go would be to look back at Lomachenko’s only career loss against a heavier Orlando Salido in 2014. Lomachenko didn’t like getting hit to the body by Salido, so he held all night long to keep the Mexican warrior from hitting him. It looked bad the way Lomachenko held so frequently. With Lomachenko’s high work rate, Spence would have a good chance of knocking him out, because Loma would exchange with him, and that would be a really bad idea. Jorge Linares knocked Lomachenko down. Spence would be a real problem for Lomachenko if the Ukrainian star was willing to move up to welterweight to fight him. Since that’s not going to happen, one can only assume would be a total wipe-out.

Spence says he’s taken a lot of criticism from angry Mikey Garcia fans since his win over him. Spence says a lot of Mikey’s fans are telling him to move up two weight classes to challenge WBA/WBC middleweight champion Saul Canelo Alvarez for his titles. Spence points out that Mikey was the one that called him out, not the other way around.