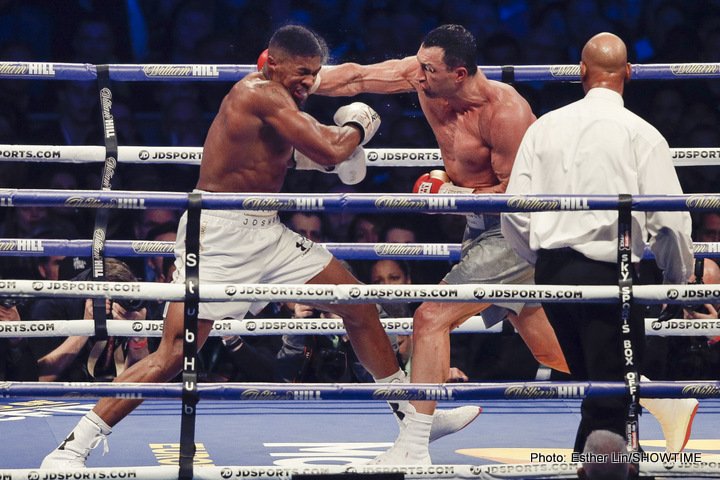 By Mike Smith: Wladimir Klitschko’s former promoter Tom Loeffler says he’d like to see the 42-year-old former unified IBF/WBA/WBO heavyweight champion make a comeback and face unbeaten WBC champion Deontay Wilder. Loeffler believes that Wladimir isn’t happy with the way his career ended with him getting stopped in the 11th round by IBF heavyweight champion Anthony Joshua on April 29, 2017 at Wembley Stadium in London, England.

Before that, Wladimir had lost to Tyson Fury by a 12 round unanimous decision two years earlier in November 2015. Wladimir (64-5, 53 KOs) put himself at a tremendous disadvantage in returning to the ring after 2 year layoff to fight Joshua, without a tune-up, in London, England. Coming back from a two-year layoff off to fight Joshua in his home country in England was a self-defeating move on Wladimir’s part.

If Wladimir makes a comeback now after two years out of the game and faces Wilder next, he would be repeating the same mistake he made against Joshua. If the idea is for Wladimir to come back to fight Wilder just or the payday, then there’s no issues. Wladimir would get his payday against Wilder, and he could go back into retirement.

“Wladimir had such a good championship run that a lot of people want to see him back in the ring,” Loeffler said to Sirius XM. “I don’t know whether he’s content with what he’s accomplished. My personal opinion is I’d like to see him and Deontay Wilder. That would be a tremendous fight.”

It’s unclear if Wladimir is bored now, and needs some excitement that would come from a fight against Wilder, or if he believes he can beat him based on the time that he had him as his sparring partner in 2014. Wilder helped Klitschko prepare for his title defense against Kubrat Pulev five years ago in November 2014. Wladimir likely remembers the sparring sessions with Wilder well, as it was only five years ago that the two sparred.

There’s money that can be made by Wladimir if he faces Wilder, and if he signs a small contract with DAZN.

Wilder said recently that he’s not interested in giving Wladimir a title shot unless he comes back, and earns the fight by beating some guys. Wilder notes that Wladimir was out 2 years before facing Joshua in 2017, and now he’s been out for another two years since then. Wilder thinks Wladimir won’t be the same guy he was that fought Joshua, and he looked like he had deteriorated from his prime in that fight due his inactivity. It’s possible Wilder will change his mind about now wanting to fight Wladimir if he’s given a big enough pay day.

Klitschko, 6’6″, has the size, power and the boxing skills to give Wilder a lot of problems if he can avoid getting hit with one of his big right hands. An out of shape and rusty Tyson Fury gave Wilder all he could handle last December in fighting to a 12 round draw against him at the Staples Center in Los Angeles, California. If Fury hadn’t run out of gas and gotten sloppy in the championship rounds, he would have won the fight. Fury clearly got tired, and fought in a sloppy manner, allowing Wilder to drop him twice to even out the fight.