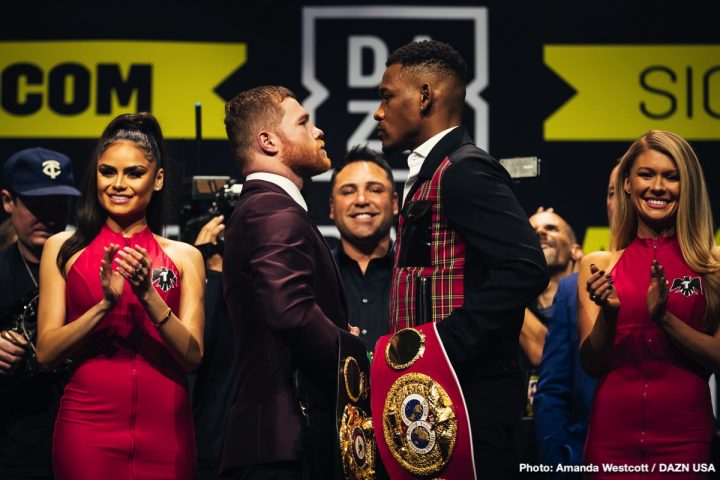 By Sean Jones: Boxing great Shane Mosley thinks it would a good idea for IBF middleweight champion Daniel Jacobs to stay on the outside, use his jab and movement in his unification fight against WBA/WBC champion Saul Canelo Alvarez on May 4 on DAZN at the T-Mobile Arena in Las Vegas, Nevada.

Former three division world champion Mosley (49-10-1, 41 KOs) lost to Canelo by a one-sided 12 round unanimous decision in 2012. Mosley says he was surprised at the time how technical Canelo was for a 20-year-old fighter. The talented Mexican fighter was trying all kinds of different things in the fight, and showing him different looks that much experienced fighter would.

“I think he’ll use his height and his size, because that’s the way he fights,” Mosley said to Fighthub. “Seems like he fights with throwing the jab, everything off the jab, the right hand, and the long shots, and he’s powerful like that. So if Canelo falls to sleep he could get caught with something pretty big. And I think Jacobs has that type of power that can knock you out.”

It’s clear that Jacobs will need to make sure he stays on the outside, and uses his reach against Canelo. If he lets Alvarez (51-1-2, 35 KOs) get on the inside against him, the way that Gennady Golovkin did last September, he’s going to have some problems with his hand speed and counter punching ability. The way to beat a counter puncher is to jab and move, and not let them have anything to counter but jabs. Those are a lot harder to counter than power shots. Canelo looked helpless against GGG in the first fight. Unfortunately for Golovkin, the crew of judges that worked the first fight didn’t give him credit for controlling the fight on the outside. Golovkin had the right game plan to win, but not with the three judges that worked the fight that night at the T-Mobile Arena. Floyd Mayweather Jr. used the same plan GGG did against Canelo, but he was given a win over him. Golovkin ended up with a draw. In the Canelo-Golovkin rematch, GGG let Canelo walk him down and throw power shots on the inside. It worked in Canelo’s favor for the first part of the fight. Canelo gassed out in the second half of the contest, and was hurt twice by Golovkin. The judges still gave Canelo the win. In the eyes of many boxing fans, the fight was a draw, and not a win for Canelo.

“I’m not sure how Canelo’s going to get inside and use his counter body shots and things like that, and how’s he going to try to bully Jacobs,” Mosley said.

Canelo is obviously going to try and walk Jacobs down in the same way he did in his last fight against WBA World super middleweight champion Rocky Fielding last December, and in his rematch Golovkin. Some boxing fans believe the judges gave Canelo win over GGG just because the Kazakh fighter was backing up. If Jacobs backs up under pressure from Canelo, that might be enough for the Golden Boy Promotions star to get the victory. Jacobs will need to do more than jab and move if he wants to beat a superstar like Canelo. Jacobs is going to need to make sure he lands power shots, and gets the better of him during the exchanges. In a perfect world, there won’t be any controversy in the Canelo-Jacobs fight like there was in his two fights against GGG, but there may well be unless the match is one-sided either way. Jacobs has to know that he’s the B-side fighter in this match-up, so it’s going to be harder for him to get the win. Jacobs, 32, is coming into Canelo’s venue at the T-Mobile Arena in Las Vegas, and this is the same place where both of the controversial Canelo-GGG fights took place. Given the recent history, it’s unknown why Alvarez and Golden Boy would want to go back to the T-Mobile for a fight against Jacobs. If the fight ends up in controversy with Canelo being given a draw or a win that the boxing public feels he didn’t deserve, a lot of the fans will likely say he was given preferential treatment.

“I don’t know if that’ll be a good idea for Jacobs because Canelo’s really fast and a counter-puncher,” Mosley said about it being a bad idea for Jacobs to try and walk Canelo down. “And that’s what GGG did already. So now there has to be something different. I don’t think Jacobs’ style is like GGG’s style, as far as strength — that’s not his strong point, coming at a guy. His strong point is, maybe, toe-to-toe or maybe a little bit to the side, side-stepping. That’s why he had a good time with GGG,” Mosley said.

Golovkin had to try something different in the second fight with Canelo after finding out the hard way that he wasn’t given a win over him by staying on the outside jabbing in the first fight. Jacobs would do well if he throws flurries against like he did against Peter Quillin. Canelo can counter single shots, but he’s not good at countering flurries. Canelo gets tired, and his power drops off to nothing when he gets caught in long exchanges. Canelo’s defense also isn’t the same when he’s dealing with more three punches being thrown in a row. He gets hit. Jacobs has equal speed, and he hits harder. If Jacobs chooses to unload on Canelo with three or four flurries per round, he could take him out. In between the judge-pleasing flurries, Jacobs could stay on the outside and jab the shorter-armed Canelo to keep him from landing his power shots. If Jacobs throws single shots or left-right combinations, then Canelo will counter him, and do well. If Jacobs throws flurries, he’ll be a problem for Canelo.

“It’s going to be a tough fight for Canelo because is a long fighter, throws long jabs, good right hands, and even GGG had a hard time trying to attack,” Mosley said. “So, I’m not sure how Canelo’s going to be able to get inside, even though I know he’s fast enough and knows how to move and duck. But how will he be able to get inside and get those shots off on Jacobs?” Mosley said.

It’s going to be very hard for Canelo to get inside unless Jacobs is stationary the way Golovkin was when he would get to the center of the ring. The problem is, Jacobs can’t move too much if he wants to have a chance of winning a decision against the home fighter Canelo. But if Jacobs stands stationary, throwing one or two shots at a time, then Canelo will work his way in close or he’ll counter his single or double digit shots, and dominate the fight. Jacobs is in a tough position. He can’t just jab and hope that the judges will give him the decision, because that didn’t work when Golovkin tried it against the Golden Boy star. If Jacobs stays in one place and only one or two power shots at a time, Canelo will counter him with hard punches, and work him over with body shots. Jacobs will problems winning rounds if Canelo landing the better shots. Even though both fighters are world champions, Jacobs needs to see himself as the challenger in this fight, and coming to try and take the titles from the champion. To beat a champion, you’ve got to do more than judge squeak by. You’ve got to dominate, and the only way Jacobs can do that is to open up on Canelo the same way he did against Quillin in knocking him out in the first round in their fight in 2015.