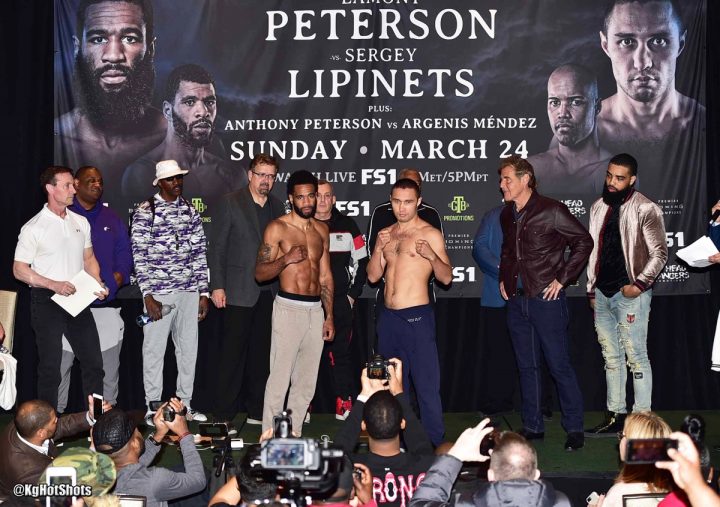 Whereas Lipinets faces former two-division world titlist Lamont Peterson (35-4-1, 17 KOs) in a match-up that could have a seismic impact on their respective careers and divisional rankings, Porter offers a unique perspective on this fight having participated in Peterson’s training camp in preparation for Lipinets.

Here’s what Lipinets (via interpreter) and Porter had to say during our brief interviews:

Boxing News 24 (BN24): Your fight against Lamont Peterson on Sunday is a big fight for both of you at this point in your respective careers. How has your training and preparation been going leading into this fight?

Sergey Lipinets (SL): It is a huge fight, no doubt about it. And, thank God, the preparation was great. Great sparring partners. We had four different sparring partners and we went through [camp] with no injuries, no bumps, no bruises. Everything was great.

BN24: Lamont had some trouble in his last fight against Errol Spence Jr., while you also experienced a setback against Mikey Garcia in 2018. Nevertheless, what kind of fight are you expecting from Lamont?

SL: I’m sure that Lamont is ready for the fight.  That he lost to Errol [Spence] has nothing to do with this upcoming fight.  He had time to get ready, and I think he got ready.  And wherever that fight is going to take us, in the middle of the ring, on the ropes, whatever game[plan] he’s going to come up with, I’m going to have to adapt. I’m going to have to adjust and it’s going to be a great fight.

BN24: Should you get by Lamont in this fight, what is the plan moving forward?

SL: I don’t want to look past Lamont, no matter what it is. If I get past Lamont then we’ll start thinking about somebody else.  Right now, all my thoughts are on Lamont Peterson.  That’s all there is to it.

BN24: Without giving away your strategy, in terms of the game plan, what’s your approach to beating Lamont?  Are there any holes that you see in his game that you can take advantage of?

SL:  No matter what it is, no matter what Lamont is going to do, I believe that I need to be ready for it. I have a great corner and a great trainer.  I believe that all I have to do is follow my trainer and whatever my corner is telling me to do and that’s about it.

BN24: Thank you for taking time out to speak with us and we wish you the best of luck on Sunday night.

Boxing News 24 (BN24):  Shawn, I know that you’ve been in Lamont’s camp for this fight.  So how do you see Peterson vs. Lipinets playing out?

Shawn Porter (SP): I don’t know that game plan.  So, from my perspective, I know that Lamont can punch and he can box.  I think he’s going to try to box and maybe work his way into punching.

I know the only way that Lipinets can beat him is by being really aggressive and trying to stay on him through the course of 12 rounds, which is hard to do against somebody like Lamont Peterson that has a stinger in both hands.

BN24: Who do you see ultimately winning the fight on Sunday?

SP: Lamont by decision.  I think he’s going to outbox [Lipinets] and keep him off of him.

BN24: Switching gears, your recent fight with Ugas was a tough one that you were able to win by decision.  How was that experience for you?

SP: The experience for me was an opportunity for me to do some different things.  Be able to think more and recognize more through the course of a fight.

Honestly, even though you guys see the aggressive style, a lot of times, I am thinking and it’s calculated.  But it’s a lot faster than the pace that I fought at the other night.

Moving forward, I believe that mixing the two together, the aggression with the boxing ability of the other night, you got a great fighter in Shawn Porter.

BN24: Looking ahead, I’ve seen you on the Inside PBC show mention Errol Spence as a fight that interests you.  Is that really who you’re looking for next?

SP: That’s the ONLY thing for me.  I think that that’s what’s going to be next.  I don’t really see Manny Pacquiao stepping up and taking on Errol Spence or myself.  I think that if Manny were to choose between the two of us, he might go with me on the count of me doing something a little different in the ring and not really showing what everyone’s seen in the past.  And Errol looked really good against Mikey Garcia.

And I think myself and Errol, that’s what going to be next.

BN24: Do you believe that Keith Thurman is avoiding you? Or is that fight still an option?

SP: I think he has… really. Not just me, but boxing in general.

But I know firsthand that he’s got some other things that he’s dealing with, and I’m not going to disrespect him and say, “he’s ducking me” or “he doesn’t want to fight me.”

I’m just going to move forward and look at other guys like Errol Spence and Manny Pacquiao.

BN24: If you and Spence were to fight, do you see that fight happening later this year, in 2020, or on some other timeline?

SP: I’m thinking, summer. [I] just interviewed him on inside PBC the other night and he said that he wanted to stay busy and July or August would work for him.

Not that I’m on his timeline, but whatever I need to do to make it work.

BN24: Thank you so much Shawn for your time and best of luck in the future!

SP: You got it. Thank you.

Paul R. Jones! is a boxing writer and ringside photographer for Boxing News 24. A scientist by day and boxing writer by night, he covers the humorous, offbeat, and absurd from the sport of boxing. Paul’s articles have appeared in PEDIATRICS, Race and Social Problems, and Motivation and Emotion, and he’s covered boxing online for East Side Boxing, BOXINGINSIDER, TheFightJournal, and WRAPSONTV.

You can keep up with more of what Paul R. Jones! is thinking about on  Twitter @boxingepicenter, YouTube, and Medium.com. Or e-mail him at prjones1@hotmail.com for bookings or inquiries.

■ 2 Biggest Things We Learned From Watching Kovalev vs. Álvarez